Chancellor Angela Merkel warned Germany was "already in a phase of exponential growth." Rules on wearing face masks and on how many people can meet have been tightened. 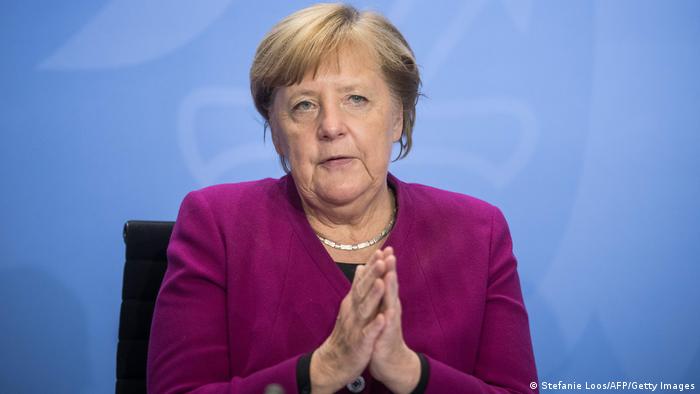 Germany on Wednesday announced tougher new restrictions on public life as it enters a "decisive" stage in its efforts to combat a surge in coronavirus infections.

The federal and state governments have agreed on "considerable restrictions" on contact between citizens in view of the increasing number of COVID-19 cases.

The measures, which include limits on the number of people at private gatherings and a curfew for bars and restaurants in areas deemed hotspots, were agreed following an eight-hour meeting between German Chancellor Angela Merkel and the country's 16 state premiers.

"I am convinced that what we do now will be decisive for how we come through this pandemic," Merkel said.

"We are already in a phase of exponential growth, the daily numbers show that," she added.

Merkel appealed to the country's younger citizens, urging them to avoid parties for now so that they can enjoy life later. "We must call especially on young people to do without a few parties now in order to have a good life tomorrow or the day after," she said.

"We've come a long way. But whether it's enough remains to be seen," said Bavarian state premier Markus Söder.

The new measures came as Germany posted a record daily increase in confirmed cases on Thursday, adding 6,638 cases and bringing the total to 341,223, according to data from the Robert Koch Institute for infectious diseases.

What new restrictions are Germans facing?

In regions deemed to be hotspots, all gatherings will be limited to just 10 people, while gatherings in private spaces can only consist of a maximum of two households.

A hotspot is defined as an area that records 50 new infections per 100,000 people over a seven-day period.

Meanwhile, pubs and restaurants in areas deemed as hotspots will have to close by 11 p.m. In hotspots like Berlin and Frankfurt, this regulation already applies.

The 16 federal states could not reach a consensus regarding visitors from the hotspots within Germany so a decision on the issue has been postponed until November 8.

Rules on face masks have also been tightened. In regions with more than 35 infections per 100,000 inhabitants, face masks will be required in all public areas where people are closely packed together. If the region becomes a hotspot, those restrictions could be tightened further.

Several cities around Germany have already reached this higher limit, including Berlin, Frankfurt and Cologne.

Merkel also announced Germany's plans to help any businesses hit by the new rules. Following the meeting, Merkel warned that further restrictions could be imposed if the current upwards trajectory in new case numbers continues.

Merkel has repeatedly said she wants to avoid renewed shutdown of social and economic life like in spring.

Lothar Wieler, the head of Germany's disease control agency RKI, meanwhile urged vulnerable groups to get their seasonal flu shots this year to avoid overwhelming the health system with both flu and COVID-19 illnesses.

"We're in a situation where I think we can still flatten the exponential growth but for that we all need to make an effort," he said.

Health Minister Jens Spahn announced on Wednesday that Germany has ordered an additional 6 million doses of flu vaccine so that as many people as possible can have access to the shot.

The new order brings the total of flu vaccine doses up to 26 million, which is almost twice as many as were used last season, Spahn said.

The Netherlands is going into a partial lockdown for at least four weeks. Meanwhile, Italy has imposed new restrictions on public gatherings, restaurants, sports and school activities. Here is the latest from DW.