Opinion: The coronavirus has not gone away — and we all need to fight it

The virus is still among us, and it cannot really be said that Germany has the pandemic in check. Clarity about regulations is vital if people's trust in political decision-making is not to be lost, says Jens Thurau. 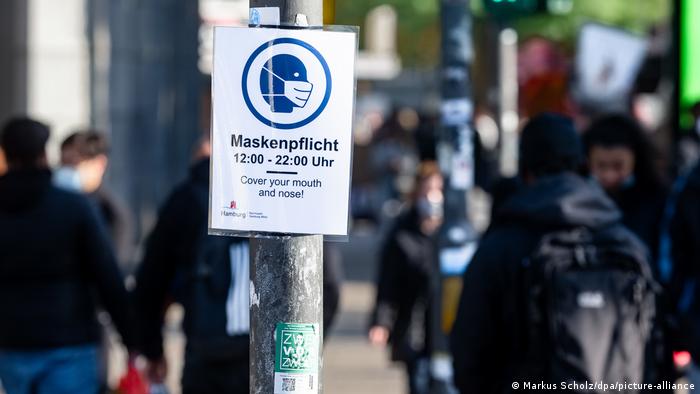 German Chancellor Angela Merkel insisted that Wednesday's meeting with premiers from Germany's 16 states should not take place via video, as has been the case for some time now, but that they all should come to Berlin in person. It was billed in advance as a "historic" meeting, making it sound as though it was called to decide on war or peace.

Of course, the meeting was not meant to be quite about that. But the factors that have up to now allowed Germany to make a strong showing during the pandemic — its federal structure, the ability to take into account the fact that regions had and still have differing numbers of coronavirus infections — have now become a problem.

It is true, for example, that Mecklenburg-Vorpommern was and is much less affected by the pandemic than, say, Bavaria. For a long while, it made sense having different measures in place in the different regions. But that is no longer the case.

The pandemic remains: Can we do it?

Because now Germans are also realizing that the pandemic is not just a problem for 2020. The virus will cause massive changes to Germany. Certainties and privileges are being called into question; social solidarity, which has long been in decline anyway, is being put to a hard test. "We can do this," Merkel told Germany five years ago during the refugee crisis. But will these words be true of the pandemic?

At present, German leaders, like those in many other countries, are being guided by the notion that a radical lockdown like the one early this year should be avoided. What the public is being told is this: We have learned a lot about the virus; we are testing more than we did several months ago; we don't think we can call on the economy, the arts and culture sector or society in general to accept another lockdown. But we have to impose some restraints again, as the number of infections is climbing.

The pitfalls of federalism

But, broadly speaking, what is happening at this moment is that everyone is doing what they want to or what they think is appropriate. Many German states have made it illegal to provide accommodation to people who come from regions in which the critical number of infections has been exceeded. Those regions, of course, are often big cities. The "accommodation bans" are understandable from the point of view of those wanting to avoid infection from outside, but they are not uniform across Germany.

Read more:  Coronavirus in Germany: How the federal system hampers the fight against the pandemic

What is missing at the moment is any close connection between policy and science. Leading virologists say that the problem is not domestic tourism, but private parties attended by lots of people who do not observe distancing or hygiene rules. But many states are sticking to their guns and not letting travelers from high-infection regions stay in their hotels.

Laying out a common course

Germany has always had a federal mindset. A number of commentators have recently called to mind the pronounced German regionalism that existed many years ago. But if Germany is to get through this pandemic without too much damage, more centralism is needed — a thorny problem in a country that is characterized by strong regions and state premiers.

Now, everything depends on Angela Merkel. She has to call the shots and set the course. Wednesday's meeting has been a first step, resulting in stricter rules on wearing masks and holding gatherings in badly hit regions. An overwhelming majority of people in Germany is already observing the previous rules on distancing and will also back the stricter regulations. Solidarity must not be put in jeopardy.

Drought in Europe: Rainfall will not affect low water levels in Germany's rivers 5h ago