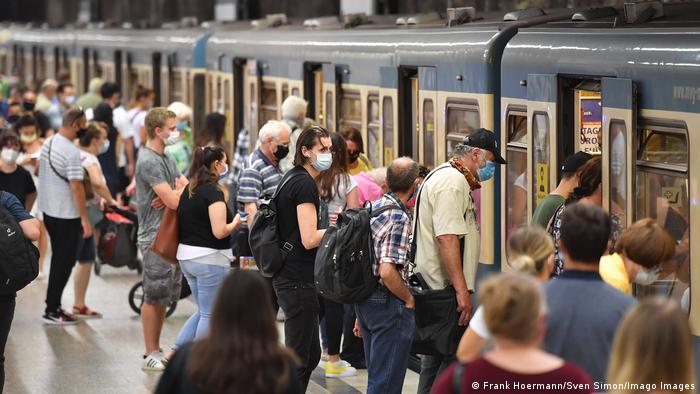 The Bavarian city of Munich on Monday joined Germany's list of urban centers to breach a key limit for coronavirus infections.

Data from the Robert Koch Institute showed the number of cases per 100,000 residents over a seven-day period stood at 50.6. It is the second time in less than a month that the city has crossed the 50 threshold, despite strict measures to contain the disease.

Gatherings in private and public spaces in Munich are subject to a 10-person limit, while events such as weddings and birthdays can have no more than 25 people in attendance. Curbs on alcohol consumption are also in place.

Other cities which have exceeded the threshold:

Earlier this week, Chancellor Angela Merkel entered talks with the mayors of Germany's 11 largest cities and agreed to toughen restrictions if the number of COVID-19 cases passed the 50-mark.

Merkel's chief of staff, Helge Braun, told public broadcaster ARD that Germany must "be a bit stricter in places where infection chains spread mostly, which is parties and, unfortunately, also travel."

New restrictions have come into force in the cities that have crossed the threshold, although rules vary slightly from place to place.

In Essen, where the total infections per 100,000 residents reached 57.3 on Sunday, the number of people allowed to meet for private celebrations and gatherings was reduced from 50 to 25. Unlike Berlin and Cologne, however, Essen has not introduced a night-time curfew.

Infection rates across Germany have risen significantly over the past week.

The Robert Koch Institute (RKI) on Monday recorded 2,467 new coronavirus cases and 6 deaths related to the virus, bringing the total number of infections to 325,331 and the death toll to 9,621.

Germany's largest LGBT+ Christopher Street Day parade went ahead after being postponed because of the pandemic. Organizers found a solution to ensure social distancing — participants attended on bicycle.