Researchers say they are surprised at the number of people who have offered to take part, as they usually struggle to find enough guinea pigs. The study will test the success of a COVID-19 vaccine developed by CureVac. 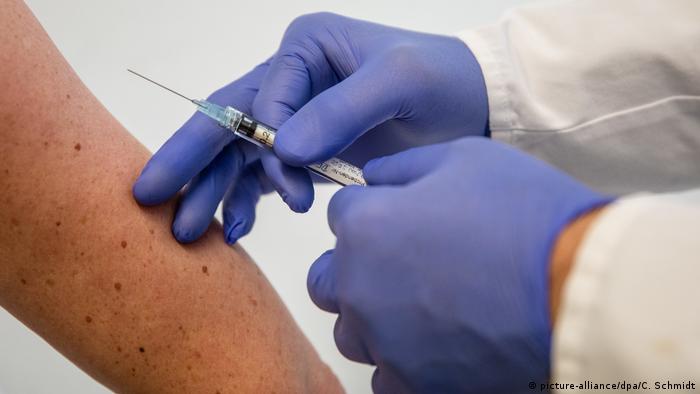 Some 4,000 people have so far registered to take part in coronavirus vaccination trials at Germany's University Hospital in Tübingen, near the southwestern city of Stuttgart.

Researchers say the large number of potential volunteers came as a surprise, as they normally struggle to find enough people to take part in medical studies.

A clinical study began in mid-June to test the tolerability of a vaccine developed by the German biopharmaceutical company CureVac.

Since then, around 50 people have received the drug. According to Kremsner, no surprising side effects have yet been noticed.

The large number of volunteers means that they will not all be able to participate in the trial. The study intends to test 168 subjects in total.

In addition to Tübingen, tests will go ahead in the German cities of Hanover, Munich and Ghent in Belgium.

If the phase 1 trial is successful, studies with significantly more test subjects will follow.

How will the vaccine work?

The Tübingen-based CureVac is working on a mRNA-vaccine. A type of messenger molecule, mRNA carries instructions for the creation of proteins.

For this vaccine, the researchers have given the mRNA building instructions to make a novel coronavirus protein.

Once vaccinated, the human cells will produce this protein, which the body will then recognize as foreign. It will then form antibodies and other immune resistance against it.

CureVac will receive €75 million ($84.7 million) in loans from the European Investment Bank (EIB), the bank announced on Monday.

The money will help the company complete a production facility and support the development and mass production of a vaccine.

The German government announced in June that it would acquire a €300 million stake in the firm.

The first results from the clinical trial are expected in August, said the company.

India's top health agency has reported that the country should have a coronavirus vaccine ready in time for Independence Day on August 15. Experts warn that the short time line is both unrealistic and dangerous. (08.07.2020)

The world's wealthiest countries are competing for remdesivir, despite assurances that they would work together to develop drugs that treat COVID-19. Pharmaceuticals giant Gilead Sciences is in an enviable position. (02.07.2020)