How lab animals have fared in the coronavirus crisis | Science | In-depth reporting on science and technology | DW | 01.07.2020 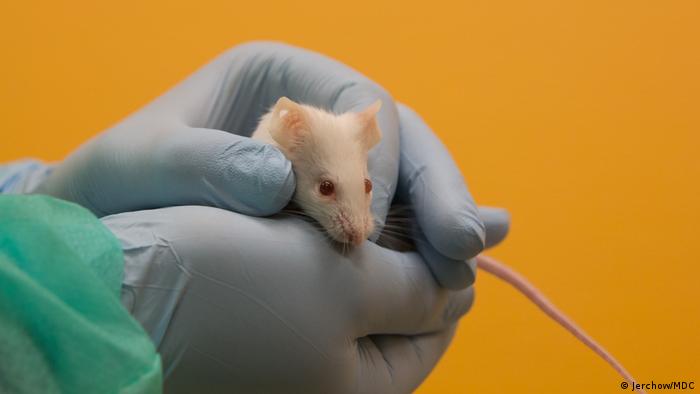 At a time when most of us had not even thought of panic-buying toilet paper, Andreas Lengeling was stocking up on boxes of hay and aspen wood bedding, food pellets and veterinary drugs. He did not want to rely on external suppliers for the following three months. It was the end of February, and he was bracing himself for the coronavirus pandemic to hit Germany.

As the animal research and welfare officer at the Max Planck Society, Lengeling's main responsibility is to ensure that the 65 species of animals housed across its research institutes in Germany and abroad are well cared for. These include insects, rodents, fishes, clawed frogs, song birds and larger vertebrates like alpacas.

In March, US-based researchers gave accounts of how lockdowns and stay-in-place orders made it difficult to take care of lab animals. Thousands of mice have been culled. This is partly due to staff shortages as older and vulnerable people resort to working from home. Most experiments have also ground to a halt. A researcher in Colombia even carried 100 turtle eggs to her house to protect them.

"I'm absolutely concerned about these reports," says Lengeling. "It's really heartbreaking to hear." 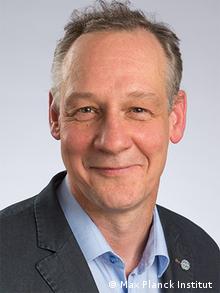 But he reports that the situation has not been as dire in Germany.

"We reacted really early," says Lengeling. "At the end of February, we were already adapting our emergency plans to the pandemic scenario. We were really well-prepared."

Other institutes took early note as well. At the German Research Center for Environmental Health (HMGU) in Munich, where scientists work with rodents and fish, all new experiments were put on hold. Animals were, however, saved because of excellent cooperation between animal caretakers, scientists, animal welfare officers and the crisis management team, according to Johannes Beckers, an HMGU research group leader.

But not every institute in Germany acted in time to rescue test animals.  The Max Delbrück Center for Molecular Medicine (MDC) in Berlin reported that 1,500 young mice and rats were euthanized as a consequence of the disruption caused by the pandemic. This is because most mice and rats used in experiments have to be at a specific age depending on what is being researched. These particular animals were too young to be used in experiments and will be too old by the time experiments resume. 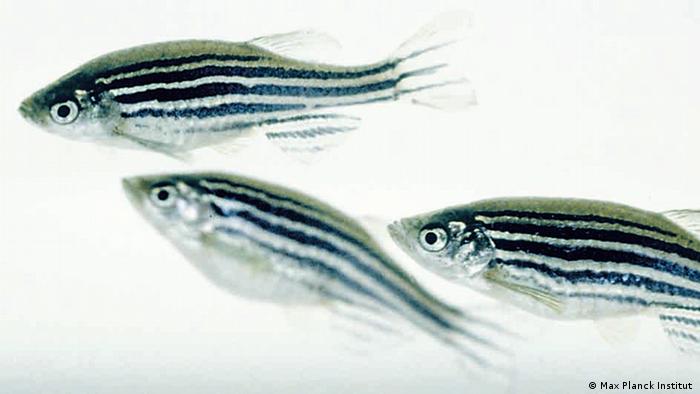 The MDC's press officer, Jutta Kramm, says that staff have, however, remained dedicated to maintaining the welfare of animals within their facility. "All suitable employees work in shifts to provide food and water to the animals and to clean the cages," she says.

The German Cancer Research Center has had to reduce the number of rodents in its care, too. But its response to DW's query on how many animals this might have involved is pending.

The pandemic has posed a particularly difficult challenge to research labs that work with non-human primates such as rhesus macaques and marmosets. That is because there is a risk of humans transmitting a SARS-CoV-2 infection to monkeys in a so-called cross-infection.

This threat has had a large impact on researcher Sabine Borchert's life. As a technical assistant at the German Primate Center in Göttingen, Borchert typically spends several hours each day training macaque monkeys for experiments. She needs to learn what each monkey likes and dislikes eating, how each of them react to different situations and when changes in their behavior begin to signal stress. "When you walk into the department, you don't know what will happen that day," she says. "It's like having children."

But during the pandemic, scientists and assistants have split into mixed groups of two that work alternate weeks, minimizing contact among themselves and with the animals. This means Borchert sees far less of Ralph, Millhouse and Barney.

In the lab, led by Hansjörg Scherberger, monkeys learn to grasp objects of different shapes and sizes so that researchers can decode how the brain controls movements of the hands and fingers. Many monkeys have taken months and even years to learn these tasks. If they now spend an extensive period without practice, it is hard to say how long they will retain the abilities they have learned.

"I think they won't forget everything. But it will take weeks to get their performance back up again," says Borchert. This does mean, however, that doctoral and postdoctoral projects will be delayed by weeks or months.

Finding out which species of animals face the risk of getting infected by SARS-CoV-2 is, in its turn, the job of Andreas Lengeling in Munich. He digs through old literature on coronaviruses and sets up alerts on PubMed to track the release of new research papers. He shares his findings with veterinarians across the many Max Planck institutes to drive decisions. 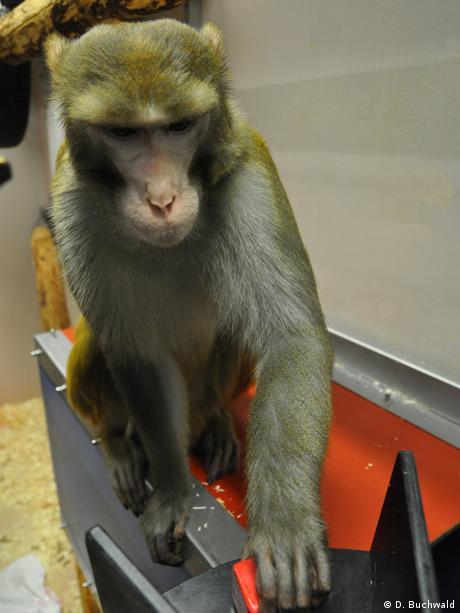 A rhesus macaque is learning to grasp objects of different shapes and sizes at German Primate Centre (DPZ) in Göttingen.

"Luckily, it looks like most of the animal species cannot be infected by the [new] coronavirus," says Lengeling. "But there are a few exceptions." Cats, hamsters, ferrets, minks and non-human primates can get sick. In macaque monkeys, the illness presents as mild, cold-like symptoms. Other animals, as of now, appear to be resistant to any natural transmission of SARS-CoV-2.

A recent study by Sinovac Biotech, a private Beijing-based company currently racing to develop the first coronavirus vaccine, showed that its vaccine—containing an inactivated form of the virus—makes macaque monkeys immune to a second infection. But this finding must be taken with a pinch of salt: As symptoms of COVID-19 in humans are far more damaging and severe, the animal and human systems are not necessarily comparable.

These tests of COVID-19 vaccines on animals and the news that many lab rats have been culled has fueled an old and ongoing debate. Those who do not support animal testing to gain scientific knowledge and say the cruelty it entails outweighs its benefits have initiated online petitions and started threads on Reddit.

But Ulrich Kalinke, a professor at the Institute for Experimental Infection Research in Hanover, makes a clear case for continuing animal testing. He says that developing a vaccine without an infection model is not only dangerous, but difficult.

"I feel tremendous pressure," says Kalinke. "We need a vaccine. But if you try to address those questions only in humans, without putting humans in danger, you would have to start with very, very low dosages of vaccine. This would take ages."

And time is of the essence in this fight against the novel coronavirus.

In the past, there has been no dearth of examples where the use of new vaccines has gone wrong. In 1966, a clinical trial of a vaccine against respiratory syncytial virus in the US met a disastrous end when it resulted in the death of two infants. More recently, an oral vaccine for polio, given widely to low and middle-income families across the world, was discovered to have caused many cases of the disease instead. 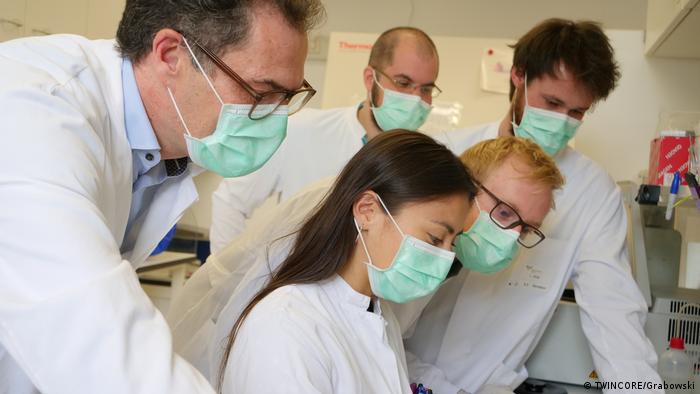 Kalinke says that the scientific community has learned from such failures. He also wants to avoid a scenario where one individual out of every 1,000 vaccinated comes down with adverse effects, when prior testing in animals can prevent this from happening.

In the project TWINCORE, he is leading the development of a mouse model of COVID-19 that will show the same pathology of the disease as seen in humans. The idea is to then inject vaccines and test what kind of immunity is created throughout the bodies of mice.

Kalinke said the mass inoculation needed to curb the coronavirus pandemic across the globe means that safety concerns are paramount: "We are speculating that there will be the need to vaccinate maybe one or two-thirds of the whole world population. So we had better know that the vaccine is safe."

Rapid development of an inactivated vaccine for SARS-CoV-2