Can India really have a coronavirus vaccine ready by August? | Asia | An in-depth look at news from across the continent | DW | 08.07.2020

India's top health agency has reported that the country should have a coronavirus vaccine ready in time for Independence Day on August 15. Experts warn that the short time line is both unrealistic and dangerous. 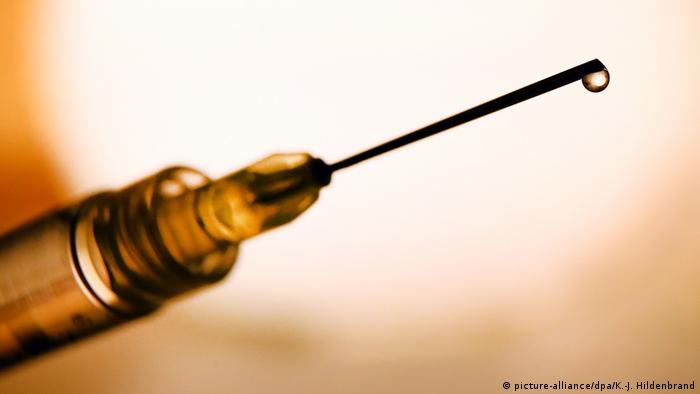 Last week, the director of the Indian Council of Medical Research (ICMR), Balram Bhargava, ordered 12 hospitals to begin clinical trials of India's coronavirus candidate vaccine, Covaxin, with the goal of having it ready for public use by August 15.

Even the expedited timeframe being touted around the world for having a coronavirus vaccine by early 2021 would already be the fastest a vaccine has ever been developed.

The Indian candidate vaccine, Covaxin, is being developed by Bharat Biotech, a Hyderabad-based pharmaceutical company, in partnership with the National Institute of Virology, an ICMR laboratory.

The first phase of clinical trials, set to begin this week, will involve around 300 people, and the subsequent phase will add another 700, according to the earmarked hospitals.

"Bharat Biotech is working expeditiously to meet the target. However, the final outcome will depend on the cooperation of all clinical trial sites involved," said Bhargava in a letter. "Non-compliance will be viewed very seriously," he added.

Bharat Biotech produces billions of vaccine doses fighting infections including rotavirus and hepatitis. In 2015, the manufacturer produced the first India-made rotavirus vaccine priced at $1 (€0.89) a dose and now part of the World Health Organization's immunization program.

"We are all working day and night to meet the deadline, but it will be a tight race," said Prabhakar Reddy, a professor at Nizam's Institute of Medical Sciences, one of the institutions selected for trials.

Vaccine development takes place in phased clinical trials, each with more test subjects to determine if a vaccine candidate produces the desired antibody response with a correspondingly low level of side effects.

The release target set by the ICMR for Covaxin has been criticized by experts and scientists as being done on an audaciously hurried timeline.

However, experts maintain that even a year is an extremely ambitious time frame to complete three phases of clinical trials, efficacy studies, side-effect profiles and antibody analyses.

Side effects of rushing

India's foremost scientific institution, the Indian Academy of Sciences, in a statement said the ICMR's timeline has raised unrealistic hopes and expectations among Indians.

"The academy strongly believes that any hasty solution that would compromise rigorous scientific processes and standards will likely have long-term adverse impacts of unforeseen magnitude on the citizens of India," the academy's president, Partha Majumder, said in a statement.

Anant Bhan, a researcher in bioethics and global health, told DW that recruiting trial participants can take months, even in the expedited process brought on by COVID-19.

"Even with accelerated timelines, this seems rushed, and hence with potential risks, inadequate attention to the process," he said.

The Ebola vaccine, for instance, also saw an expedited global response. Work commenced in 2014, but it was five years before an effective vaccine was licensed.

Politics ahead of public health?

Some experts interpreted the ICMR diktat as being a political ploy for Prime Minister Narendra Modi to win points by being able to announce an Indian vaccine to the nation during his Independence Day speech on August 15.

"Why is the ICMR rushing for an unrealistic timeline of August 15 for an Indian coronavirus vaccine when global experts are giving a 12 to 18-month time frame," the opposition Congress party leader Pritbhviraj Chavan tweeted.

Following public outcry, the ICMR sought to backtrack and clarify its comments, saying that the August date was "not a deadline" and was merely an attempt to cut "red tape" and not an attempt to compromise on safety trials.

"The ICMR's process is exactly in accordance with globally accepted norms to fast-track vaccine development," an ICMR statement said.

After crossing the 700,000-mark last week, India now has the third-highest COVID-19 caseload in the world, after the US and Brazil.

While recovery rates are encouraging, the spread of the disease is also picking up speed. So far, India's big cities have been COVID-19 hot spots, but now outbreaks are also being reported in the countryside.

A race toward a vaccine

A global race is underway to develop and mass-produce an effective vaccine against SARS-CoV-2.

There are more than 100 vaccine candidates in pre-clinical development by pharmaceutical companies, academic institutions, government agencies, and others.

According to the WHO, as of July 7, there are 17 vaccine candidates undergoing clinical trials in several countries. Although governments are pre-ordering billions of doses of promising candidates, no vaccine is expected to be approved for use over the next several months.

"The public's trust and scientific enterprise should not be compromised by outlandish claims," said Indian scientist Navaneetha Rao.

Coronavirus: WHO calls for vaccine to be shared 'for public good'

The WHO has said any coronavirus vaccine should be shared between countries as a public good, and that new mothers with COVID-19 can still breast-feed their babies. All the latest from DW here. (12.06.2020)

With few people vaccinated, an overwhelmed medical service, and generally poor health among its population, virologists fear North Korea could be the source of dangerous new mutations of the virus.