EU leaders have sparred for weeks over how to best help the eurozone recover from the impact of the coronavirus pandemic. This proposal between Paris and Berlin could signal a way forward. 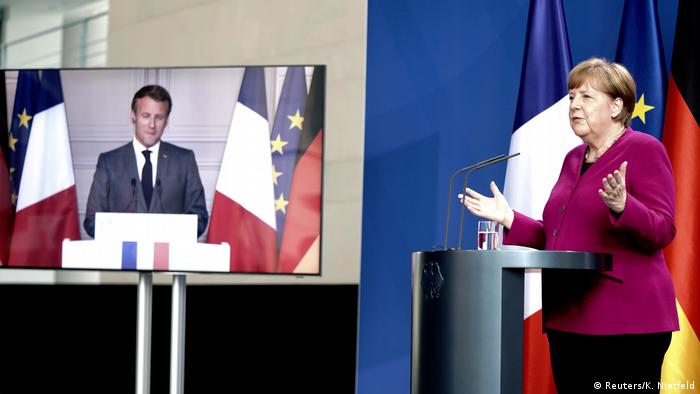 The leaders of France and Germany proposed Monday a one-off €500 billion ($540 billion) rescue fund to help the European Union's economy recover from the impact of the coronavirus crisis. The agreement between the two nations was reached following virtual talks held that afternoon.

Under the proposal, the funds would be given as grants to hardest-hit sectors and regions in the EU.

The 27 EU countries would also borrow together on financial markets to raise the funds. The proposed €500 billion in grants would be in addition to the 2021-2027 EU budget that is close to €1 trillion for this period.

The agreement between German Chancellor Angela Merkel and French President Emmanuel Macron — the leaders of the eurozone's two largest economies — may pave the way for a larger deal within the EU.

Monday's announcement follows weeks of debate between EU leaders over which financial mechanisms should be used to rescue their economies. France, Italy and Spain had favored grants, but the governments of the more fiscally conservative nations Germany and the Netherlands had rejected this, preferring the economic recovery to be stimulated by loans.

German Chancellor Angela Merkel said that Monday's plan was a "short-term" response to the crisis and the that long-term solution, including EU reforms, would be discussed later "because Europe must develop further."

"Due to the unusual nature of the crisis we are choosing an unusual path," added Merkel, commenting on the plan.

The joint initiative comes ahead of the European Commission presenting its own proposal for a Recovery Fund linked to the EU's next long-term budget on May 27, to be voted on by the 27 member states. The official proposal had been delayed for several weeks over disagreements on how to fund and distribute the recovery package.

Macron said Paris and Berlin wanted to help ensure unanimity in next week's vote by offering a vision of "the necessity of this response, the mechanism for it, and its scale."

European Commission President Ursula von der Leyen welcomed the proposal in a statement: "It acknowledges the scope and the size of the economic challenge that Europe faces, and rightly puts the emphasis on the need to work on a solution with the European budget at its core."

Austria, however, has insisted that any aid should come in the form of loans — and not grants. "Our position remains unchanged. We are ready to help most affected countries with loans," Austrian Chancellor Sebastian Kurz tweeted on Monday evening, after the announcement.

Spanish Member of European Parliament Luis Garciano, with the Ciudadanos party in Spain that is part of the ALDE liberal alliance in EU Parliament, also welcomed the proposal, saying it was a clear step forward. He also welcomed the change from loans to grants.

Why do EU nations need a Recovery Fund?

The eurozone economy has been hard-bit by the coronavirus pandemic, with economists forecasting a contraction of 7.7% GDP this year after economic activity and output has grounded to a halt.

A first package of short-term loan assistance of up to €540 billion had already been agreed by the EU countries in early April.

The EU has been criticized for its response to the COVID-19 crisis. In recent weeks, the bloc has been scrambling to come up with clear financial plans, but despite huge figures being mentioned, uncertainty remains. (28.04.2020)

An EU summit made previously "unthinkable" progress on the economic response to the COVID-19 crisis, according to Italy's PM. But the leaders are still at odds over several details. Follow DW for the latest. (23.04.2020)

Germany's top diplomat Heiko Maas held a conference with his Mediterranean counterparts to discuss plans for the summer tourism season. Countries like Greece and Croatia have weathered the pandemic relatively well. (18.05.2020)