Social distancing rules in the UK have been extended by a month as delta variant-driven cases continue to rise. Meanwhile, Germany has recorded its lowest daily numbers in months. Follow the latest with DW. 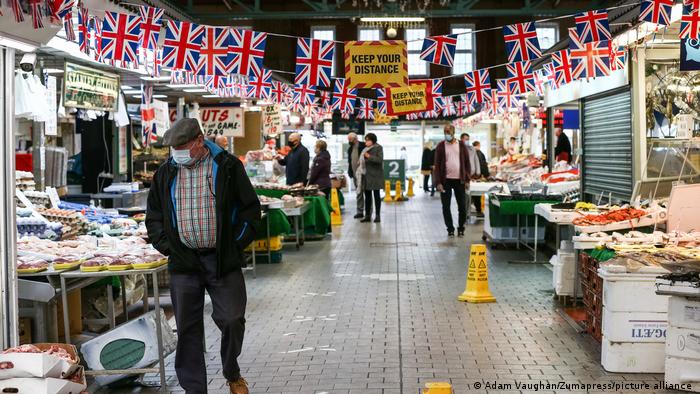 Johnson warned that the more infectious "delta" variant meant that the plan to lift most social restrictions on June
21, such as fully reopening pubs, restaurants, nightclubs and other hospitality venues, would now be postponed until July 19.

"I think it is sensible to wait just a little longer," Johnson told a news conference. "As things stand, and on the evidence that I can see right now. I'm confident that we will not need more than four weeks."

The surge in cases is being blamed on the variant, which was first identified in India.

The final easing of restrictions under the roadmap outlined by Johnson in February would remove "all legal limits on social contact."

However, public health officials expressed concern over a possible third wave caused by the delta variant, which they believe is 60% more transmissible than the previous dominant variant.

Britain recorded 7,490 new cases on Sunday, and eight additional deaths. The number of new infections this week in the UK was 50% higher compared to the week before.

Here's a roundup of other coronavirus news from around the world

Germany's Health Minister Jens Spahn has said the time has come to consider lifting requirements for people to wear facemasks, at least outside in the fresh air.

"With regard to the falling incidence rates, we should proceed in stages: in a first step, the mask requirement outside can basically be abolished," Spahn told newspapers from Germany's Funke Media Group on Monday.  "In regions with a very low incidence rate and a high vaccination rate, the same could be done gradually indoors also."

As the number of infections drop in states across Germany, restrictions on gatherings, gastronomy, sport and culture are also being lifted.

Germany has recorded its lowest number of new daily coronavirus infections in nearly nine months, with 549 cases and 10 deaths in the past 24 hours, according to the Robert Koch Institute (RKI) for infectious diseases.

The current seven-day coronavirus incidence, which records new cases per 100,000 within the time period, is now at 16.6, down from 24.3 a week earlier.

Residents of Denmark are now only required to wear a mask on public transport when they're not sitting as the country lifts rules for mandatory face coverings in almost all public spaces on Monday.

Since spring, Denmark has relaxed several coronavirus restrictions, with almost all of public life open again, except nightclubs, which are due to open their doors again in September.

The number of new infections slightly rose since but did not spike dramatically.

In the last few days, the incidence of infections fell again, with only 315 cases recorded on Sunday — the lowest figure since February, although fewer people than usual got tested on that day.

The government is aiming to remove the mask mandate entirely by September 1.

Russia's St. Petersburg, which is hosting a series of the Euro 2020 football championship matches, is tightening coronavirus restrictions amid a new spike in infections, officials said on Monday.

The city has been Russia's worst hotspot after Moscow and is due to host thousands of football fans from Europe.

Starting Thursday, food courts and children's play areas in shopping malls in St. Petersburg will be closed and no food will be sold at Euro 2020 fan zones.

Cinemas will also be operating at 50% capacity, down from 75% now.

"Guests at all public events including those held in the open air are obliged to use masks," city authorities said.

The state was a COVID-19 hotspot until it reported zero cases on Friday. But over the weekend it recorded single-digit numbers of infections.

The new cases pose little threat to the community as the infected were already in isolation, health authorities said.

Last month, Victoria went into a two-week snap lockdown after it recorded 94 cases. The state emerged from the lockdown on Friday, although some distancing rules remain in place.

India has recorded 70,421 new coronavirus cases over the past 24 hours, the lowest since March 31, according to Reuters news agency. The South Asian country also reported 3,921 deaths overnight.

Thailand has recently launched its coronavirus vaccination campaign as the government received sharp criticism for its handling of the third COVID-19 wave in the country and a slow vaccine rollout.

"There may have been confusion because private hospitals did not check with the Bangkok administration," Health Minister Anutin Charnvirakul told reporters, adding that more doses were being delivered to Bangkok.

Bangkok Governor Aswin Kwanmuang said there had been some "technical errors" in the delivery of the jabs and that the city had notified those who registered between June 15-21.

"We will vaccinate as quickly as possible once we receive the vaccines," Aswin said.

Officials in Indonesia expect a new wave of COVID-19 infections to peak in early July, as the highly transmissible delta variant becomes more dominant in some areas.

Jakarta Governor Anies Baswedan said on Sunday that hospital occupancy rates in the city of 10 million had hit 75%, and infections jumped by 50% in the past week.

A large-scale study in the US and Mexico showed that the vaccine is more than 90% effective against coronavirus variants.

The jab "demonstrated 100% protection against moderate and severe disease, 90.4% efficacy overall," the company said in a statement, adding "the study enrolled 29,960 participants across 119 sites in the U.S. and Mexico to evaluate efficacy, safety and immunogenicity."

"Novavax continues to work with a sense of urgency to complete our regulatory submissions and deliver this vaccine, built on a well understood and proven platform, to a world that is still in great need of vaccines," said Stanley C. Erck, Novavax's president and chief executive.

G7 leaders have endorsed calls for a further investigation into the origins of the coronavirus convened by the World Health Organization.

"We call for a timely, transparent, expert-led, and science-based WHO-convened Phase 2 COVID-19 Origins study including, as recommended by the experts' report, in China," according to the final communique.

Speaking at the close of the G7 summit, British Prime Minister Boris Johnson backed calls for further investigation into the origins of the  pandemic, saying while it doesn't look as if this particular disease came from a lab, the world needs to "keep an open mind."

The hypothesis that SARS-CoV-2 leaked from a Chinese lab, once dismissed by most public health experts, is now being investigated by US intelligence under orders of President Joe Biden.

A joint team of WHO experts and Chinese researchers looking into the origin of the virus had carried out investigations in Wuhan earlier this year, including a visit to the Wuhan Institute of Virology.

However, the investigation was inconclusive, and wasmarred by accusations that the Chinese side had not granted enough access to documents and facilities.

Where COVID-19 all began