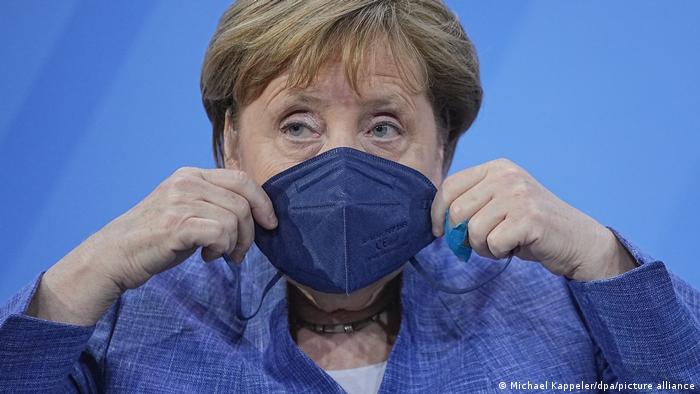 Many parts of Germany are partially reopening, as case numbers drop below critical thresholds to allow outdoor dining and small gatherings. However, larger events are still not allowed.

Merkel said risks remains posed by the Delta variant,  first observed in India and widespread in Britain. She added that increasing vaccinations is critical to fending off its spread.

"We are basically in a race to vaccinate," she said referring to the Delta variant. Merkel spoke after after a videoconference Thursday with the premiers of Germany's 16 federal states.

"The thing that worries us is the so-called Delta variant, which is becoming very prevalent again in the Great Britain," she said.

"We can say that the efforts of the past few months have paid off," she said. "But we shouldn't be careless," she added.

Ahead of Thursday's talks, Berlin's Social Democrat (SPD) Mayor Michael Müller, said the meeting should include discussions about nationwide guidelines on resuming big public events, such as Oktoberfest or Stuttgart's Cannstatter Wasen.

However, Merkel's conservatives and the Greens in Baden-Württemberg excluded the discussion from the agenda, again exposing a rift between political parties on nationwide coronavirus policy.

Ahead of Thursday's consultations, German Health Minister Jens Spahn warned that big events were "unfortunately exactly those where this virus spreads fastest."

However, Thuringia state premier, Bodo Ramelow of the Left party, told Düsseldorf's Rheinische Post newspaper Thursday that  "We can take the risk of the complete opening in the autumn."

Those who did not allow themselves to be vaccinated "must carry the risk and responsibility themselves," Ramalow said.