The "emergency brake" measures include a controversial nighttime curfew and strict limits on social contacts. 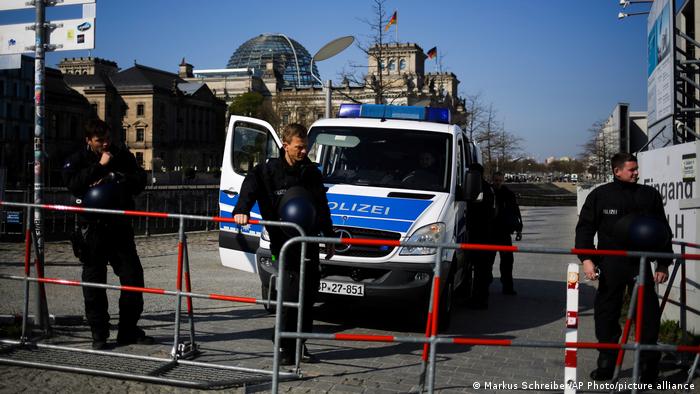 Police secured the area around parliament on Wednesday, anticipating a banned protest which they would later disperse

The national "emergency brake" grants the federal government extra powers if caseloads exceed certain levels, and includes measures such as a nighttime curfew and limits on social contacts.

The new legislation was passed by the German lower house of parliament on Wednesday, before receiving final approval from the upper house — where Germany's 16 states are represented — earlier on Thursday.

The changes to the Infectious Diseases Protection Act is aiming to have some impact on Germany's fight against the third wave of coronavirus infections.

The federal government has been technically in charge of restriction measures, but, in Germany's decentralized structure, the 16 states were largely free to implement those guidelines as they saw fit.

Increasingly, the states have diverged on how to implement measures — leading to disparities across state borders on what rules were in place. Some states were opening up, despite exponential infection growth, while others remained closed. Although this may have won state premiers popularity among voters, it has also seen infection numbers soar.

Faced with such inconsistency, German Chancellor Angela Merkel's government introduced this legislation to legally obligate — rather than cajole — states into specific action in certain circumstances.

The law's approval means that affected districts, with an incidence rate above 100, would be required to implement the new rules, probably starting next week.

Across the country, the average incidence rate was 161.1 on Thursday.

Only one state fell below the 100 threshold, while six exceeded 165 — including the two most populous states of North Rhine-Westphalia and Bavaria.

At some point, the law could be challenged in Germany's Constitutional Court.

The law states that if cities or districts exceed a seven-day incidence rate of 100 new infections per 100,000 inhabitants over three consecutive days, then local authorities must:

The law would be in effect until June 30, with any further changes requiring parliamentary approval.

What are people saying about the law?

Thousands of people were protesting in Berlin on Wednesday against the laws, largely without masks or social distancing. One police estimate put the number of participants at 8,000 people.

Bundestag President Wolfgang Schäuble, from Merkel's CDU party, defended the curfews as proportionate. "A look abroad shows that all countries that have regained control of high infection figures have resorted to curfew restrictions in phases," Schäuble told Berlin's Tagesspiegel newspaper.

The German Association of Towns and Municipalities said the law was important for greater acceptance of the rules. Chief Executive Gerd Landsberg told the Passauer Neue Presse: "It is important that there are now nationwide regulations on what must happen in which infection situation. This is especially crucial for acceptance among the population."

Green Party health expert Janosch Dahmen told the DPA agency: "A uniform federal approach is right, but the measures are not sufficient." He said it should apply at an incidence rate of 50.

Head of the health department at Berlin's district Neukölln, Dr. Nicolai Savaskan, told DW that the federal emergency brake's reliance on a seven-day incidence was "quite unspecific as a signal to detect epidemiological effects."

The German Patient Protection Foundation said that in order to avoid potential legal challenges to the law, the threshold should also consider the vaccination rate of elderly people, and the burden on hospitals.