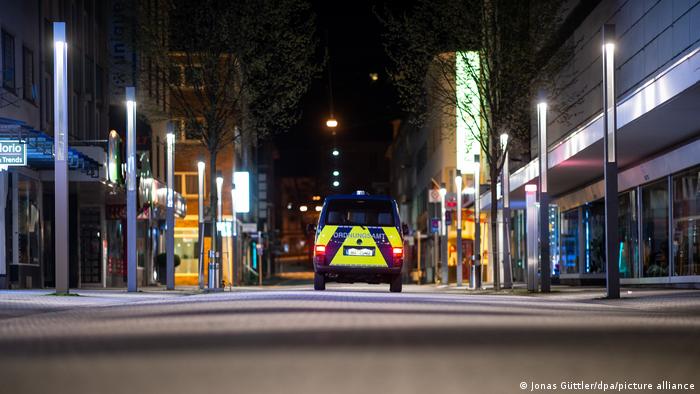 Germany's ruling parties have moved toward finalizing federal coronavirus legislation by agreeing to change curfew rules on Monday. The changes are part of the so-called emergency brake agreed to between federal, state and local officials last week.

The federal emergency brake dictates particular steps be taken automatically as soon as infection rates in a given district exceed infection benchmarks.

Most of the changes had to do with nighttime curfews, which are to go into effect as soon as the seven-day infection rate climbs above 100 in 100,000. Originally, the curfews were set to extend from 9:00 p.m. until 5 a.m. The new rules would see them begin one hour later, as well as providing a number of other relaxations, such as allowing individuals to walk or jog by themselves until midnight — something strictly forbidden in previous versions of the bill.

Changes were also agreed to end shopping via click-and-collect systems if infection rates exceed 150 per 100,000— something that had been prohibited in earlier iterations of the law. Infection rates of 165 or more would also end in-person schooling — previous versions of the bill had set that trigger at 200.

Germany's parliament, the Bundestag, is set to debate the measures on Wednesday. If legislation passes in the Bundestag it will then go to the Federal Council, or Bundesrat. If enacted, the rules would apply until June 30.

Federal Health Minister Jens Spahn encouraged state and local governments to be pro-active in fighting the coronavirus while the federal government gets its house in order, saying: "No one needs to wait for the law. It is after all an emergency brake. Ideally, the braking will have begun before we have to use it."