German Chancellor Angela Merkel has urged federal states to do more to curb infections during a televised interview. She also suggested additional measures such as curfews to better combat the virus. 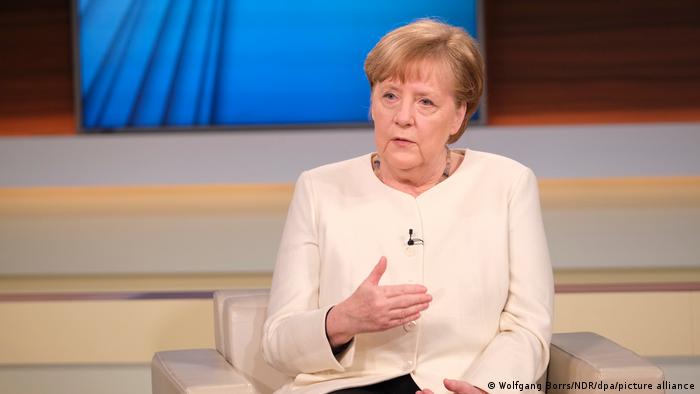 Merkel during Sunday's televised interview on the Anne Will talk show

German Chancellor Angela Merkel urged federal states on Sunday during a televised interview to do more to curb coronavirus infections. Merkel said additional restrictions such as curfews are needed to prevent "exponential growth" of the virus.

States have an uneven approach to combating virus, Merkel says

"We have to break this third wave," Merkel said on public broadcaster ARD's Anne Will talkshow, referring to rising coronavirus cases across the country. "We need action in the federal states. We need to take the appropriate measures very seriously. Some states are doing it, others are not yet doing it."

"We have our emergency brake... unfortunately it is not respected everywhere," Merkel continued. "I hope there might be some reflection on this."

The federal government and state premiers agreed to a strategy in early March where lockdown restrictions in certain regions would be introduced if coronavirus cases rose above 100 per 100,000 people in a seven-day period. This is known as the "emergency brake" mechanism.

Federal government will take action if states do not, chancellor warns

Under Germany's federal system, states are ultimately free to decide their own rules on dealing with the virus. The small southwestern state of Saarland, for example, has decided to end its lockdown measures after Easter and reopen sports and entertainment venues.

"If we are under the impression that we can reopen things — that is not the order of the day at the moment," Merkel said about states loosening restrictions.

If states do not take suitable actions in the "foreseeable future," Merkel warned the federal government could possibly amend the Infection Protection Act to implement nationwide restrictions.

"We are obliged by law to contain the spread, and at the moment, that's not happening," Merkel said.

"We need to do more, we have the possibilities of restrictions on going out, futher contact restrictions, further mask wearing," Merkel continued, saying a rigorous testing strategy is also necessary to control the virus.

Merkel said all Germans should be able to get vaccinated by the end of September. She said Germany would not get "any vaccine that is not produced in Europe."

COVID-19 Special: One year of coronavirus in Germany

Merkel: 'We have very similar developments all over Europe'