COVID: Germany's 3rd wave could be 'worse' than last 2

With cases rising again, Health Minister Jens Spahn has said Germany's health system could be pushed to its limits in April. Meanwhile, the head of the public health body warned that cases could reach 100,000 per day. 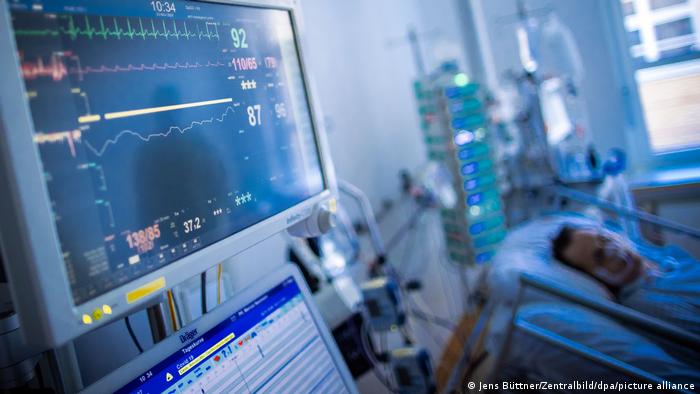 Germany is struggling to battle a third wave of infections

German health officials warned on Friday that the current increase in coronavirus cases is likely going to be "harder to curb" than the previous two, in large part because of the more virulent and more easily transmitted B117 variant.

The comments from Lothar Wieler, the head of Germany's Robert Koch Institute for infectious diseases (RKI), and Health Minister Jens Spahn come at the end of a turbulent week, as officials scramble to slow infection numbers.

There are "clear signs" that the third wave that Germany currently is in "could be even worse than the first two waves," said RKI president Wieler.

Speaking at a joint press conference with Health Minister Spahn, Wieler appealed for people to reduce their social contacts over the Easter holidays.

Although 10% of the German population has now received a first dose of the vaccine, the gains from vaccinations are being eaten away by the high infection rate, he said.

Spahn also cautioned that the current trajectory of infections could overwhelm Germany's hospitals in the next few weeks.

"At the moment, the figures are rising too fast and the variants are making the situation especially dangerous," he said. "If this continues unchecked, we run the risk of our health system could reach its breaking point in April."

Spahn also added that the COVID-19 test requirement for passengers has been postponed. Passengers will now be required starting on Tuesday to present a negative test when boarding flights to Germany from abroad. The measure was postponed in order to give airlines and individuals more time to prepare, Spahn said.

However, he acknowledged that the testing requirement for incoming travelers would not have a major impact on the infection rate. "I am under no illusions," he said. "This entry regulation alone is not the 'game changer' for the Easter period. The situation is too serious for that, and the infection rate in Germany is too strong."

Additionally, the president of the Robert Koch Institute, Lothar Wieler, warned that there could be as many as 100,000 new infections a day in Germany if sufficient prevention measures aren't taken. "Of course, it could be 100,000 per day," he said.

What's the pandemic situation in Germany?

The latest remarks from health officials come as cases in Germany continue to rise.

The incidence rate is one of the key measures for relaxing restrictions or imposing tougher curbs in the country.

What measures were decided this week?

The combination of rising numbers, a stuttering vaccine rollout, and anger at new proposed restrictions made for a tumultuous week for Angela Merkel's government.

On Wednesday, Merkel walked back plans announced barely 24 hours earlier to tighten the country's lockdown over the Easter holiday period from April 1 to April 5.

On Thursday, the Heath Ministry announced new measures for travelers. Starting next week, all those who arrive by plane from abroad must present a negative COVID-19 test result before boarding. Previously, only travelers from countries deemed high-risk were required to do so.

The government is also looking into whether it is legally possible to temporarily bar vacations abroad.

The move would represent another reversal from the measures agreed on Monday if it comes about. Merkel and the country's 16 state leaders kept domestic vacation curbs in place (German hotels can only serve business travelers at present), but allowed for trips abroad to popular destinations like the Spanish island of Mallorca.

Additionally, Germany on Friday approved a massive €750-billion ($885-billion) EU coronavirus recovery fund, breaking a taboo against debt pooling in the bloc. The fund is part of a €1.8-trillion budget up to 2027, agreed by the EU's 27 members in December.

"The vote is a clear signal for European solidarity and strength," said Finance Minister Olaf Scholz, stressing that it was in Germany's interest that the entire bloc emerged strong from the crisis. "A powerful recovery in Europe is an important prerequisite for Germany's own economic success and prosperity," he said.