The German chancellor has addressed the German parliament after rejecting calls for a vote of no-confidence and undoing plans for extra Easter restrictions. 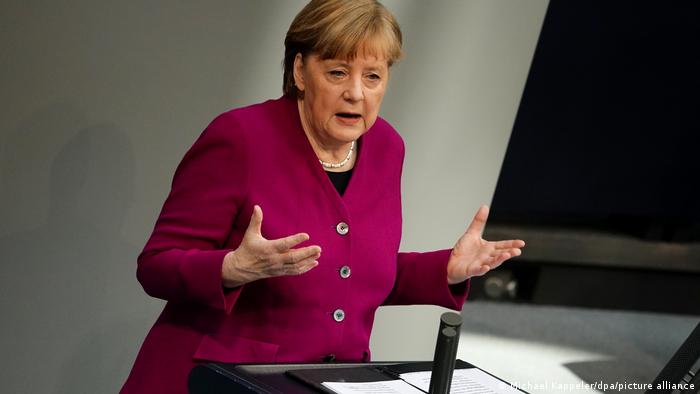 Angela Merkel, who will not be seeking a fifth term in this year's elections, took personal responsibility for the criticized Easter lockdown plan

German Chancellor Angela Merkel addressed the Bundestag on Thursday, a day after rejecting demands for a vote of no-confidence in her government.

Lawmakers from the liberal Free Democratic Party (FDP) had called for the vote after the government's chaotic handling of the proposed Easter circuit-breaker lockdown. On Wednesday, Merkel reversed the Easter lockdown and said she was personally responsible for the mistaken plan.

The Social Democrats (SPD) — junior coalition partners to Merkel's CDU/CSU Christian Democrat alliance — threw their weight behind the Chancellor, also rejecting the possibility of a vote of no-confidence.

What did Chancellor Merkel say?

Merkel first pointed out that cases were rising across Europe, often more sharply than in Germany.

"I encourage you to look at our neighbors," she told the lawmakers.

She also defended the joint procurement that the EU followed to ensure a balanced delivery of vaccines to the various members of the bloc. Anything else would have shaken the EU to its core.

The chancellor highlighted the importance of the EU's vaccine task force to increase the procurement of doses in the bloc while the UK is producing for itself and the US is not exporting vaccines.

Due to the mutations, the need for adjustments to contain the virus would likely "go far beyond just this year," Merkel said.

"We're now living in a new pandemic," she said, an allusion to the B117 mutation.

However, she said the government had new tools at its disposal, including the option of region-specific measures depending on case numbers as well as increased testing capacities.

She said that the whole of Germany could follow the example of regions, such as the southern city of Tübingen, which have been successful in carrying out large-scale testing.

Merkel called tests the necessary bridge until enough people have been vaccinated. "Of course, vaccination is the way out of the crisis," she said.

"You cannot achieve anything when you only see the negative," she said, in response to the criticisms of her government, and to jeers from certain lawmakers.

How did other parties react?

The parliamentary leader of the far-right Alternative for Germany (AfD) called on the government to prioritize vaccines, calling it the "same self-explanatory way anyone thinks of their families first," rather than "vaccine nationalism."

"When it comes to vaccinating, Joe Biden immediately stuck by Donald Trump's motto of 'America First.' And that is quite right, ladies and gentlemen," Alexander Gauland said.

SPD parliamentary leader Rolf Mützenich agreed with Merkel that testing must play a big role in curbing infections until more people have been vaccinated. However, he added that he would like to see companies obliged to test workers now, something the SPD has already called for.

He also showed his respect for the chancellor for having accepted the responsibility for the failed Easter lockdown plan that other people were also responsible for.

The SPD lawmaker went on to call on opposition parties to take more responsibility rather than just pointing fingers.

The State Premier of Saarland — and member of the CDU — Tobias Hans, gave an example of Germany's regional approach on Thursday. The small state bordering France and Luxembourg will come out of lockdown after Easter, allowing cinemas, theaters and outdoor dining to open once again, Hans announced.

What was the Easter lockdown plan?

Germany is struggling to contain a third wave of infections which is being largely driven by the more contagious B117 COVID-19 variant. The Robert Koch Institute for infectious diseases (RKI) reported over 22,000 new infections on Thursday.

The circuit-breaker lockdown plan came about after an extended meeting between the Chancellor and the heads of Germany's 16 states on Tuesday.

The leaders planned to pull the emergency brake on easing lockdown restrictions as well as implementing a five-day stricter lockdown over Easter which would have seen grocery stores closed for all but one of the days.

The idea had been to slow growth of infections, but it was slammed both epidemiologists as unlikely to change very much and by business leaders as costly and unfair.

The chancellor said that on reflection, the disruption the plan was set to cause looked set to outweigh any possible benefits.

Merkel's Christian Democrat alliance has been slumping sharply in the polls recently, ahead of September's general election. Dissatisfaction with the vaccination rollout and continued COVID restrictions, plus a series of graft scandals, have taken a toll on the CDU and the CSU in Bavaria.

With additional reporting from Jens Thurau.