The country will enter an even stricter lockdown from April 1 to April 5 over the Easter holiday period, when shops, including grocery stores, will largely have to close.

Tuesday's announcement marks a reversal from earlier this month when state leaders agreed to begin a cautious reopening process.

Talks between leaders of Germany's 16 federal states and Merkel lasted until the early hours of the morning following a lengthy interruption.

As well as prolonging existing measures such as the closure of cultural, leisure and sporting facilities, tougher restrictions will apply over the Easter period.

This "emergency brake" will halt further reopenings and will apply to areas exceeding 100 new cases per 100,000 inhabitants over a seven-day period.

If an area has an incidence rate of over 100 for three consecutive days, harsher lockdown measures will once again apply.

"We are in a very, very serious situation" due to the spread of coronavirus variants in the country, Merkel told the press conference.

"It really makes you a bit wistful about what we could have already achieved," Merkel said, adding that the mutated virus has now "basically eaten up" earlier gains.

Germany would have to be "prudent and flexible" and was in a "race against time" to vaccinate its population, she said.

Patrick Sensburg, a member of the German parliament from Merkel's governing CDU party, told DW that it was a tough decision for politicians to extend Germany's lockdown until April 18.

"We are quite close to the Easter holidays, and a lot of people wanted to go on holidays. So for political leaders, it was quite hard to tell people 'no,'" Sensburg said.

"This was not an easy decision, but in the end, the numbers are too high in Germany," he said. 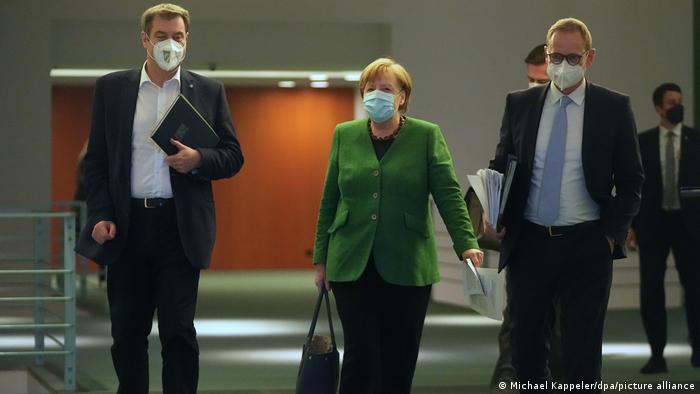 "We are having a de facto Easter lockdown," Bavarian State Premier Markus Söder told reporters. The goal is to take the speed out of the virus, he said.

"We are probably now living in the most dangerous phase of the pandemic," Söder added, saying that many people underestimate the situation.

He cautioned that impatience should not become Germany's weakness.

Governing Mayor of Berlin Michael Müller said it was important to win time until the vaccine becomes available.

Stephan Weil, Lower Saxony's state premier, backed the measures as he spoke of "five days of hard lockdown over Easter."

"Firms should not produce anything, traveling to work should only take place when it is absolutely necessary. Public life in Germany and human interactions should be reduced to the absolute minimum. A short but consequent phase of stillstand can break and dampen the infection wave," Weil said.

'Doubt' over length of Easter shutdown

For some experts, the lockdown measures agreed might not be enough to put a dent in the rising COVID cases across Germany.

"I doubt it a little bit," Tobias Kurth, the director of the Institute of Public Health and Epidemiology at Berlin's Charité Hospital, told DW.

He noted that the government's plan to curb shop openings and discourage social contacts over the Easter holidays isn't that much different than what would have normally taken place over those five days.

He urged for a stronger rapid testing regimen to be in place before officials consider relaxing restrictions again.

"I think a strict lockdown would work, but we opened up … without a clear concept of rapid testing or not having enough rapid testing available," Kurth said.

Professor Andrew Ullmann, spokesman for the German parliament's health committee, told DW he believes that a full lockdown, such as that enforced in early 2020 during the first wave "won't work" due to general lockdown fatigue in the population.

"What I'm really concerned about is that we are running from one lockdown to the next lockdown with any with no perspective for our population," added Ullman, who is also a trained physician and lawmaker for Germany's pro-business Free Democratic Party.

According to Germany's Robert Koch Institute for infectious diseases (RKI), the seven-day incidence rate stood at 107 on Monday, above the 100 threshold at which hospitals often become overwhelmed.