The Thai government has been struggling to contain a new, more potent coronavirus outbreak that has seen cases in the country nearly quadruple and deaths increase six-fold since early April. 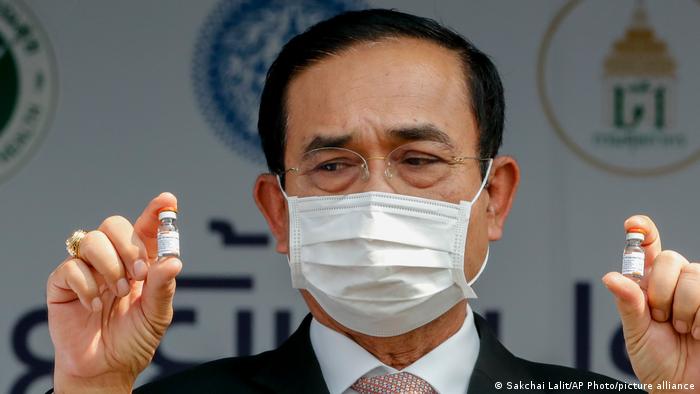 The government of Thai Prime Minister Prayuth Chan-o-cha has come under sharp criticism for its handling of the ongoing third COVID wave in the country.

The Southeast Asian nation has been struggling to contain a new, more potent COVID-19 outbreak that has seen cases nearly quadruple and fatalities increase six-fold since early April.

On Tuesday, the country reported a daily record of 35 new coronavirus deaths after logging 9,635 infections one day earlier — the highest daily number since the beginning of the pandemic.

The capital Bangkok has emerged as the infection epicenter and over two-thirds of the cases are in prisons.

Nearly half of 24,000 inmates tested at eight prisons — mainly in Bangkok and its suburbs, including several where prominent democracy activists have been detained — were found to have the virus.

Until last month, the kingdom had kept coronavirus infections low, through stringent restrictions on people entering the country and swift action to isolate confirmed cases.

But now it is struggling to contain the virus spread.

The high infection rates in prisons came to light recently when an activist at the forefront of Thailand's democracy movement announced she had tested positive five days after being released from a Bangkok jail on bail.

Thanathorn Juangroongruangkit, an opposition politician and former prime ministerial candidate, told DW that the government should have been aware that the situation would come to this point.

"If they had taken this into account, they would have been prepared months ago," he added.

Overreliance on one vaccine?

The new virus surge is the latest setback for the government, which has come under fire for its vaccine policy.

The Thai government had initially aimed to vaccinate 70% of the population by the end of the year but has been criticized for being slow to procure vaccines and for a strategy that had relied overwhelmingly on one manufacturer, AstraZeneca.

Thailand is scheduled to start its mass inoculation program next month, when locally manufactured AstraZeneca doses are available.

Just over 1.5 million of Thailand's more than 66 million people have received at least one dose of a COVID-19 vaccine, mostly that of Sinovac Biotech. Those include medical workers or people with pre-existing health conditions.

Thailand has also placed orders for the vaccine developed by Pfizer and BioNTech. Authorities have so far approved the vaccines of Sinovac, AstraZeneca, Johnson & Johnson and Moderna.

Anutin Charnvirakul, the deputy prime minister and health minister, wrote on his Facebook page on May 7 that "around 10-20 million Pfizer doses are expected to arrive in the third or fourth quarter this year."

In response to his post, a user wrote: "What were you doing last year? Why wasn't this planned? We have to wait until the fourth quarter? I can only pray that I won't die before then."

Another user responded to the minister's post by writing: "If you had a proper plan since the first or second wave, we would have received the vaccines by now. You just contacted them during the third wave, and we won't get the vaccines until the third or fourth quarter. Are you waiting for the fourth or fifth wave to arrive?"

Thanathorn shares these frustrations at the government's vaccine strategy.

"When the vaccine strategy was formulated in the third quarter of last year, the number of new daily infections was really low so the government underestimated the situation and thought they could control the spread of the coronavirus," said Thanathorn.

"They didn't think that the timing, sources and availability of the vaccine are crucial. That's why back then they struck a deal with only one company, AstraZeneca, to supply the Thai government with a huge amount of vaccines," added the former PM candidate, who has been accused of insulting the king after warning the government of its overreliance on AstraZeneca.

The Thai government plans to have 70% of the nation's people vaccinated by the end of this year. But just 2.3 million doses have been administered so far, accounting for only about 2% of the population, according to data compiled by the University of Oxford.

At the moment, Thailand's inoculation drive lags behind that of most countries in Southeast Asia.

But limited supply is not the only issue as demand is also falling short of expectations.

Sixteen million people over 60 or with pre-existing conditions will get top priority for the vaccines the government wants to administer free of cost. But as of Thursday, only around 7.4 million people have booked their vaccine appointments since registration began on May 1.

"Trust is earned. You cannot build it overnight so when the government says people should go and get themselves vaccinated, people tend to be hesitant because they are not sure of the side effects and the efficacy of the vaccine," he added.