Thailand: Third COVID wave threatens plans to reopen tourism | Asia | An in-depth look at news from across the continent | DW | 19.04.2021

A new surge in coronavirus infections and a sluggish vaccine rollout could postpone plans to resume Thailand's foreign tourism sector. People working in the travel industry are struggling to make ends meet. 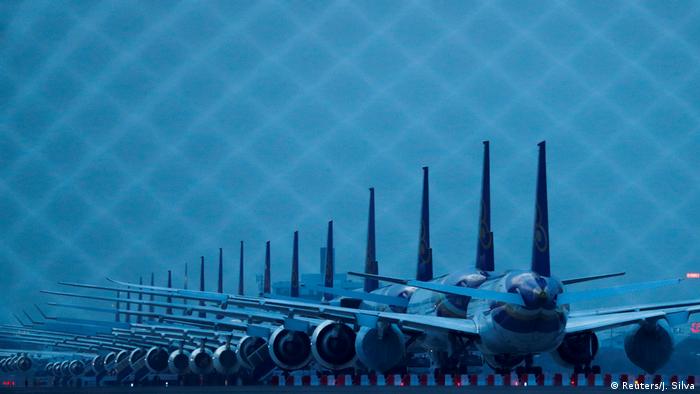 Varistha's life was turned upside down by the coronavirus. The flight attendant-turned-pilot, who asked for her real name not to be used, graduated from a rigorous — and expensive — year-long training course shortly before the pandemic hit.

In pre-COVID days, the 30-year-old thought that paying over 2 million baht (€53,500, $64,000) to a pilot training school after passing a recruitment test at a major Thai airline was a good investment and a nice transition from the cabin to the cockpit. Today, she looks back with some regret.

"My life hasn't gone as planned and I have struggled to land a job. Many companies cannot hire me as I'm still employed by the airline," Varistha told DW.

She is just one of many who have been put on leave without pay, but are allowed by their company to work somewhere else in the meantime. The problem is that most companies in Thailand don't allow dual employment.

After putting her life on hold for more than a year, Varistha was offered a severance package and a promise that when international travel resumes and the airline starts hiring again, she'd be among those given priority.

"Now I have to start my career over, but I still hope things will just go back to normal quickly so my life as a pilot can resume," Varistha said.

But the pandemic is far from over. Although Thailand has been relatively unscathed by COVID-19, it is now struggling to cope with a third wave of infections — the most serious since the pandemic began — and the emergence of the highly contagious B117 variant, after a largely successful containment effort in 2020.

On Sunday, Thailand reported a record 1,767 new cases, following the celebration of the traditional Thai New Year or Songkran festival.

The new cases marked the sixth record daily infection tally last week. The current outbreak has also spread from the capital Bangkok to all of Thailand's 77 provinces, according to the Ministry of Public Health.

The upsurge in cases in entertainment venues in and around Bangkok is threatening to jeopardize the government's recently announced plans to gradually reopen the country to foreign visitors in a bid to kickstart tourism. The tourism industry is one of Thailand's staple economic sectors and has been severely battered by the pandemic.

Officials have proposed shortening the quarantine period from the current mandatory two weeks, down to 10 days, while travelers who have been vaccinated would only need to be quarantined for seven days in an attempt to get the industry back up and running.

For those working in tourism-dependent jobs, the third wave means even more months without an income and using more money set aside for retirement.

"I have not earned a single baht since the start of the pandemic, but since I don't have a family of my own, it's been quite manageable," Penluck, a 54-year-old tour guide of over three decades who asked to remain anonymous, told DW.

"I try to stay positive and invest in my body by staying healthy. My saving grace is knowing that I'll still be able to work when the country reopens, be it next year, or in two or three years," she said. However, if the plan to reopen next year is postponed, she'll really have to tighten her belt, she added.

The record number of cases and the slow pace of the vaccination campaign could undo the work that saw Thailand successfully limit local transmission of the virus and battle two waves of infections.

As of April 16, Thailand had administered 605,259 doses of the vaccine, according to the University of Oxford. That covers just 0.75% of its population.

Thailand only outperforms Laos, Brunei and Vietnam for the number of vaccine doses administered relative to the population, in Southeast Asia.

Kannika, a flight attendant with a major airline in Thailand who asked to use a pseudonym, is among the few who were fortunate enough to get the vaccine because she happens to live in a high-risk area.

"The Sinovac vaccine uses dead material from the virus. It doesn't have many side effects. My husband, who is a front-line health worker, said it's safe," Kannika told DW.

The Chinese-made Sinovac and British-Swedish AstraZeneca — which has been linked to cases of rare and potentially fatal blood clots — are the only vaccines currently available in the country.

Even as many Western countries halt their AstraZeneca rollouts over the threat of thrombosis, Thailand has said it will continue with its principle vaccine.

For Kannika and the millions of others who rely on foreign visitors to survive, the vaccines are the only realistic solution — however risky the jabs might be.

"I want to make sure that I'm ready to work as much as possible when travel resumes," Kannika said.