The US and 13 other countries have lamented the lack of access given to WHO experts during an investigation into the origins of the coronavirus. China has accused opponents of "politicizing the issue." 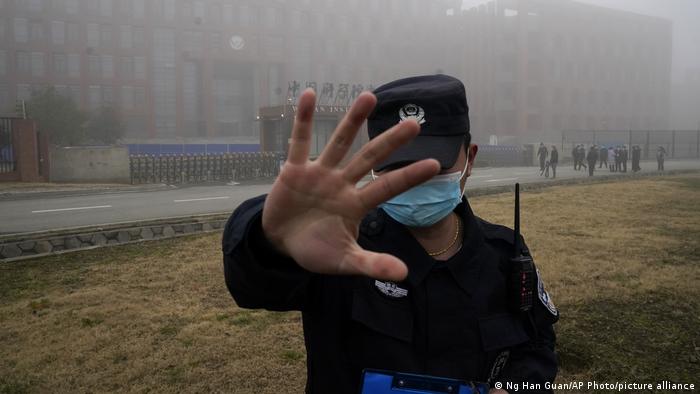 The United States has led a chorus of concern over a World Health Organization (WHO) report into the origins of the coronavirus.

A joint WHO-China study published on Tuesday said transmission of the virus from bats to humans through another animal is the most plausible explanation of the origins of the pandemic. The report added that a China-responsible laboratory leak is "extremely unlikely."

The US, however, was among 14 countries to express skepticism over the investigation, saying it lacked the data and samples required.

WHO: Impossible to draw conclusions

Even WHO chief Tedros Adhanom Ghebreyesus admitted that the experts found it difficult to get raw data and that the report did not gather sufficient evidence from which to garner concrete conclusions.

"I do not believe that this assessment was extensive enough," he told the UN health agency's 194 member states in a briefing on Tuesday.

"Further data and studies will be needed to reach more robust conclusions," he continued.

"Although the team has concluded that a laboratory leak is the least likely hypothesis, this requires further investigation, potentially with additional missions involving specialist experts, which I am ready to deploy."

The United States released a statement along with 13 of its allies, saying the inquiry had fallen short, amid accusations that Chinese officials failed to give proper access to investigators.

Nevertheless, neither Tedros nor the US-led statement mentioned China directly.

The US State Department said the 14 countries were calling for "momentum" for a second-phase look by experts and pointed to the need for further animal studies "to find the means of introduction into humans" of the coronavirus.

The countries expressed support for WHO's experts and staff, citing their "tireless" work. But the statement said the study had been "significantly delayed and lacked access to complete, original data and samples."

Critics have accused China of using delaying tactics and that Beijing took too long to grant permission for a WHO investigation.

Beijing, however, hit back at suggestions it was anything but helpful during the process, saying that it had demonstrated "openness, transparency and a responsible attitude."

"To politicize this issue will only severely hinder global cooperation in study of origins, jeopardize anti-pandemic cooperation, and cost more lives," the Chinese Foreign Ministry said in a statement.

The European Union called the report a "helpful first step" but highlighted "the need for further work."

The pandemic has killed nearly 2.8 million people worldwide since it first emerged in Wuhan in December 2019, with several countries now battling new waves of infection.

The pandemic has stalled efforts to reach global gender equality, a report from the World Economic Forum has revealed. At the current rate, it will take 133 years to achieve equality between men and women worldwide.

The three leaders talked about issues of global security as well as the possibility of authorizing and producing the Russian-developed Sputnik V coronavirus vaccine in the EU.