Health experts have been dispatched to the central city of Wuhan after 27 people were struck down by viral pneumonia. A 2003 outbreak of the highly-contagious SARS virus was covered up and killed hundreds of people. 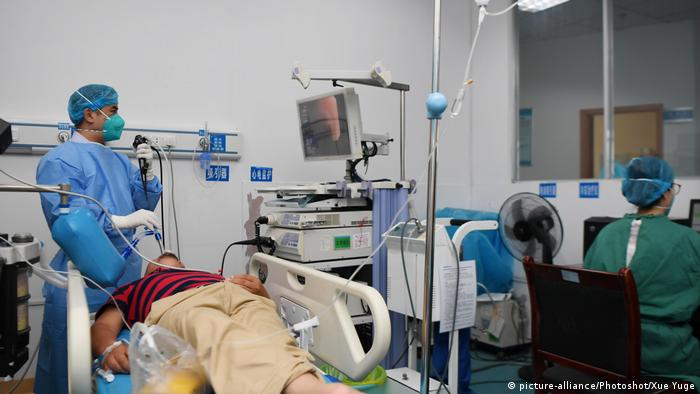 Chinese health authorities on Tuesday said they are investigating 27 cases of viral pneumonia in central Hubei province, amid online speculation that it could be linked to the SARS flu-like virus that killed hundreds of people a decade ago.

A team of senior health experts were dispatched to the city of Wuhan and were reported by state broadcaster CCTV to be "conducting relevant inspection and verification work."

Of the 27 reported cases, seven are in a critical condition and 18 are stable, the Wuhan Municipal Health Commission said on Tuesday on its Weibo social media account.

The condition of two other patients had improved to the point where they would be discharged soon, it said.

The emergency notification urged hospitals to offer treatment and report cases in a "timely manner."

The commission added that an investigation and cleanup were underway at a seafood market in the city, which is suspected to be connected with the cases.

Initial laboratory tests showed that the cases were viral pneumonia. No obvious human-to-human transmission had been found and no medical staff had been infected, the commission said.

News of the pneumonia outbreak led to speculation online that it might be linked to Severe Acute Respiratory Syndrome (SARS), a highly contagious respiratory disease.

But the official People's Daily newspaper said on Weibo: "the cause of the disease is not clear."

"We cannot confirm it is what's being spread online, that it is SARS virus. Other severe pneumonia is more likely," it said, citing hospital officials.

In late 2002, officials covered up a SARS outbreak in southern China for weeks before a growing death toll and rumors forced the government to reveal the epidemic, apologize and vow full candor in future outbreaks.

In mainland China, 349 people were killed, along with another 299 in Hong Kong. The disease spread rapidly to other cities and countries in 2003. More than 8,000 people were infected and 775 died.

SARS was brought under control through quarantines and other extreme measures, but not before causing a virtual shutdown to travel in China and the region and taking a severe toll on the economy.

Chinese President Xi Jinping has called a scandal over inferior vaccines "vile" and "shocking." Many in China are scared and angry over lax regulations. (23.07.2018)