The Dutch government plans to ease restrictions, and allow cafes to reopen from 12 to 6 p.m. with up to 50 people. The country is ramping up its vaccination rollout, as cases continue to rise. Follow DW for the latest. 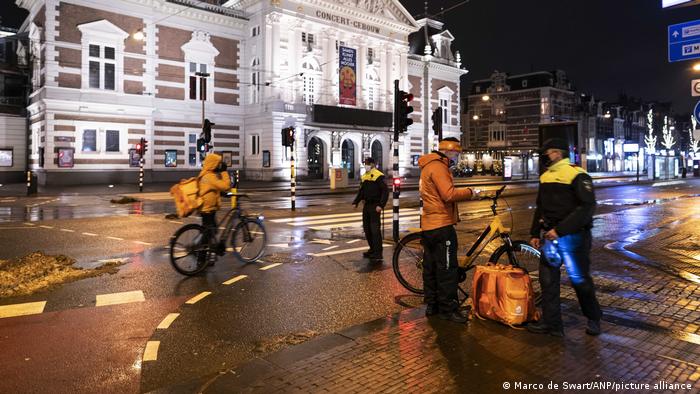 The Netherlands has announced plans to end a controversial nighttime curfew and allow cafes to serve customers outdoors as part of an easing of coronavirus restrictions, even as cases continued to rise.

"We are of course glad that this is possible again because society yearns for more freedom," said Prime Minister Mark Rutte.

Rutte said the changes, which will apply from next Wednesday, were a "step that is very careful and cautious."

The nighttime curfew had led to the country's worst riots in decades. After first opting for a more relaxed lockdown, Dutch authorities brought in stricter rules in October when the number of cases soared. Infection rates there are still rising, as the country seeks to speed up its vaccination rollout.

Here's a roundup of the latest coronavirus news from elsewhere in Europe and the rest of the world:

Denmark has announced plans to give 55,000 doses of the AstraZeneca vaccine to the neighboring German state of Schleswig-Holstein, after dropping the jab from its vaccination drive.

"Following a request from the [premier] of Schleswig-Holstein, the government has decided to put 55,000 doses of the AstraZeneca vaccine at the disposal of the border regions. The vaccine doses will be returned upon an agreed timeframe," the Danish Foreign Ministry said in a statement.

Denmark suspended the use of the AstraZeneca jab after reports of blood clotting, and is continuing its inoculation drive with the BioNTech-Pfizer and Moderna vaccines instead. The government has said it may reintroduce the AstraZeneca vaccine at a later date, "if the situation changes."

The Johnson & Johnson coronavirus has been deemed "safe" by Italian health authorities, who said they would prioritize its use for people above 60.

The European Medicines Agency (EMA) said on Tuesday that blood clots should be listed as a "very rare" side effect of the vaccine. Health authorities in Italy said it was definitely safe, and "should be preferentially administered to people over 60 years old."

The same guidelines were issued for the AstraZeneca jab.

The number of confirmed coronavirus cases in Germany rose by 24,884 to 3,188,192 on Wednesday, according to data from the Robert Koch Institute for infectious diseases. The death toll rose by 331, bringing the tally to 80,634.

"It doesn't hurt, and what is more, it protects us all," he said, urging Mexicans over the age of 60 to get their doses. Obrador had earlier said he would hold off on getting the jab as he still had antibodies after getting infected in January. He later changed his mind after consulting with his doctors.

The 67-year-old has been eligible for a shot since the first week of April. While he sought to set an example by getting the jab, the president has refused to wear face masks and has not made them mandatory in public, saying it infringes on individual freedom.

Argentina is set to become the first Latin American nation to produce Russia's Sputnik V vaccine. Russia's RDIF sovereign fund has entered into a deal with Argentina's Richmond pharmaceutical company, and full scale production is expected to start in June this year.

Richmond has already produced a first batch of 21,000 doses, which will be sent for quality control to Russia's Gamaleya Research Institute. "It will be a great opportunity to advance in the fight against the pandemic not only in Argentina, but also in Latin America," said Argentinian President Alberto Fernandez.

Canadian Prime Minister Justin Trudeau has announced plans to make it mandatory for international air travelers to quarantine at their own expense at a hotel when they enter the country. He also thanked the country's two major airlines for a voluntary suspension of flights to Mexico and all Caribbean destinations until May.

Trudeau has reiterated that travel right now is not advisable, as the country sees a third wave of infections. He said testing and quarantine measures are crucial to reduce the number of infections.

Brazil says it is in talks to buy another 100 million doses of the BioNTech-Pfizer vaccine. After a slow start to the inoculation program, the country has been scrambling to acquire more doses of the vaccine.

The first delivery of the order is due to arrive next week. The Health Ministry said that a total of 15.5 million doses are due to arrive between April and June.

India reported over 295,000 coronavirus infections in a single day, setting a new daily record. The daily death toll also topped 2,000 for the first time since the pandemic started. COVID-19 has claimed at least 182,553 lives so far in India. The Asian country of nearly 1.4 billion people has so far recorded 15,6 million infections, second to only the US.

Many blame Indian politicians for the ongoing virus surge, after both Prime Minister Narendra Modi and his rivals held mass election rallies with little regard for anti-pandemic measures.