After three consecutive nights of violent riots over COVID lockdown restrictions, the situation remains tense in the Netherlands. Police have beefed up their presence to prevent another night of unrest. 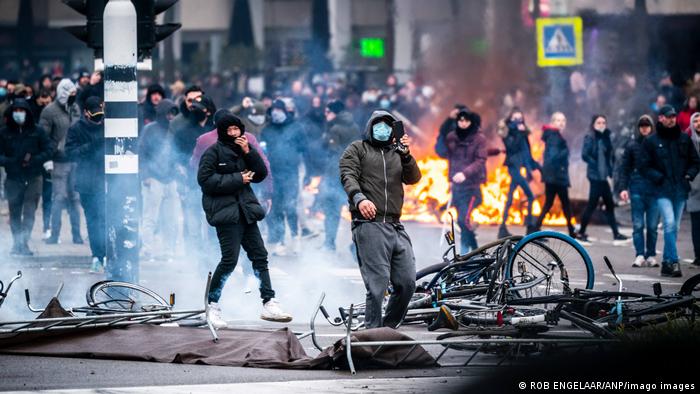 The situation across the Netherlands remained tense but without major unrest on Tuesday night after three nights of violence in protest against the government's implementation of tough restrictions to curb the spread of the coronavirus.

Police took to the streets of towns and cities across the country to prevent violent rioting, while businesses closed early and shops boarded up.

On Tuesday when the 9 p.m. curfew went into effect, rowdy crowds of youths gathered in Amsterdam and Hilversum, but were broken up without incident. In Rotterdam, 33 people were detained for violating social distancing regulations and vandalism.

That was in stark contrast to Monday night, when rioting rocked cities across the country and more than 180 people were arrested for burning vehicles, stone-throwing and widespread looting.

"This was truly a different picture to yesterday," National Police chief Willem Woelders told Dutch public television. "We did not need to use the riot police or other forces."

But he cautioned that one night of comparative quiet did not mean they could let down their guard. "We have to remain alert," Woelders said.

'They won't get away with it'

The rioting, which started with the torching of a coronavirus testing center in a fishing village on Saturday night, is the worst to hit the Netherlands in years.

It was initially triggered by anger over a tough coronavirus lockdown that has been in force since mid-December but degenerated into vandalism by crowds whipped up by messages swirling on social media.

The violence has stretched the police and led at times to the deployment of military police. On Monday night, rioters pelted police with rocks, fireworks and Molotov cocktails and looted shops in at least two cities, Rotterdam and Den Bosch.

Justice Minister Ferd Grapperhaus said earlier on Tuesday that rioters would quickly be brought before the courts and face possible prison terms if convicted. "They won't get away with it," he told reporters in The Hague. 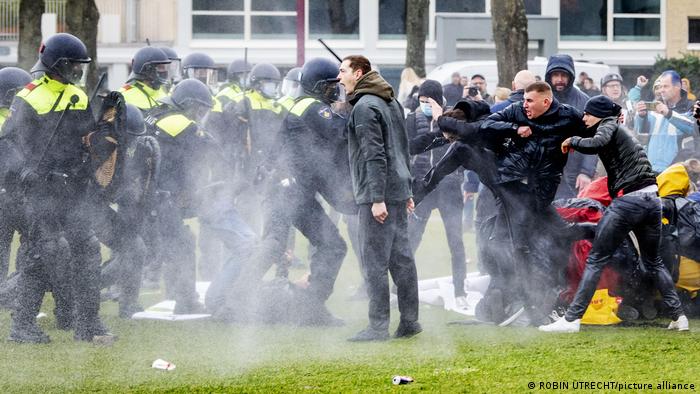 Rotterdam Mayor Ahmed Aboutaleb posted a video message on Twitter, asking rioters: "Does it feel good to wake up with a bag full of stolen stuff next to you?" He also appealed to parents of the young rioters, asking: "Did you miss your son yesterday? Did you ask yourself where he was?"

"This criminal violence must stop," Prime Minister Mark Rutte tweeted. "The riots have nothing to do with protesting or struggling for freedom," he added. "We must win the battle against the virus together, because that's the only way of getting back our freedom."

Coronavirus infections have been falling in recent weeks, with the number of new cases down by 8% over the past week. A little under 4,000 new infections were reported on Tuesday in the Netherlands, the smallest daily increase since November 24.

But the RIVM said the situation was still very serious as a result of the more contagious variant that has caused a massive surge in cases in Britain.