Germany has recorded 23,648 positive coronavirus tests over the past 24 hours, while the death toll rose by 260. Despite a downward trend, India has crossed the 9 million case mark. Follow DW for more. 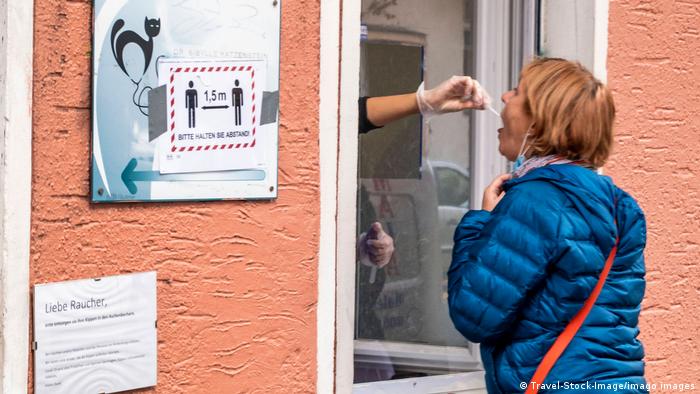 The number of people testing positive for coronavirus in Germany has hit a new daily high with 23,648 new infections reported on Friday.

The Robert Koch Institute (RKI) for disease control said the figure was slightly higher than the 23,542 recorded exactly a week ago.

RKI has counted a total of 879,564 cases since the virus arrived in Germany in February. The country's overall death toll hit 13,630 on Friday, due to 260 new deaths in the previous 24 hours.

Just as the German government mulls stronger curbs to tackle the second wave of the pandemic, RKI said the 7-day R rate, the rate at which an infected person transmits the virus to others, stood at 0.99. Any reading above 1.00 means that the overall caseload has been trending upwards over the previous week, rather than downwards.

Individuals infected with the virus are unlikely to catch it again for at least another six months, according to an Oxford study.

"We can be confident that, at least in the short term, most people who get Covid-19 won't get it again," said Oxford University Professor David Eyre, one of the authors of the study. However, the authors said they had not yet gathered enough data to make a judgment on reinfection after six months.

The study drew on data from regular testing of 12,180 healthcare workers over a period of 30 weeks. It found that none of the 1,246 staff with coronavirus antibodies developed a symptomatic infection.

The number of coronavirus cases in India has crossed the 9-million mark, with the capital New Delhi continuing to report rising daily cases despite a downward trend nationwide.

The country recorded 45,882 new cases and 584 new fatalities on Friday, bringing the total death toll to 132,162, the world's third-highest in gross terms after the US and Brazil.

Authorities in Delhi have begun a house-to-house survey to detect COVID-19 cases and jacked up the fine for not wearing a mask in an effort to contain the renewed surge.

Arrangements are being made for an additional 1,400 intensive care unit beds as hospitals report shortages.

China is to hold rare talks with Japan and South Korea next week, with the need to respond to the coronavirus being given some credit for a thaw in frosty relations.

China's foreign minister Wang Yi will visit Tokyo on Tuesday and Wednesday to discuss ways of boosting the regional response to the pandemic.

The two countries are expected to agree to ease tourism restrictions and to create a business track program that will allow visitors from either side to engage in limited business activity during their 14-quarantine period.

Prior to the pandemic, Chinese visitors made up a larger chunk of Japanese tourism than nationals of any other country.

Wang will also visit Seoul next week. As well as the pandemic, tensions with North Korea will top the agenda.

In Serbia, the head of the Orthodox Church has died after contracting coronavirus, the country's president, Aleksander Vucic, said on Friday.

Patriarch Irinej was admitted to hospital in Belgrade on November 4th. He tested positive after attending the funeral of another senior cleric.

Read more: Why is Finland coping so well with the coronavirus crisis?

Spain is "ready" to vaccinate "a very substantial part" of its population by the middle of 2021, according to Prime Minister Pedro Sanchez.

He said the government had put together "a comprehensive vaccination plan" that would be presented at Tuesday's cabinet meeting, making Spain and Germany the only countries within the European Union to fully map out such an immunization scheme.

Spain has been one of the hardest-hit countries in the world, with more than 1.5 million infections and a death toll of over 42,000.

Asix-day "circuit-breaker" lockdown in South Australia will be cut short, officials said Friday, blaming a pizza shop worker who misled contact tracers about how he contracted the virus.

Premier Steven Marshall said a man had claimed to have contracted the virus after a brief visit to a pizza parlor hotspot, leaving authorities concerned the strain was much more contagious than originally believed.

But further investigation revealed he in fact worked part-time at the restaurant and had picked it up from a colleague.

Red-faced authorities stressed the costly lockdown, including the closure of schools, shops, pubs, factories and even takeaway restaurants, had still been necessary.

The state's nearly 2 million population will now come out of lockdown late on Saturday. As of Friday, people were immediately permitted to exercise outdoors and walk their dogs again, activities that had also been restricted.

US President-elect Joe Biden has vowed not to shut down the country despite soaring coronavirus cases, pushing instead for a national order on wearing masks. He also took a shot at Trump's "incredible irresponsibility."