US President-elect Joe Biden has vowed not to shut down the country despite soaring coronavirus cases, pushing instead for a national order on wearing masks. He also took a shot at Trump's "incredible irresponsibility." 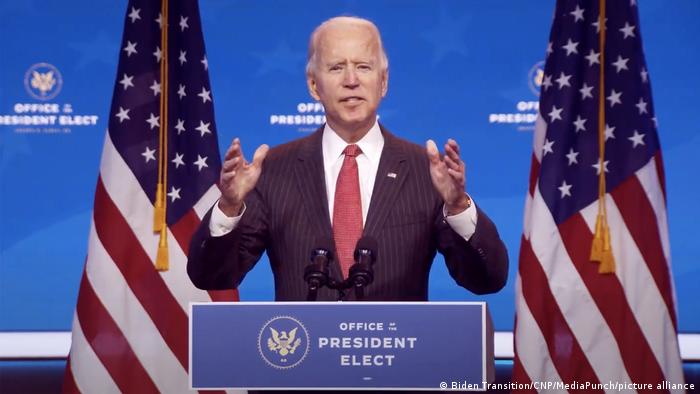 The US would not enter a new "national shutdown" under the Biden administration, US President-elect Joe Biden said after a joint call with 10 US state governors on Thursday.

Biden discussed his plan to curb coronavirus infections with the governors, which included five from his own Democratic Party and five Republicans. The US has already lost over a quarter of a million lives to the virus.

He backed up his refusal to shut down the country explaining that "every region, every area, every community can be different" and that a single national lockdown would be "counterproductive."

The US is entering a 'dark winter'

"The country is still in the crisis, and there is a dark winter still ahead," Biden told reporters while presenting the main points of his coronavirus action plan to the public.

The six-point plan would include economic relief to states — also relating to access to affordable healthcare and unemployment benefits, as well access to vaccines, funding for the National Guard, a national order on wearing masks, easier access to testing, as well as a rebuilding effort after the pandemic itself is over.

Biden said he was impressed by the consensus which appeared among the governors, who agreed to pull together against COVID-19 regardless of their political affiliations.

"The bottom line: We can do this, there is nothing beyond our capacity, but we have to come together as a country," Biden said. His running mate Kamala Harris, pledged that the new administration would provide governors with "the resources you need to save lives and get our economy back on track."

"When it comes to this pandemic, we are not Democrats or Republicans, we are Americans, we will be there for one another," she said.

Lack of cooperation from the Trump administration

Commenting on President Donald Trump's election challenges, Biden said Trump's behavior "sends a horrible message" about the US identity and the working of its democracy.

"It's hard to fathom how this man thinks," Biden said, condemning the Republican as the "most irresponsible president in American history."

The president-elect also lamented the lack of coordination from the outgoing administration which has left his transition team without "all the information we need to get from all the various agencies."

The refusal by the Trump administration to comply with the transition has hampered Biden's ability to form an actionable plan to deal with the coronavirus pandemic once he's in office.

Biden: 'It's important that there be coordination now'

Vice-President Mike Pence also gave a press conference on Thursday saying that the country "has never been more prepared to combat this virus than we are today."

Pence, who heads the White House pandemic task force, sought to talk up the measures taken by the current administration despite rapidly increasing cases.

He also vowed a speedy vaccine distribution, saying that as little as one day after a vaccine gets approval, "we'll be shipping vaccines to the American people and within a day after that, we'll be seeing those vaccines injected."

He made no reference to the President-elect Biden or to the transition of power.