China has vaccinated more than 70% of its population. Meanwhile, UNICEF has urged nations to reopen schools. Follow DW for the latest. 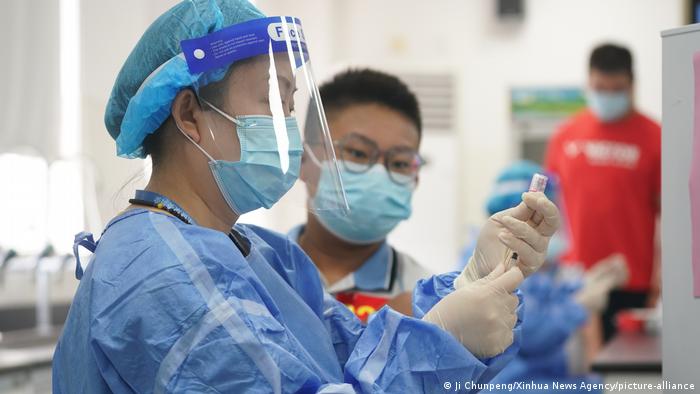 Chinese authorities said on Thursday that 71% of its population of 1.4 billion had received both shots of the coronavirus vaccine.

Officials said earlier this month that it was difficult to expand the country's vaccination program, but did not specify how or why.

UNICEF has urged education authorities to reopen schools as soon as possible in countries where millions are still not allowed to return to classrooms, 18 months into the pandemic.

Schools in some 17 countries are still fully closed, while those in 39 countries remain partially closed, according to a report released by UNICEF.

Here's the latest coronavirus news from around the world

Moeti said that only 3.6% of Africa's population has been fully immunized, and noted that export bans and vaccine hoarding by rich countries have resulted in "a chokehold'' on vaccine supplies to Africa.

"As long as wealthy countries lock COVAX and the African Union out of the market, Africa will miss its vaccination goals,'' Moeti said.

The US government is considering requiring vaccinations against COVID and contact tracing of international visitors, as the country revamps its current broad restrictions on many foreigners traveling to the US, a top White House adviser said Wednesday.

Airlines and other travel companies have pushed the administration to ease the restrictions, particularly on UK visitors.

Jeffrey Zients, the White House coronavirus response coordinator, said that current travel restrictions would remain in place until the administration rolls out a "new system'' for regulating international travel.

"We will also be putting in place contact tracing to enable CDC to follow up with inbound international travelers and those around them if someone has potentially been exposed to COVID-19,'' Zients said, "and we are exploring vaccination requirements for foreign nationals traveling to the United States.''

COVID-19: Indonesians keen to get vaccinated

China's vaccination push is part of a major ramp-up in vaccination across Asian nations, as supply shipments roll in and people overcome hesitancy in hopes of easing restrictions.

Japan and South Korea have both surpassed the US in terms of the proportion of the population who have received at least one dose.

Australia is also targeting high vaccination rates in its drive to escape lockdowns and bid to re-open borders. The nation has given 56% of people at least one shot, as infections continue to peak.

Covid-19 and the fourth wave: Pandemic for the unvaccinated?

President Emmanuel Macron's decision in mid-July to require a health pass to go anywhere from restaurants to gyms and museums, and make the jab mandatory for health workers, has helped increases vaccination take-up across the country.

Italy will become the first country in Europe to require all workers to have a COVID-19 "Green Pass," a paper certificate showing someone has received at least one vaccine dose, tested negative or recently recovered from the disease.

The cabinet is due to approve the measure on Thursday, officials said.

Dozens in Russian president Vladimir Putin's inner circle have been diagnosed with COVID-19, prompting him to self-isolate.

"Cases of the coronavirus were detected in my inner circle. Not just one or two but several dozen people," Putin said, speaking via video link at a meeting of a Moscow-led security alliance. "And now, I have to remain in self-isolation for a few days."

Putin has reported that he has had two shots of Russia's Sputnik V vaccine, and the Kremlin said that he was in good health.

British Prime Minister Boris Johnson has said the booster program for those over 50 years old and other priority groups will form a key plank of his plan to ride out the upcoming winter without further lockdowns.

Iran approved the COVID-19 vaccine developed by US firm Johnson & Johnson, a senior official said, as the Islamic Republic faces a fifth wave of infections.

The announcement comes eight months after Supreme Leader Ayatollah Ali Khamenei banned imports of vaccines made by the US and Britain.

President Ebrahim Raisi’s administration is under pressure to broaden its sources of vaccines as infections mount in the deadliest wave the country has experienced.
jcg/rc (dpa, Reuters, AFP, AP)