With France facing a fourth COVID wave, the government is making it harder for unvaccinated people to access certain public places. Over the weekend, protesters once again came out in force to show their opposition. 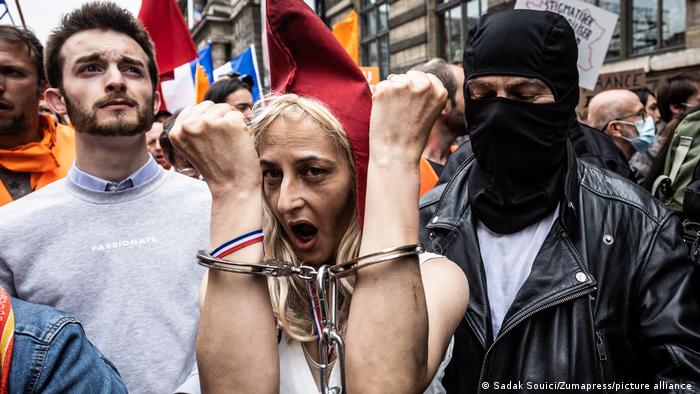 Business has been difficult for restaurateur Sylvain Belaud ever since the beginning of the COVID-19 pandemic, with turnover plummeting by 60% last year.

And now the director of the Cafe Francoeur in the Montmartre area in northern Paris will have to face what feels like yet another obstacle on the way back to business as usual.

A "health pass" will soon be required on trains, domestic flights and in long-distance buses, as well as in restaurants and cafes. The pass consists of a QR code on a smartphone or on a piece of paper, and shows that people have been fully vaccinated, hold a recent negative PCR test result or have recently recovered from a COVID-19 infection. 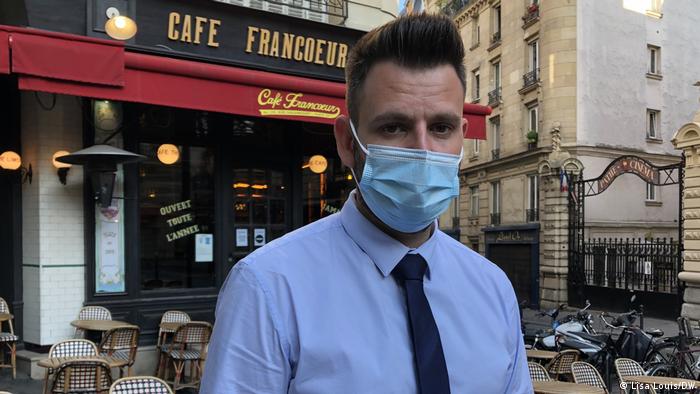 Sylvain Belaud supports vaccination, but he worries the new rules will hurt his business

The QR code is already mandatory at cultural venues and its use will be extended on August 9, provided France's highest court of appeal gives its go-ahead. The law will also make a COVID-19 vaccination compulsory for health care workers and those working with vulnerable people. In case of noncompliance, staff are to be suspended without pay.

French authorities are implementing the health pass in an attempt to boost vaccination rates and stem a fourth wave of COVID-19, fueled by the highly contagious delta variant. Daily infection rates have exploded in recent weeks, increasing from roughly 3,000 in early July to now over 20,000.

The government is aiming to reach collective immunity, which virologists believe can be reached with an immunization rate of 80% to 90% of the entire population.

Some clients 'won't come any more'

Restaurateur Belaud agrees people should get vaccinated — he himself is fully immunized and soon, so will be all of his 20 staff members. But he worries the new rules will hurt his business.

"Some of our clients told us that they wouldn't come any more," he told DW. "Not all of them will want to get vaccinated or get a test done every 48 hours. And our turnover is already 30% below what we usually see during the summer, as there are fewer tourists than in normal years."

The 32-year-old is all the more disenchanted as the measures are kicking in just two months after he was allowed to finally open his restaurant after months of lockdown. At the time, it felt like the long-awaited silver lining.

"We are delighted to be able to welcome customers back inside and not only on the terrace — this gives us an additional option when it's raining. And it's great that the curfew will be pushed back and eventually lifted," he said at the time.

Belaud isn't the only one who is disappointed. Tens of thousands of protesters have been taking to the streets over the past three weekends, ever since President Emmanuel Macron announced the new rules on July 12.

Most French in favor of the health pass

The demonstrators feel their personal freedom is in danger, with some talking about a segregated society. Among other things — like relaxing the vaccination requirement for health care workers — they have been demanding that the health pass be withdrawn.

But although the number of protesters has been going up every week, they don't seem to represent the majority of the French. Only between 35% and 40% of the population supports their demands, according to a recent survey by polling institute Ifop.

Another recent survey by institutes Ipsos and Sopra Steria on behalf of radio station Franceinfo shows that more than 60% of the French are in favor of the health pass, while 74% approve of compulsory vaccination for health care workers.

Speaking to French media in late July, President Macron rebuffed the protesters' calls for more freedom. "There is no such thing as freedom with nothing in return," he said.

Since Macron announced the new rules, the number of daily inoculations has been skyrocketing. It has now reached roughly 650,000 on a weekly average, compared to about 350,000 in early July, according to the website Doctolib.fr, which handles most of the vaccination appointments.

That number includes many young people who now seem eager to get their COVID shot. The share of 18- to 39-year-olds who have already received at least one dose — which has been possible since May — has risen from 48% on July 12 to roughly 64% today.

Government approach 'anything but gentle'

But that doesn't mean that all young people like how the government has handled things. Quite the contrary, said 30-year-old Thomas Grunberg.

"I think this decision was dramatic and a very bad idea," the event manager told DW while sitting on a bench along the Canal Saint-Martin in Paris on a recent Saturday afternoon.

"I'm immunized, but I don't think the jab should be compulsory. Some of my friends don't want to get vaccinated and that's why we'll continue to meet at home or somewhere outside." 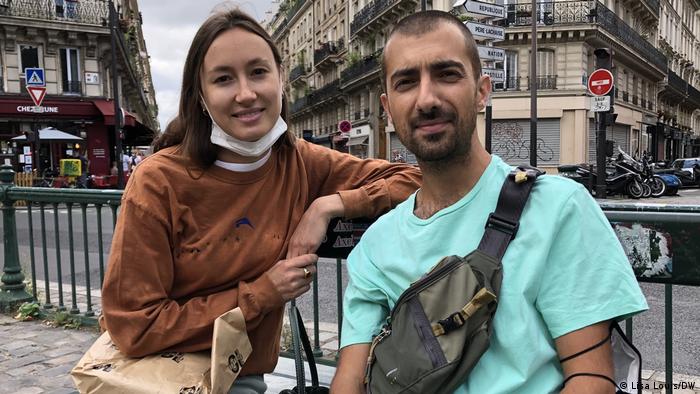 Thomas and Camille agree with some of the COVID measures, but don't like how they have been implemented

Sitting next to him was 29-year-old Camille de Saint Robert — also fully vaccinated.

"I do understand that measures need to be taken and we need to stand together," she said. "But I don't feel the government is being transparent, and their method is anything but gentle."

"Of course, the health pass was imposed on us, but they had to act quickly," he said. "The delta variant is gaining ground and vaccination can help fight it. The government didn't have a choice."

COVID: US urges vaccinated people to wear masks inside again

The US Centers for Disease Control and Prevention has said the spread of the delta variant means even fully vaccinated Americans should return to wearing face masks in public indoor spaces.

Ever since Germany launched its vaccination campaign, a debate has raged about rights and restrictions. Christoph Strack asks whether the state can impose curbs on those with full protection where it’s unnecessary.