Mandates in the US, France and elsewhere are requiring certain workers to get vaccinated against COVID-19. But many say they'd rather leave a job than get the jab. Can an economy in crisis handle the blow? 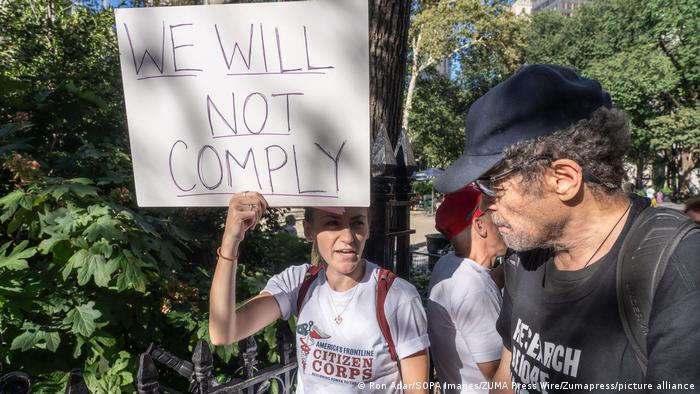 In a tight labor market, many workers might consider working elsewhere if their employer requires the coronavirus vaccine

A controversial new mandate in the US will require millions of workers to get vaccinated against COVID-19. The move by the world's largest economy raises questions about how much a tight labor market can sustain — and about who else might follow suit.

Many countries already require certain workers, like federal or health care employees, to be vaccinated. Starting today, millions of French frontline workers face termination should they remain unvaccinated. Germany's government, on the other hand, has been adamant that it won't require vaccinations, a shocking idea for many in a country where even the right for employers to know if their employees are vaccinated has received major pushback.

Up to 100 million Americans could be affected by the new mandate in the US, where just over half of the total population is fully vaccinated against COVID-19.

Vaccinations against other illnesses are a standard requirement in US public schools. Still, survey after survey has shown that as many as 50% of unvaccinated workers would consider walking away from a job should it require the COVID-19 jab, which people object to for a variety of reasons.

At the same time, a lot is pointing to another winter spent in the clutches of the virus. Stagnating vaccination rates, industry-disrupting outbreaks of the delta variant, and the prospect of spending more time indoors as the temperature drops are all factors playing a role in destabilizing the trajectory of an economic recovery that got going over the summer.

Hoping for a normal year at school

The illusion of choice

Requiring workers be vaccinated is meant to reduce some of that risk. But companies across many sectors are already dealing with staff shortages. Despite the chance of a breakout, employers aren't eager to let people go or see them walk off the job, particularly at a time when everyone is hiring.

Still, some experts think resistance would be negligible.

"The immediate harm of compulsory vaccination in the workplace would probably be rather small," Enzo Weber, researcher at Germany's Institute for Employment Research (IAB), told DW in an e-mail. "The vast majority of people are economically and socially dependent on gainful employment. There would probably not be mass absenteeism due to refusal to vaccinate."

"On average, the unvaccinated are the ones with lower incomes and more insecure jobs. Many of these people couldn't afford not to get vaccinated," he told DW.

Criticism of vaccine mandates has included the argument that it would disproportionately affect these lower-income workers. But would this be still true at a time when the job market is red-hot?

Requirements instituted on a company-wide level, as McDonald's, Goldman Sachs and Facebook have done for US employees coming in to work, could drive workers into the arms of competitors.

"If people who don't want to get vaccinated were to be required by their employer to be vaccinated, and would then instead all go to certain employers who don't require it, where they all catch the infection together, that would at least be better than if the infections were spread throughout society and become difficult to track," said Wagner, adding that this grim scenario is a purely hypothetical one in Germany's case.

Baerbock: 'Obligatory vaccination should be considered'

Working with the science of disease immunity could be an alternative tool governments and employers reach for in managing labor resistant to vaccination.

"If people don't want to get vaccinated, then maybe they can do something like a sabbatical," Patrick Puhani, director of the Institute of Labor Economics at Leibniz University Hannover, told DW. "So people don't lose their jobs permanently, but they just have to come back when they've recovered and developed immunity. And at some point they will be immune because at some point they are going to encounter this virus."

So how does the economic cost of accommodating unvaccinated workers compare with the risk that a vaccine requirement would push them out of work?

Part of the current labor shortage is because some people fear the workplace will expose them to COVID-19, which has killed over 4.5 million people around the globe. There is a similar concern among certain demographics of shoppers, diners and anyone who has reduced their public activities — and spending —  because of the pandemic. There is also the public health cost to consider.

"There is a cost in Germany if people get sick, because there's very, very generous sick pay," said Puhani. "Sick pay in the US is not that generous, so I'm a bit surprised that the US has this mandate."

Broadway is back after 18-month pandemic shutdown

Other governments and companies will certainly be monitoring their peers, curious to see how much political and literal capital is or is not spent after instituting vaccination requirements for workers. If worker mandates become commonplace, it could become more difficult for employees to find an attractive position that doesn't require vaccination. In the US, more and more new positions are already listing it as a requirement in the job description. Such a move is not without controversy.

"Excluding unvaccinated individuals from the workforce would effectively impose a vaccination requirement," Weber pointed out.

Importantly, the US mandate does allow employees to opt out of vaccination and submit to weekly testing instead. Some might find this routine too irritating and ultimately choose to get vaccinated. But those who truly object could abstain and still keep their job.

The true cost of a vaccination mandate is then perhaps less an economic one than it is political and social.

"The damage caused by social unrest would probably be greater," wrote Weber. "Particularly the groups that reject many pandemic measures anyway would be further radicalized."