The coronavirus pandemic has pushed China to shut down its live animal markets for good. But that doesn't mean that the wildlife trade is over or that the risk of a future outbreak is behind us. 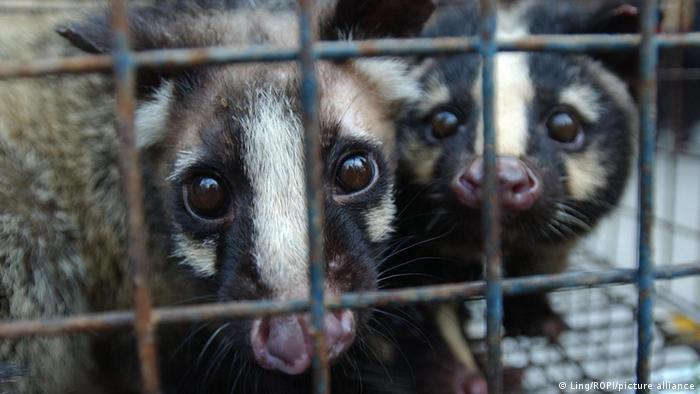 China's wildlife farms are the most likely source of the coronavirus pandemic, which has killed more than 2.7 million people around the globe since its outbreak a little over a year ago. This was the conclusion of a soon-to-be released report based on an investigation by the World Health Organization (WHO) and the Chinese government.

Slated for release in the coming days, the report does not rule out other theories about how the pandemic began. But experts involved in the investigation told journalists that they believed China's wildlife trade to be the most likely origin of COVID-19.

More studies are in the works. The results thus far support long-held suspicions that have already had devastating consequences for this bustling Chinese industry.

Theories pointing to China's wildlife trade emerged after many of the first cases of COVID-19 were linked to a seafood market in Wuhan that sold live animals. On February 24, 2020, just two months after the outbreak, China's Standing Committee of the National People's Congress expanded the country's wildlife protection laws, issuing a total ban on the trade and consumption of wildlife for food.

Stopping the trade "will be a challenging exercise," Li Shuo, a senior global policy adviser at Greenpeace in Beijing, said at the time, according to Bloomberg.

China's wildlife industry had a market value of an estimated $76 billion (€65 billion) in 2016, of which the exotic food sector accounted for some $19 billion, according to figures from the Chinese Academy of Engineering.

At the time of the ban in February 2020, the government announced a phaseout plan that would close all exotic food farms permanently by the end of September. Local governments were tasked with managing the transition.

"I've been following China's wildlife industry for the last 20 years. That decision was a huge surprise to all of us," Peter J. Li, China policy specialist for the animal protection nonprofit Humane Society International, told DW. Li is a professor at the University of Houston, where he teaches East Asian politics and animal law related to China.

Wildlife farming in China began on a very small scale in the early 1980s as part of economic reforms carried out by the government to lift people out of poverty. The government supported it heavily after the market began to take off nationwide in the early 1990s, happy to back anything that improved its citizens well-being, Li said.

Breeders were largely concentrated in the southeastern provinces. From there, a nationwide animal transportation network developed, dedicated to shipping live animals to markets and urban centers around China.

"These transporters have huge trucks. They don't just ship pigs, dogs, sometimes cats, wild animals, individually," said Li. "They put them all together on the same truck. That's the problem. When you have a large number of animals in crowded conditions, pathogens and viruses started to mutate many times."

Is China serious about curbing its wildlife trade?

Supporters of the industry say wildlife farming provides many benefits to China. It is good for conservation because it is farmed animals, rather than wild ones, that are used for food and other purposes. It supports public health because the animals are used to make traditional Chinese medicine. With some 14 million people employed in the industry in 2016, it is also good for fighting poverty.

"The wildlife industry has effectively contributed to regional economic development and greatly increased the economic income of farmers and forestry workers and local tax revenues," an industry report from the Chinese Academy of Engineering says.

China's wildlife lobby is made up of breeders, transporters, restaurants and even government officials — specifically, the state forestry bureau, which oversees wildlife farming, said Li.

"The state forestry bureau's budget depends on the size of the industry," he added. "So there is a bureaucratic interest in the industry being big."

The global SARS outbreak that lasted from 2002 to 2004 and killed some 800 people globally has also been linked to wild animals sold in China's wildlife markets. At that time, markets were also closed down, but were later reopened.

"The ban on the trade was lifted largely because wildlife business interests launched a strong opposition to sabotage that policy. And it succeeded," said Li.

After the COVID-19 outbreak, by the time China began reopening for business at the end of April 2020, southeastern provinces such as Hunan, Jiangxi, and Guanxi were already unveiling plans to phase out their exotic food industry. These eventually included financial compensation for licensed farmers whose operations were being forcibly shut down.

Hunan province said it would compensate farmers 120 yuan ($18, €15) per kilogram of snake and 75 yuan per kilogram of bamboo rat. They were also to be offered a flat fee for every porcupine, civet and wild goose, among other animals.

As for existing stocks, the Hunan plan instructed farmers to either release the animals to nature, use them for purposes other than food, or cull them, for example by burying or burning them.

Li said he expected that much of the trade would be reclassified and funneled into China's fur industry. With an estimated market value of $59 billion in 2016, this sector accounts for the largest share of the country's wildlife farming.

"The government believes the technology of farming these animals (for fur) is very mature, so they have not found any potential public health problem," he said. "But we argue it's just a matter of time."

Fur farming resembles the farming of exotic animals for food in that both industries keep a large quantity of live animals caged in cramped conditions. Since the outbreak of COVID-19, fur farms breeding mink in the Netherlands and Denmark have been forced to cull millions of the animals after some were found to be infected. The virus can mutate in minks and jump to humans.

By the end of September 2020, the Chinese government had managed to shutter almost all farms. Li does not expect an illegal market for exotic animal meat will emerge. The majority of Chinese do not eat these kinds of wild animals, he said.

"There is no such thing as consumer demand for snake meat, for civet meat," he noted. "The consumption is mostly supply-driven, so the business side promotes it."

In the past, restaurants touted exotic animal meat as offering special benefits, claiming snake, for example, could improve skin problems or help a child study for exams.

Chinese consumers and the government have a higher awareness now of the pandemic risk, said Li. And the changes to the country's wildlife protection laws will keep it from artificially propping up the industry as it did before.

With a national GDP of some $15 trillion in 2020, China's wildlife market is "just a drop in the bucket."