The latest figures have smashed analysts' predictions for the world's second-biggest economy. 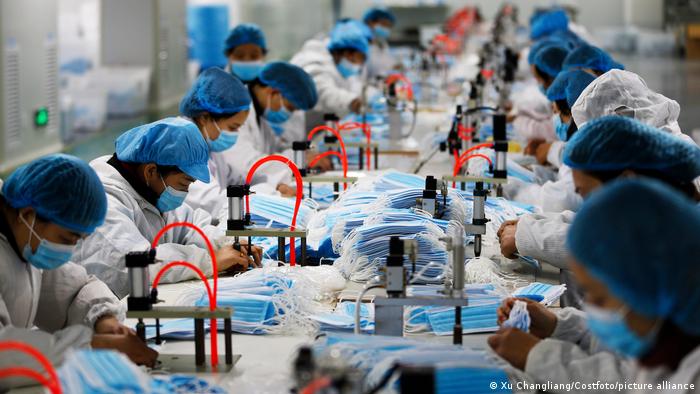 An increase in textile shipments, including face masks, has contributed to high export growth in China

China has reported the highest jump in export growth in over two decades, a year on from the coronavirus outbreak that brought economic activity to a near halt worldwide.

The latest figures are in stark contrast to last year's fall of around 17% in exports, during the same time period. This year's growth exceeded the forecast of analysts in a Reuters poll for a nearly 39% surge.

Imports also rose, but less sharply. They increased by just over 22% from a 4% drop in imports during the same time last year.

The comparison to last year's exceptionally low numbers likely boosted the latest figures. A "low base is one of the reasons for the larger increase this year," the customs administration said in a statement.

But some Chinese-made products did see spikes in outbound shipments.

This was driven by demand for work-from-home supplies and protective medical gear during the pandemic.

Improvements in manufacturing industries in the European Union and the United States that had ground to a halt during the start of the pandemic also contributed to export growth.

Unusually, many firms in export-oriented provinces stayed open over the Lunar New Year.

This meant that "orders that usually only get delivered after the new year have been delivered normally," the customs statement said.

Chinese factories traditionally shut during the Lunar New Year break, which fell in the middle of February this year, as workers return to their hometowns.

This year, the government asked workers to avoid traveling to curb the risk of a spread of the coronavirus.

The country's trade surplus with the US — a key point of contention during the trade war pursued by former US President Donald Trump — doubled from the same period last year to $51.3 billion.

Modest growth outlook for China in 2021

Despite the growth in exports, China is remaining cautious after a year disrupted by COVID-19 and amid heightened tensions, including the ongoing trade dispute, with the United States.

This year, China has set a modest growth target of at least 6%.