Coronavirus and the mink: Death in a fur coat

The mass killing of Danish minks shines a spotlight on a highly dubious industry. It also shows how little we value the lives and deaths of so-called farm animals. 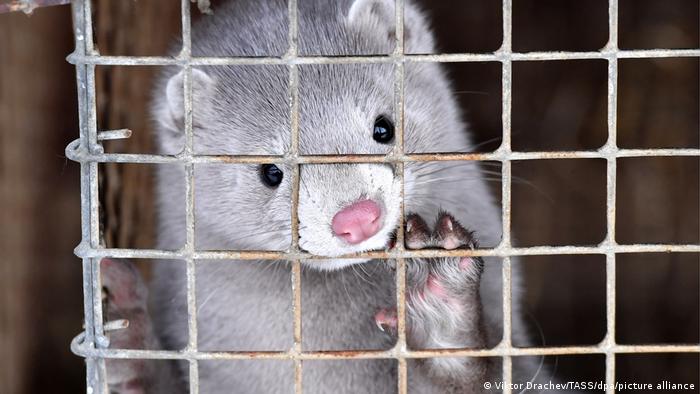 The pictures from Denmark are hard to bear. They show minks being gassed and millions of the animals being buried in mass graves using excavators.

But such mass killings of animals are neither unique nor new. Whether it's a matter of bird flu, swine fever, mad cow disease or foot-and-mouth disease, millions of chickens, cattle and pigs are regularly killed to contain epidemics.

And now it's the minks' turn.

The reason was that some animals had become infected with a mutated version of SARS-CoV-2, the virus that causes the disease COVID-19 in humans. There was immense fear the viral mutation could jump back to humans, further fueling the pandemic, with the additional risk that a vaccine could be useless against the new strain. An untimely death after a life spent in inhumane conditions

Given the dimensions of the threat, isn't such a radical step appropriate? This at any rate seems to be the standard consensus whenever animals are affected by a disease that could be dangerous to humans.

Reports on the infected and infectious minks clearly reflect this consensus: They have tended to be about the danger of the mutated virus for humans, about mink farmers who are now facing ruin, about minks resurfacing, zombie-like, from their earth-covered mass graves and about possible groundwater contamination.

There is little sense of remorse for the animals that have been tortured and killed.

The Danish prime minister, Mette Frederiksen, did indeed cry,  tears rolling down her cheeks in front of rolling cameras as she talked about the mink tragedy. However, her tears were not because she was so moved by the fate of the animals, but rather for the mink farmers whose "life's work has been destroyed."

Denmark has long been one of the largest global exporters of mink fur — but not anymore. The government ordered the so-called cull of all mink in the country. Kopenhagen Fur, the largest Danish auction house for furs, had to close down.

Mette Frederiksen is not the only person to be shocked: Edmund Haferbeck is also stunned. The reasons, however, could not be more different. Haferbeck is head of the science and legal department of the animal rights organization PETA. His sympathies are with the animals.

Haferbeck is an agronomist and did his doctorate on the topic of mink breeding; he comes "from the opposite side," he says.

In the course of his research, he visited some of Germany's fur farms. "At that time, between 1983 and 1989, there were still about 150 to 200 farms," Haferbeck says, relating that one of the things that struck him first was the "awful" smell emanating from barns containing thousands of animals. 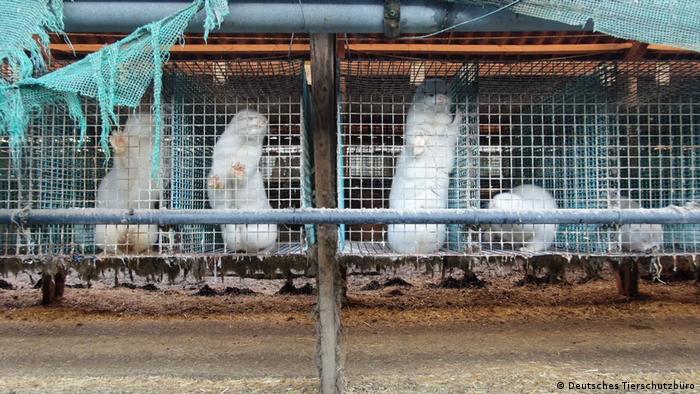 Life on a fur farm

As with all factory farming, fur farming is associated withenormous environmental problems. And it is also deplorable in terms of animal welfare. The minks spend their lives in solitary confinement in small wire cages. While the excrement falls through the grid floor, the food, a meat mush, is placed on the top of the cage, from where the animals pull it piece by piece through the wire mesh.

This is confirmed by Jana Zschille, a biologist and forest zoologist at Dresden Technical University, who has also visited mink farms. She, too, made minks the subject of her doctoral thesis, although in her case these were animals living in the wild in the German state of Mecklenburg-Western Pomerania. 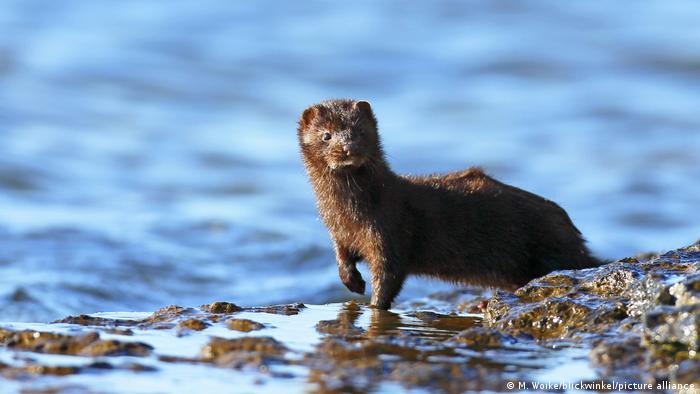 In the wild, minks live near water, sleep in burrows and roam at night

Zschille thus has a clear understanding of what minks need to live. And a small wire cage is definitely not the right habitation for them. "The animals are what is known as semiaquatic, like the otter, and always live near bodies of water. They hunt by the water, and they swim," Zschille says.

Minks climb well, sleep in burrows in the ground and in trees and prefer to roam their territories at dusk and at night. Zschille's descriptions make it very clear: Life on a fur farm is absolute torture for the animals.

Although the production of mink fur has been slumping for some time, according to Kopenhagen Fur, global demand is on the rise. According to UN data, China is by far the largest exporter of fur. Hong Kong and Russia are among the most prolific buyers.

The reasons why fur farming continues despite the suffering of the animals are economic ones. That is why the mass killing of these agile creatures is seen primarily as an economic mishap.

Do we care so little about the fate of creatures that live and die for a mere luxury good like fur? Or do we simply not care at all?

What is wrong with us?

Killing animals, whether for food or clothing, gives pleasure to very few people. Most do not want to cause animal suffering, psychologists say. But they still want to eat meat. And some people also want to wear fur.

These contradictory feelings and the moral dilemma that meat eaters get into as a result trigger what scientists call the "meat paradox." Much the same kind of paradox pertains to the wearing of furs.

Social psychologist Benjamin Buttlar from the University of Trier is conducting research on the meat paradox. He says people use a variety of strategies to justify to themselves the contradiction of not actually wanting to kill animals but nevertheless doing so for a number of reasons.

"First of all, we split animals into different groups, i.e., farm animals and pets," Buttlar says. The farm animals are devalued and perceived as less sensitive, he says, meaning that we can enjoy a steak while the dog is allowed to sleep in our bed.

The breeding of fur animals can be justified with arguments about its sustainability, for example. A statement from the German Fur Association sent to DW says that the "animals kept provide a sustainable natural material that has clear advantages over petroleum-based plastics that are worn today and thrown away tomorrow, thus severely polluting our environment."

However, this argument does not address the high level of resource consumption needed to feed meat-eating fur lovers, nor does it take into consideration the pollution caused by the animals' excrement and the chemicals needed to treat the pelts.

Another "rationalization strategy," as Buttlar puts it, is the norm set up by a society, condemning one way of acting while recognizing the other as normal.

In this respect, minks have an advantage over cattle or pigs: While people who wear fur are rare, most people eat meat.

Even though the animals exist only to die in both cases, the fact "that there is a greater moral outcry in the case of mink is probably also due to the fact that nowadays it is not necessarily considered normal to wear fur," says Buttlar.

According to Buttlar, these strategies, which also include the denigration of vegetarians, vegans and animal rights' activists, serve the purpose of balancing out cognitive dissonance, i.e. resolving the contradiction between knowledge, thought and action. After all, people generally find this inner conflict unpleasant.

Article 1 of the German Animal Welfare Act states, "No one may inflict pain, suffering or harm on an animal without reasonable cause."

A glance around the world is enough to show that there seems to be no shortage of such supposedly reasonable causes. 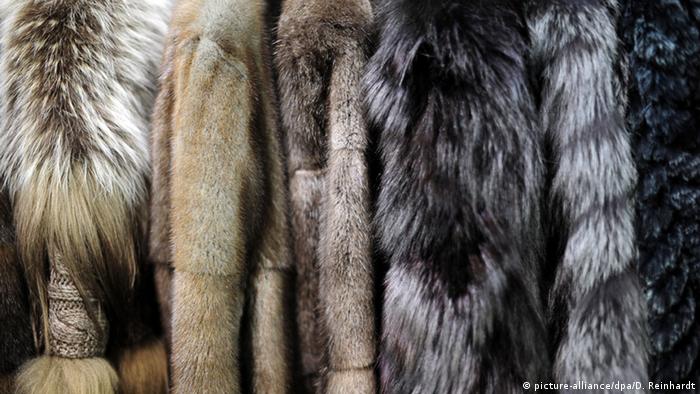 Is the production of fur coats the kind of 'reasonable cause' that the German animal protection law refers to?

For animal ethicist Johann Ach, the executive director and head of the Center for Bioethics at the University of Münster, the mere existence of this sentence in the Animal Welfare Act article encapsulates the dilemma regarding animals.

"Many animal ethicists take the position that a reasonable reason to kill an animal exists only if the death serves the animal itself," Ach says. This is the case, for example, when we have our pet put to sleep when it is in great pain and there seems to be no end in sight to its suffering.

According to this interpretation of animal ethics, there would never be reasonable cause "when animals are tortured and killed in the interests of humans," Ach says. He says the wording of the Animal Welfare Act reflects the hierarchy that exists between humans and animals: humans above, animals below.

Do animals have souls?

This attitude explains not only factory farming for meat production, but also fur farming and mass slaughter to contain an outbreak of a disease.

If the answer is yes to the question of whether exploiting an animal is a legitimate human interest, then the demonization of fur farming on the one hand, and of the torture and slaughter of animals seen as necessary for the purposes of food production on the other, is based on nothing more than an arbitrary morality.

Just as no one is required to wear fur, no one has an obligation to eat animal products. Either way, for the animals themselves, it makes no difference why they are suffering and dying.

Coronavirus: Denmark to exhume millions of minks over pollution concerns

The work will begin in May 2021, when the risk of coronavirus contamination from the dead animals has been eliminated. Denmark culled more than 15 million minks last month in a bid to prevent the spread of COVID-19.

WHO Statement about Minks and coronavirus