COP23: US absence felt on first day of UN climate summit | Environment| All topics from climate change to conservation | DW | 06.11.2017

As the 23rd annual UN climate conference kicks off in Bonn, people are already jostling to fill the climate power vacuum left by a retreating United States. 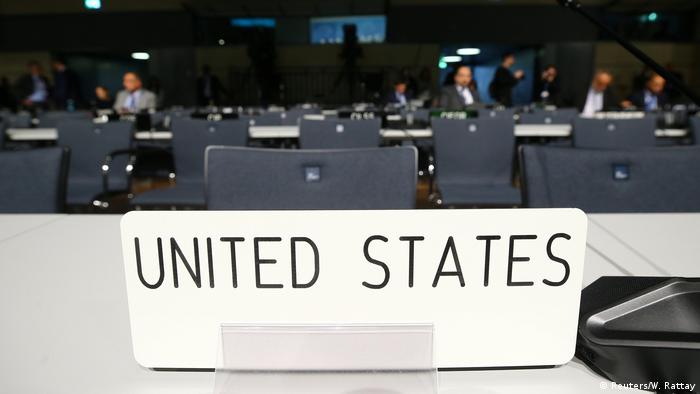 The small city of Bonn, Germany, was inundated with thousands of delegates today for this year's UN climate summit. Over the coming two weeks, negotiators will hammer out the rule book for the Paris climate agreement reached two years ago.

The VIPs will not arrive until next week for the intensive final days of the summit. But already, the politicians are gearing up for a battle between people claiming to speak for the United States.

Donald Trump announced earlier this year he will pull the United States out of the Paris Agreement. However, the withdrawal process takes three years, leaving the United States in as a signatory until then. President Trump is sending a small delegation to Bonn that will try to continue to shape the rules of the agreement.

The role this delegation intends to play, and what role it should be allowed to play, was the subject of much debate on the first day of the summit.

- COP23: High time to curb emissions as 2017 to become hottest year on record

For the first time ever, the United States did not set up a pavilion at this year's UN summit – the only developed country not to do so. But a rival group of US governors, mayors and business leaders, called the We Are Still In coalition, is opening a "US Climate Action Center" pavilion on Thursday. It is led by California Governor Jerry Brown and former New York Mayor Michael Bloomberg. "For the first time, the US government is unlikely to create a space at these talks to tell America's story of climate action," says Lou Leonard, senior vice president for climate change and energy at the World Wide Fund For Nature (WWF). "So at this round of negotiations, the real news about US climate action will be delivered to the world by leaders of US business, cities and states attending these talks as a unified delegation working together to accelerate climate action in the American economy."

All of this means there will be two competing US delegations at this year's summit, which has left people wondering who really speaks for the United States.

"My view is that the sub-national delegates truly represent the interests of Americans, they are closer to public opinion on this," said Alden Meyer, director of strategy and policy at the Union of Concerned Scientists, a group urging climate action, at a press conference today in Bonn.

"But on the issue of negotiating though, under our system of government it is the executive branch of the federal government that represents the US in these negotiations," he added.

- Opinion: Heed the cries for help from Fiji

With no visible US presence yet in Bonn from either camp, delegates are split over whether to focus more on talking to the official US delegation, or the unofficial one.

Many believe that the US will not end up pulling out of the agreement, and so it is better to talk to the rival delegation for now. "This is an aberration, and whoever takes power after President Trump will restore the US back into the Paris Agreement," said Meyer. 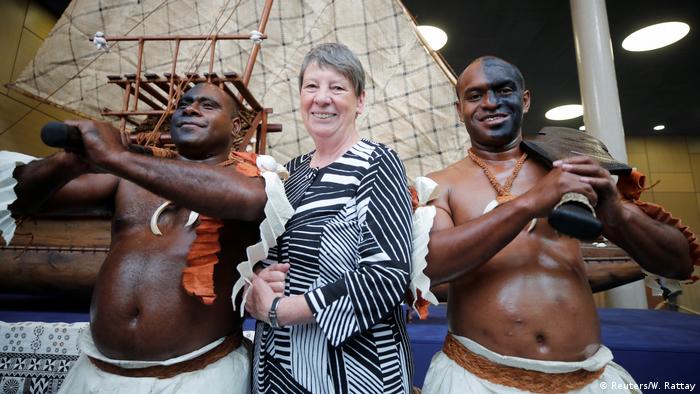 Barbara Hendricks, Germany's environment minister, told DW that she believes the official US delegation should be engaged with."I am very pleased, because [US] state secretary Rex Tillerson has a very balanced position," Hendricks said. "I am confident the American delegation will not disrupt the negotiations."

"The world has come a lot closer together," she added, "especially because of the megastorms in the Caribbean, and the US exit from the Paris Agreement has strengthened the unity between states."

Meanwhile, countries and financial institutions are lining up to fill the power vacuum left by the United States. China has been keen to step in, maintaining a large pavilion at this year's summit and taking on a more assertive role behind the scenes, according to diplomatic sources.

The European Union is also moving to fill the vacuum. French President Emmanuel Macron and German Chancellor Angela Merkel will both come to Bonn next week.

- Climate change is happening — but it's not game-over yet

Companies and financial institutions are more involved in this year's summit than ever before, prompting some grumbling from NGOs who believe the process is being hijacked by strong financial interests.

Jonathan Taylor, Vice President of the European Investment Bank, gave a press conference in Bonn today saying the public lending institution has seen a huge uptick in private sector commitments in the past months. The bank, which ties its loans with private sources, has pledged to provide €100 billion ($116 billion) for climate action projects by 2020.

"We are on track to deliver on our commitment," he said.

The EIB will hold a mini-summit with other public and private lenders on Thursday in Bonn to talk about how to scale up climate investment. 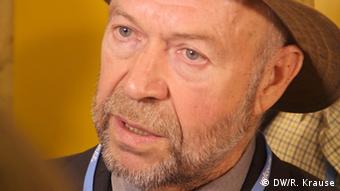 Whichever US delegation countries choose to engage with, the resentment felt toward the US decision at the summit runs deep. Trump's decision was the subject of near-universal scorn at the first day's press conferences.

James Hansen, the former NASA scientist who has been nicknamed "the father of climate change awareness" because of his early warnings in congressional testimony in 1988, gave a press conference blasting the Trump decision and presenting the latest climate science. He was joined on stage by his 18-year-old granddaughter, Sophie Kivlehan, who is suing Trump and the US government for inaction on climate change.

"Adults, you say you love us, but I challenge you to make your actions match your words," she said. "If you continue to pursue your selfish aims, the result will be enormous suffering for your children."