Island nations of the world, unite! The UN climate conference in Bonn symbolizes cooperation between those responsible for climate change and its victims, says Klaus Töpfer, former head of the UN environment program. 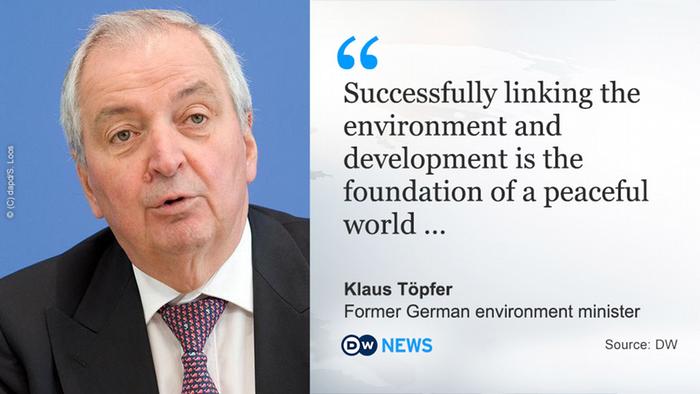 At the climate talks in Paris two years ago, it was the small island nations' cries for help that led to a breakthrough in negotiations.

Now, one of those states – the Republic of Fiji – is hosting the 2017 UN Climate Change Conference, the 23rd Conference of the Parties, or COP23, in the UN city Bonn.

This collaboration between Fiji and Germany is highly symbolic as it stands for cooperation between those responsible for climate change and those who are most severely affected.

Just as symbolic: the German Environmental Prize committee this year bestowed its honorary lifetime achievement award posthumously on the former foreign minister of the Marshall Islands, Tony de Brum. Brum's daughter accepted the prize and gave a touching speech, echoing her late father's words in urging every single individual to act in a way that preserves the oceans and contains climate change so temperatures will not rise by more than 1.5 degrees Celsius. 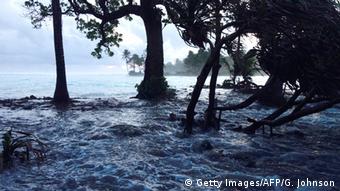 Island nations have pinned their hopes on the world community

That is the aim at COP23 in Bonn: After agreeing on the goals, it is now time for a show of strength and solidarity to realize that universally accepted climate strategy. That means focusing all efforts on limiting, as best as possible, the predicted two-degree rise in temperatures to 1.5 degrees.

In view of the current upheavals in world politics, increased aggression motivated by ideologies, and ruthless military violence, some people may have given up all hope of such global cooperation.

However, resignation and pessimism have never solved problems — they have always made them worse.

There are many reasons pointing to successful cooperation on climate issues: first and foremost, technologies that allow for the competitive production of energy by resorting to renewable energies.

Further incentives include the solid increase in energy efficiency and the expansion of scientific, financial and economic cooperation.

Then, there is a growing awareness that failure will have dire consequences for everyone.

The necessity of effectively limiting the reasons why people flee their countries by introducing social stability and economic prospects shows at the same time this is not wishful thinking to expect to see a snowball effect against climate change: a continuously intensifying surge of investment that in a world with less CO2, an economy that is free of carbon dioxide wherever possible ­— in short, realizing a sustainable world.

Environmental protection for a peaceful development

The successful fight against climate change is a prerequisite to realize the 17 Sustainable Development Goals and the 2015 Paris accord, which was adopted unanimously by the UN General Assembly. At the 1992 Conference in Rio de Janeiro, both the environment and development were recognized as global challenges. Successfully linking the environment and development is the foundation of a peaceful world with nine billion inhabitants — the world of our children and grandchildren.

Fiji's roughly 900,000 inhabitants, and the many thousands, even millions of people who live in small island nations and in coastal areas around the world, the people who live in regions threatened by desertification — they all will be watching Fiji's conference in Bonn with much hope. The negotiators and the participants should not disappoint them.

Klaus Töpfer, 79, is a leading German environmental and climate protection expert. As German environment minister at the 1992 UN environment summit in Rio de Janeiro, he was operative in the creation of the UN Climate Convention. From 1998 to 2005, Töpfer was executive director of the UN environment program UNEP in Nairobi. In 2009, he founded the Institute for Advanced Sustainability Studies (IASS) in Potsdam. He currently works for the think tank TMG in Berlin.

Iraq: 11 villagers killed in 'IS' attack 6h ago