In a week during which a Europe-US rift seems to be deepening, the Chinese premier became the second major Asian leader to arrive in Berlin. Talks will focus on closer cooperation on trade and climate issues. 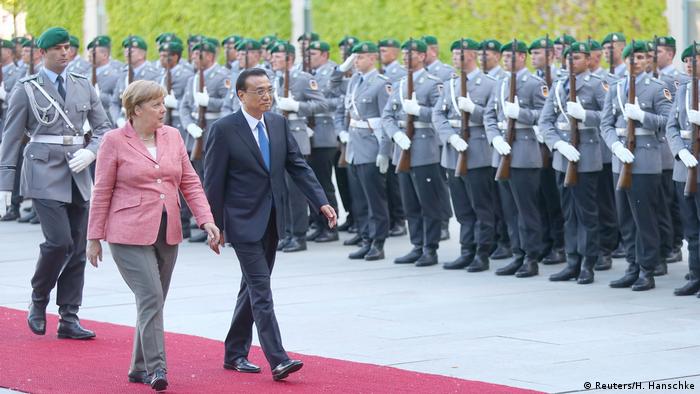 China's number two official kicked off two days of meetings in Berlin with German Chancellor Angela Merkel ahead of wider meetings with European Union leaders in Brussels on Thursday.

His visit came amid a deepening rift between the US and Europe . After "unsatisfying" G7 talks last week , Merkel said that Europe now has to forge its own path forward, as the US and Britain were no longer reliable partners - comments that made waves through Europe.

This has been a week of Germany reaching out to Asia, with Merkel signing a range of agreements with Indian Prime Minister Narendra Modi in Berlin on Tuesday.

The EU has been turning to China to bolster leadership on climate change following speculation that the US President Donald Trump plans to withdraw from the Paris Agreement. The EU and China plan to reaffirm their commitment to the Paris Agreement during a bilateral summit in Brussels on Thursday, according to a briefing by an EU official and a draft joint statement statement seen by news agencies AFP and DPA.

"The EU and China underline their highest political commitment to the effective implementation of the Paris Agreement in all its aspects."

EU climate commissioner Miguel Arias Canete said "the EU and China are joining forces to forge ahead on the implementation of the Paris Agreement and accelerate the global transition to clean energy."

In just over five weeks, Germany is hosting the G20 leadership summit in Hamburg, in which it plans to push climate change onto the agenda. Li was meeting with Merkel to discuss economics and trade issues and prepare ground for the summit.

Several Chinese ministers traveled to Berlin with Li and were due to meet with their German counterparts in the evening.

The EU has also been increasingly looking to China for support on free trade, after a shift towards protectionism from the US. Last week German Foreign Minister Sigmar Gabriel met his counterpart in Beijing, and signed a joint commitment on promoting free trade.

The head of the Asia-Pacific Committee of German Business, Hubert Lienhard, called on China to make good on its commitments to open markets.

As Li arrived in Germany, the country's biggest lender Deutsche Bank announced US$3 billion (2.7 billion euros) worth of investments in cooperation with the China Development Bank as part of the Belt & Road Initiative.

The two banks signed a memorandum of understanding expressing "interest in promoting the renminbi's internationalisation and in financing economic cooperation between China, Germany and other Belt and Road Initiative countries," according to a statement.

Human rights organizations called on Merkel to urge Li to take concrete steps to improve human rights in China. Amnesty International, the International Campaign for Tibet and the media organization Reporters Without Borders criticized President Xi Jinping's as being responsible for systematic repression of human rights.

The German chancellor did not mince words after the G7 fiasco, saying 'the times when we could fully rely on others are somewhat over.' Is the transatlantic relationship over? Dagmar Engel takes a closer look. (29.05.2017)