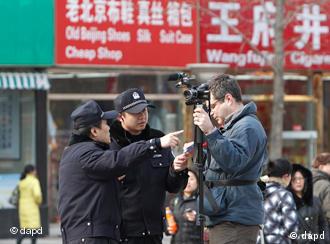 Chinese police ask a cameraman to leave the protest site

German TV teams were among foreign reporters and media barred by Chinese police from covering planned anti-government protests in Beijing on Sunday.

Police detained Christine Adelhardt, correspondent for German ARD public broadcasting, along with her team, alleging that she had no permission to film along the city's main shopping street Wangfujing.

Adelhardt and her crew were released four hours after being detained.

"We were told that there are new regulations that you can't film at certain areas without permission," Adelhardt told German news agency, DPA. She was made to present a written apology that she did not know about the new rules before she was released.

Johannes Hano - correspondent for Germany's other main public broadcaster, ZDF - and his crew were also detained. According to Spiegel Online, they have since been released. 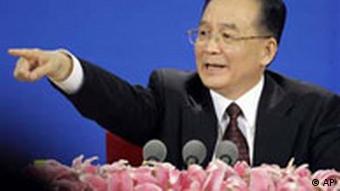 Wen promised to deal with some main public concerns

DPA said one of its reporters was also detained briefly at the Wangfujing underground station - just one of dozens of designated protest sites.

A few reporters complained of heavy-handed tactics by the police. A Taiwanese reporter was reportedly injured during the scuffles.

For the second straight week, police officers were mobilized in Beijing and Shanghai to smother demonstrations following anonymous calls on the ruling Communist Party for greater openness.

"The purpose of our economic development is to meet the people's growing material and cultural needs, and to make the lives of commoners better and better," Wen told gatherings in Beijing.

China's leaders have watched with worry as similar issues have ignited popular uprisings that have toppled multiple regimes in the Middle East and North Africa.

The call for Chinese 'Jasmine rallies' - a direct reference to the "Jasmine revolution" in Tunisia that set off a domino of unrest in Egypt, Libya and elsewhere, has not urged participants to take any overt protest action, but merely to turn out in force.

No actual demonstrations were reported in Beijing or Shanghai on Sunday. Thousands of police, however, were reported to be deployed at the designated protest sites.

With this year's awarding of the Nobel Peace Prize to Liu Xiaobo it is the first time a Chinese citizen has received the award. The pro-democracy activist, who co-organized "Charter 08" has been in jail since 2008. (08.10.2010)