Gene Sharp, the leading scholar of nonviolent resistance, tells Deutsche Welle that with the ongoing revolts no regime in the Middle East can feel safe anymore. He also says Europe and the US should not interfere. 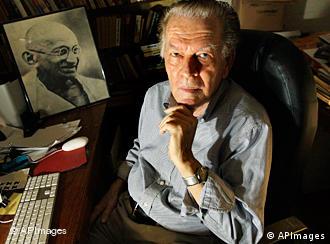 Gene Sharp is Professor Emeritus of political science at the University of Massachusetts Dartmouth and a Nobel Peace Prize nominee. In 1983 he founded the Albert Einstein Institution, a non-profit organization dedicated to the promotion of nonviolent action in conflicts. He has written numerous books on the concept of nonviolent struggle, of which "The Politics of Non-Violent Action" is generally regarded as the rulebook of nonviolent resistance.

Deutsche Welle: When you witness the popular revolts in the Middle East unfold, are you surprised at all or have you always believed that it was ultimately just a question of time until people in the Arab world would rise up against their oppressors?

Gene Sharp: Both. Tunisia I didn't expect at all. Egypt, I know a little about and I had some contacts with the Arab world earlier on. There had been a conference in Amman, Jordan on nonviolent political struggle some years ago that I was a major participant in, but I did not expect this. I certainly had confidence in people that they were finally going to liberate themselves. And they knew certainly how to do it and how to do it skillfully. They did it in such a disciplined way in Egypt, it's really quite remarkable.

You are 83 years old now and have devoted your life to the study and advancement of nonviolent resistance against dictatorship and oppression. Do you believe that eventually all forms of government that are not somehow democratically based are doomed to collapse at some point?

That's too sweeping for me. I think there will always be people who would like to push other people around and exploit them for whatever personal, political, ideological or economic reason. People will always be attempting that kind of thing and I can't imagine there will be a United Nations of only free people and free countries. That's why vigilance is necessary and why people have to learn not what their goal should be but how to get there. And that requires a lot of understanding of politics and nonviolent struggle.

An amazing trademark of the ongoing popular revolts in the Middle East has been that so far even in the face of violence by security forces people have not resorted to violence, but remained peaceful. How important of an achievement was this for the protestors?

That's an amazing achievement, particularly in Egypt when you had demonstrations which on one day had reportedly over one million people and with rare exceptions they kept nonviolent discipline. When it seemed that the situation was getting out of hand and might break into violence people were saying "peaceful, peaceful." That's an amazing achievement. I don't know of any other time in world history when you had that kind of a demonstration in one day with that many people that they succeeded in keeping it nonviolent. But that proves it's possible. And keeping it nonviolent was one of the major reasons for their success.

Within weeks what seemed unthinkable only months before happened: The regimes in Tunisia and Egypt fell, and autocratic rulers in many other Arab states are on the brink of collapse. Are there any regimes in the region that you would say can feel safe or could even such hard-line regimes as Iran, Syria or Saudi Arabia fall?

I think the hard-line regimes will not dissolve quickly. They may be able to hang on for a while. But much depends on not just the nature of those regimes which are often not very nice, but on the perception and the skill of the people. Because people power is more than masses of people going on the streets. That's a very romantic conception of what's to be done and not the way to get the greatest power impact. They have to learn how to do it.

But I think the basic principle is true that even dictatorships are vulnerable to massive nonviolent struggle and can be brought down. And it doesn't take centuries, but they can be brought down within months, weeks or days. And that is a repositioning of the scale. It is comparable to some of the pre-Bolshevik Russian revolutions of 1905 and 1917. But this is happening on a more limited geographical scale and a more limited time scale. This is new. In other words: The genie is out of the bottle. How people can achieve their freedom in tough situations and you can't put that secret back into the bottle again. People will always be able to know that this happened before and therefore we can do it also.

You are a strong advocate of people power and you believe that only the people within countries can and must take action to free themselves from their regimes. But as the situation in countries such as Libya deteriorates and people get massacred can Europe and the US just stand by and do nothing?

Excuse me but I think Europe and the US should stay out of it. Likely they won't understand what's going on. And the statements in Washington indicate that there is nobody in the administration who knows what kind of struggle this is. And whatever they decide to do will be in their own US or European interest and not in the interest of the people in Tunisia or Libya whatever they say.

They can make things worse because people have suffered under extreme dictatorships before and people have resisted before and sometimes won. It's possible. They can win this way. And then the lesson will be taught that no matter how cruel and brutal and ruthless you become you are not going to win against this type of struggle.

For a long time now you have been a vital source for democracy activists from Serbia, the Ukraine to Egypt and elsewhere but you have also been a target for regimes like Iran which even featured you in a propaganda video as a public enemy. Despite that you and your small institute were hardly known to a larger audience, but now you are called the man who changed the world or the Clausewitz of nonviolent resistance. How do you deal with this sudden public attention?

With difficulty. The Clausewitz credit was on the basis of my major book "The Politics of Nonviolent Action" which was published in 1973. With this new attention we try to respond to all the inquiries to give interviews where we can, but it's difficult because there have been so many. But I always like to emphasize that I didn't do anything. All I did was offer my studies and analyses which pointed to the weaknesses of all regimes and the fact that they have weaknesses and they have sources of power.

The Serbs in their struggle against Milosevic studied the sources of power on which the Milosevic regime was based and therefore targeted with nonviolent struggle those sources of power. That's the secret. It's the people who have carried out that struggle in Tunisia and Egypt and elsewhere they deserve the credit.

You didn't grow up or live in an oppressive regime yourself. What then was your personal motivation to devote your life to the study of nonviolent struggle?

I was aware of the Nazi regime and what had happened in the Holocaust. I knew there was the Stalin regime in the Soviet Union. I knew there were a lot of other problems in the world like European colonialism, various dictatorships and in the United States racial segregation and discrimination and the importance of civil liberties and labor movements.

And I was guided to certain books, mostly from the 1930s about nonviolent struggle which in terms of today's situation are quite elementary, but nevertheless revealing. One book I think cited 12 cases of nonviolent struggle in the world history. And I thought that was amazing that that could have happened. We now know that there were hundreds of thousands of cases. And I learnt more and more.

Later on I was studying in Norway and I met people who were in the resistance then and I met people in the Dutch movement. I read studies about the German resistance inside Nazi Germany, The Rosenstrasse Protest was one of these. And I knew this was something. There is an American economist Kenneth Boulding, who said: that which is, is possible. If it has happened already, it can happen again - he called it Boulding's first law, in a tongue-in-cheek way because he wasn't very conceited.

And we can learn how this works, what makes it succeed, what makes it fail and how you can develop strategies and increase your chances of success. How people can mobilize themselves, take charge and keep discipline. All the testimonies in various places, even some recent ones in Libya and it was certainly true in Egypt say "we have lost our fear, we are no longer afraid" and "you can't control us any longer by threatening or doing this or that."

And they have also learned to keep it nonviolent because your enemy, your dictatorship can fight for survival. That's the one thing they are good at. So if you chose to fight with violence against this oppression you are not going to succeed because you are fighting with your enemy's best weapons. Nonviolence is the secret. The age of the dictators will be short-lived.

There's a general consensus among policymakers and analysts that the uprisings in Egypt and elsewhere were unpredictable. That's untrue. There were plenty of experts who warned concretely about an impending crisis. (21.02.2011)