After meeting in Paris, the Chinese and French presidents have announced deals worth billions of euros. But officials have warned that EU member states may "find themselves dependent" on Chinese investment. The French presidency said Airbus has signed a deal to sell 300 planes to China Aviation Supplies Holding Company, including 290 A320s and 10 A350s. Other deals covered energy, transport and the food industry.

In anticipation of the visit, Xi had penned a column in conservative newspaper Le Figaro urging French companies to join the Belt and Road Initiative, the official name for the massive infrastructure project aimed at establishing greater links between Asia and Europe.

"French investors are welcome to share development opportunities in China," said Xi. "I also hope that Chinese companies can do better in France and make a greater contribution to its economic and social development."

Read more: China's Xi seeks to calm EU as Italy signs up for Belt and Road 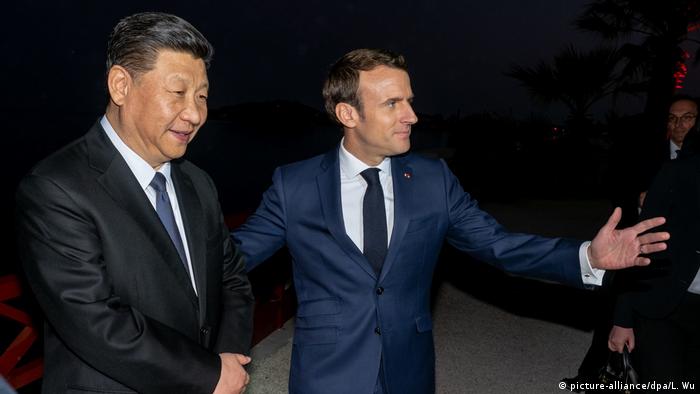 Chinese President Xi Jinping has called on French companies to join the Belt and Road Initiative, but EU officials have warned of a lack of transparency and the potential for dependency.

In Germany, officials have been wary of Chinese attempts to get EU member states on board with Beijing's Belt and Road Initiative. Last week, Italy became the first G7 country and major EU economy to sign a non-binding pact for the project.

"In a world with giants like China, Russia or our partners in the United States, we can only survive if we are united as the EU," said German Foreign Minister Heiko Maas. "And if some countries believe that they can do clever business with the Chinese, then they will be surprised when they wake up and find themselves dependent."

But the German government isn't the only one concerned. EU officials have also urged member states to be cautious, saying China must be more transparent and provide greater access to countries.

In an interview published Sunday, EU Budget Commissioner Günther Oettinger expressed "concern that in Italy and other European countries, infrastructure of strategic importance like power networks, rapid rail lines or harbors are no longer in European but in Chinese hands."

Other infrastructure projects, including the rollout of 5G networks, have come under wider scrutiny, in part due to heightened fears that Chinese involvement could compromise national security. Telecommunications company Huawei has been singled out by the US and other countries for purportedly maintaining close ties to Chinese security services.

However, that hasn't stopped some European countries from moving forward with Huawei. Last year, the coastal city-state of Monaco announced that Huawei would create 5G networks to cover the entire country.

Delegates to China's ceremonial legislature have approved a new law to address Western grievances about unequal market access and IP theft in the Asian giant. But concerns remain among European and US businesses. (15.03.2019)