Germany has warned that EU countries are not yet prepared to sign a joint statement on China's "Silk Road" trade initiative. Economy Minister Brigitte Zypries has called for more free trade guarantees from Beijing.

German Economy Minister Brigitte Zypries on Sunday warned that Germany and other EU countries would not sign a joint trade statement at China's Belt and Road Forum unless they received more guarantees from Beijing on free trade, environmental protection and working conditions.

"So far, the demands of the EU countries in areas such as free trade, setting a level playing field and equal conditions have not been met," she said in a press briefing on the sidelines of the summit in Beijing. "If these demands are not met, then we cannot sign. We'll see what happens tomorrow."

A communique is expected to be published on Monday at the end of the forum, at which China is seeking support for a new "Silk Road": a trade and infrastructure project linking China with countries in Central and Southeast Asia, Europe, the Middle East and Africa. 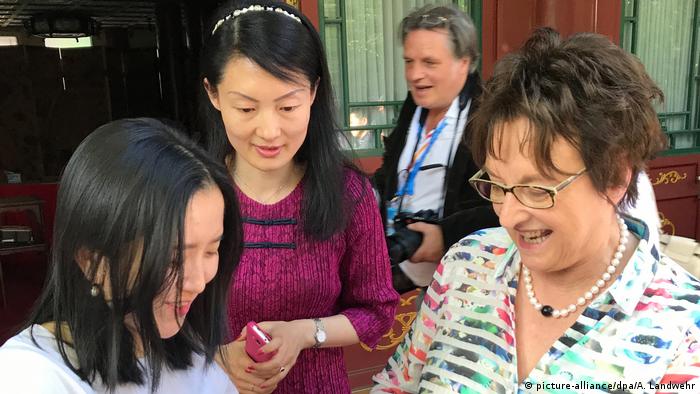 Zypries: "There is still a problem between our states"

However, western European countries have tended to send ministers or lower-ranking officials to the forum in a sign of their unease about the plan, which some see as an attempt to promote Chinese global influence. A number of Western diplomats also have reservations about the initiative's lack of transparency and formal structure.

Zypries on Sunday called for more transparency in tenders for projects related to the initiative, and insisted that it should conform to international trade standards.

"Germany does want to take part, but tenders need to be open to everyone; only then will German companies take part," she said. "It must also be clear what is actually going to be built. At this point, it's not clear."

A draft of the communique that is meant to be issued on Monday says the initiative intends to uphold "the rules-based, transparent, non-discriminatory, open and inclusive multilateral trading system with the WTO (World Trade Organization) at its core."

India has boycotted the forum to indicate its displeasure that part of a planned China-Pakistan corridor will run through the disputed Kashmir region.