China's ongoing trade spat with the US has dominated Japan PM Shinzo Abe's visit to the country. The first Sino-Japanese summit since 2011 could further thaw relations between Asia's two biggest economies. 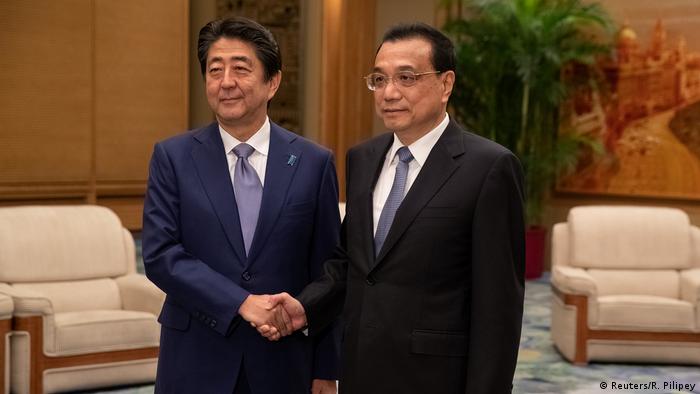 On his first bilateral visit to China, Abe added that the two countries need to normalize ties and work together on the North Korea issue.

Abe's trip China comes at a time when Beijing is locked in a trade dispute with the US, with both countries imposing reciprocal tariffs.

President Trump has also targeted Japanese exports in his effort to reduce US trade deficit.

"The visit is certainly a historic turning point. The ties between the two countries deteriorated in the past few years, with Japan wary of China's assertive policies. On the other hand, Beijing is unhappy that Abe refuses to address Japan's wartime past," said Mathias Boelinger, DW's correspondent in Beijing, adding that both sides have to show flexibility to improve relations.

"Trump is not the only reason, but he is certainly a major reason behind China's interest in mending ties with Japan. China fears the US is trying to isolate it," he added.

Later on Friday, Chinese President Xi Jinping and Abe discussed how to boost economic ties between the world's second and third largest economies.

China is Japan's biggest trading partner and many Japanese companies have invested large sums in the country.

Delegates from 500 Japanese firms are visiting China along with Abe. While Japan is eager to access China's massive market, China is interested in Japan's technology and corporate expertise.

Together they signed business deals worth $18 billion (€15.8 billion) while the two countries agreed on a $30 billion currency swap.

Ties between China and Japan have taken a positive turn over the past several months. This was evident during the recent meeting between Xi and Abe at a September summit in Russia's far-eastern city of Vladivostok.

"Though the US is quite an influential factor in China-Japan ties, the effect is limited," China's Global Times newspaper said in an editorial.

"If Beijing and Tokyo intend to plan their future bilateral relationship based on Washington's attitude, they will only get lost," the state-run daily said.

In the past, Japan had aimed to limit Chinese growing political and military clout in Asia. Beijing and Tokyo have unresolved territorial disputes involving a group of uninhabited islands, called Senkaku in Japan and Diaoyu in China. They are currently administered by Tokyo, but Beijing claims sovereignty over them.

Before heading to Beijing, the Japanese prime minster said he would discuss the North Korean issue with President Xi.

While Japan wants complete denuclearization of North Korea, China remains the biggest backer of the Kim Jong Un regime in the region.

Abe told media on Friday that his country is committed to normalizing ties with North Korea, but several issues, including North Korea's kidnapping of Japanese citizens, must be resolved first.

The EU, China and Japan have decried the Trump administration's idea to also heap US tariffs on imported vehicles - on top of steel and aluminum. Washington's "national security" argument is "far-fetched," says Brussels. (24.05.2018)

US Secretary of State Mike Pompeo says progress on the North Korean nuclear program has been made during his trip to east Asia. There had been little movement since a historic June meeting between Trump and Kim Jong Un. (08.10.2018)