After the Trump-Kim summit, another major meeting with the North Korean leader may be on the horizon. A summit would mark a significant shift for Japan's prime minister, who has long held a hard-line stance on Pyongyang. 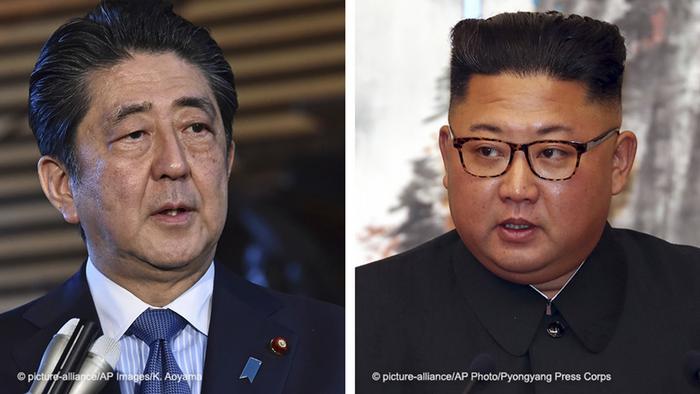 Japanese Prime Minister Shinzo Abe has said he is willing to "get off to a new start" with North Korea by meeting with leader Kim Jong Un.

Addressing the United Nations General Assembly on Tuesday, Abe said any summit with Kim would focus on resolving a dispute over the abduction of Japanese civilians in the 1970s and 1980s.

"In order to resolve the abduction issue, I am also ready to break the shell of mutual distrust with North Korea, get off to a new start and meet face to face with Chairman Kim Jong Un," he said.

Abe emphasized there currently aren't any concrete plans for a North Korea-Japan summit, but said that addressing the kidnappings would be a priority at any meeting with Pyongyang.

"North Korea is now at a crossroads where it will seize or fail to seize the opportunity it was afforded," he added.

Abe's comments mark a significant shift for the Japanese leader, whose gained popularity for his hard-line stance on North Korea.

In his UN address last year, Abe warned that the window for diplomatic negotiations with Pyongyang was closing.

Speculation that Abe could meet with Kim arose after US President Donald Trump's historic June summit with Kim in Singapore. The North Korean leader reportedly told Trump that he was open to talking with Abe.

North Korea's abduction of Japanese citizens is an emotional issue for many in Japan. Scores of people were kidnapped from Japan and used to train North Korea's spies in Japanese culture and language.

Japan's former prime minister, Junichiro Koizumi, traveled to North Korea in 2002 and 2004 in an attempt to improve ties with Kim Jong Il, the current leader's father.

Koizumi was told the remaining Japanese citizens who had been kidnapped were now all dead. The families of the victims, as well as activists, rejected Pyongyang's stance.

In order for the summit to take place, North Korea would also likely push for concessions from Japan — including an apology for Tokyo's rule over the Korean Peninsula from 1910-1945.

Japanese PM Abe has dramatically toned down his anti-North Korean stance, but the issue of the abduction of Japanese nationals is likely to remain a major sticking point between the two sides. Julian Ryall reports. (26.09.2018)

A Japanese man in his 30s, who was arrested for video taping footage of a North Korean military facility, is set to be 'expelled' from the country. The move comes as Japan seeks to improve relations with Pyongyang. (27.08.2018)

All eyes were on US President Donald Trump and North Korean leader Kim Jong Un as they met for historic talks in Singapore. Between handshakes, they committed to denuclearizing the Korean Peninsula. (12.06.2018)