China and the US seek military dialogue

For years, China has been involved in territorial disputes with its neighbors. But the United States now fears that allies such as Japan and the Philippines might be drawn into a conflict with Beijing. 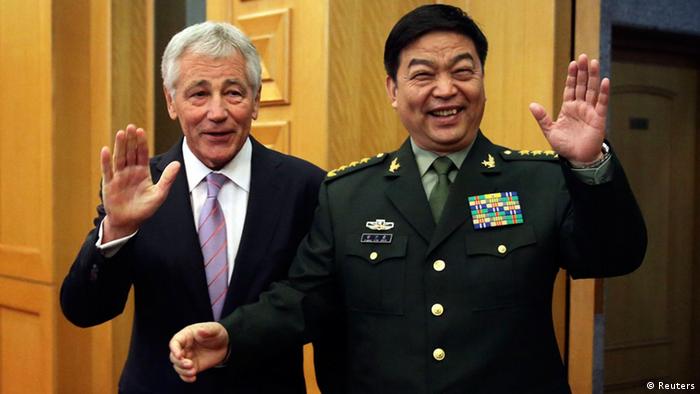 At the start of his three-day trip to China on April 7, US Secretary of Defense Chuck Hagel (pictured left) traveled to the eastern port city of Qingdao to pay a visit to the symbol of China's military rise, the aircraft carrier Liaoning. China purchased the 60,000-ton carrier in 1998 from Ukraine and has been retrofitting it ever since.

Although experts believe it may take years for the carrier to be fully operational, the naval vessel underlines China's military ambitions. The appearance of the US Defense Secretary as a guest on the aircraft carrier was an important symbol, according to Asia expert Gerhard Will. "The gesture shows that the two sides want to ease tensions and communicate with each other at the highest military level,"he said. 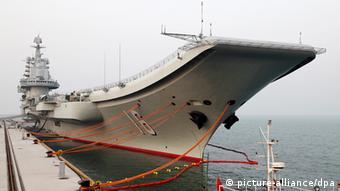 The symbol of China's military rise: the aircraft carrier Liaoning

Sino-American ties have been challenged for several years, especially due to China's rise and the resulting power shifts in East and Southeast Asia. China's heightened geopolitical status runs parallel with increases to its military expenditure. In 2014, Beijing's defense budget increased by 12 percent, making it the second largest in the world, second only to Washington's. The US responds to China's growing clout by increasing its engagement in the region.

Security expert Michael Paul, of the German Institute of Security and International Affairs (SWP), says that the rise of China and the American "pivot" to Asia could eventually "lead to a direct confrontation."

Conflicting claims between China and its neighbors over vast swathes of territory in the South and East China Seas could trigger such a confrontation. For instance, in the East China Sea, Japan and China claim ownership of the Senkaku / Diaoyu islands, a chain of uninhabited rocks believed to be rich in natural gas reserves.

At the same time, in the South China Sea China, Beijing lays claim to an area that is almost one-and-a-half times the size of the Mediterranean. The territory encompasses countless islands that are believed to be rich fishing grounds with abundant ambient oil and natural gas deposits. Vietnam and the Philippines strongly oppose many of China's assertions in the South China Sea.

The US is stepping up efforts to defend Japan against threats from North Korea and China. Several disputed islands in the South and East China Sea have the potential to threaten the stability of the entire region. (09.04.2014)

Analysts from Japan's National Institute of Defense Studies call on Tokyo and Beijing to discuss a shared crisis management system, arguing that increased regional tensions may cause minor incidents to escalate rapidly. (02.02.2014)

As a long standing ally of both Japan and the Philippines, the US could be forced to take action in the event of a conflict. Before landing in China, Hagel had visited Japan where he underlined China as a great power and said that Beijing had a great responsibility.

Regarding the territorial disputes, Hagel said: "You cannot go around the world, redefine boundaries and violate territorial integrity and the sovereignty of nations by force, coercion or intimidation, whether it's in small islands in the Pacific, or in large nations in Europe." The US Defense Secretary also called for more transparency in order to "prevent misinterpretations and misunderstandings and, ultimately, to reduce the risk of a conflict."

The state-affiliated Chinese news agency Xinhua called on Hagel to acknowledge Washington's China-friendly intentions and said that the two largest economies in the world could not afford confrontation. Nevertheless, the Chinese Defense Minister Chang Wanquan stressed that although Beijing would not provoke a conflict, all military options would remain on the table for the defense of China's territorial sovereignty.

However, Asia expert Will disapproves of the parallel drawn by Hagel and others between the crisis in Ukraine and the conflicts in the East China Sea. He argues, for instance, that China would view referendums such as the one held in Crimea as threats, especially if conducted in regions like Tibet or Xinjiang where ethnic groups are striving for independence.

Instead, security expert Michael Paul sees some similarities between the current stand-off and the political constellation shortly before the outbreak of World War I in 1914. In a recently published study, Paul points to four major developments in the German Reich which preceded the outbreak of the war: Germany's fear of encirclement, fantasies to become the dominant power in Europe, nationalism and the build-up of the navy.

All of these factors can be applied to modern-day China. "Nowadays, the People's Republic of China is striving to play a dominant role in Asia, and - similar to the German thirst for power back then - the Chinese are resorting to naval might to achieve this," Paul said. 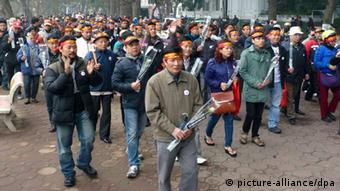 The territorial disputes between China and neighboring countries have sparked protests

The expert added that for years Beijing has been feeling increasingly encircled and staking everything on the nationalist card. According to the latest version, China fears it is being encircled by "the missile defense systems of the US and its allies, which stretch from Japan over the South China Sea all the way to India," Paul said.

Trade is no guarantee for peace

The analyst stressed that the similarities between today and 1914 don't necessarily mean that war is inevitable, but he also pointed out that peace in the Pacific was "by no means certain."

Asia expert Will told DW that "trade relations alone cannot replace a security architecture." In this context he pointed to the situation in Europe just before World War I, arguing that the fact that the German Reich had close economic ties with its European neighbors wasn't enough to prevent war. "This is why it is important to study the story of the events unfolding in Southeast Asia," he said.