Charcoal from tropical forests has a terrible effect on the environment, but it also puts food on peoples' tables. Nigeria is one of the world's largest exporters — and some of it even ends up on German barbecue grills. 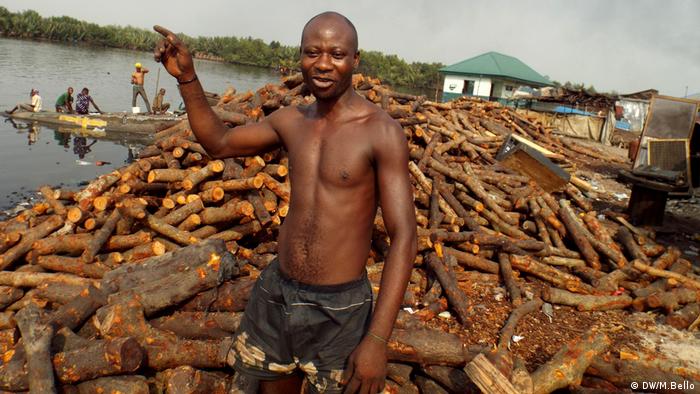 Felling, transporting and piling up logs of wood is back-breaking work. "Sometimes we're in the bush for weeks before we've collected enough wood," explains Domingo Philip (above), who heads the team of young men. They cover the two meter (78 inch) high pile of wood with earth and start up a fire. The wood now needs to smoulder for about 11 days. Then the charcoal is ready for Philip and his men to sell.

The area where they cut the wood is Edumanom Forest Reserve. The 9,000-hectare tropical forest lies in the oil-rich Niger Delta in southern Nigeria. It's home to Nigeria's last chimpanzees. But the fragile ecosystem is in danger, not only from the oil industry but also from the woodcutting. The trees are cut down, and the burning process produces fumes that are harmful to the people and the environment. It poisons the groundwater and the surrounding soil. Moreover, immense carbon emissions are produced.

But Philip and his men live from this business. They sell the charcoal to local households, bakeries or traders that take it to the big cities. A 50-kilogram (110-pound) sack costs the equivalent of about €3 ($3.56).

Traders in the city, however, get a lot more for the charcoal. They pack it in paper bags and sell it on to Europe and Asia. "I have one Arab client who really sifts through the charcoal to check the quality," says Abubaker Usman, a local producers in the town of Bauchi. "He exports the best quality charcoal and sells the rest locally in Nigeria." 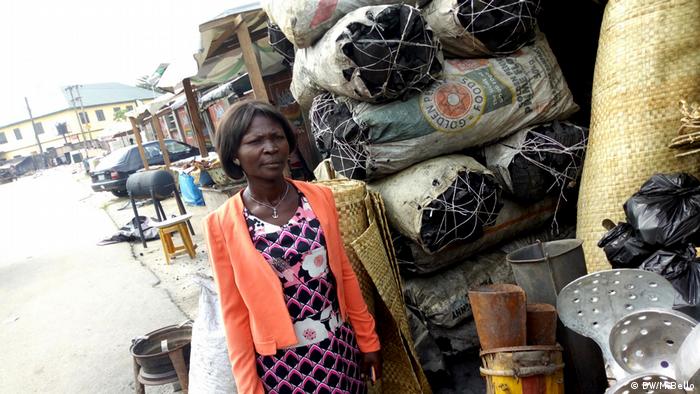 Charcoal sells for the equivalent of €3 on the local markets

According to the UN, Nigeria exported 80,000 tons of charcoal for approximately €25 million ($29 million) in 2007, which makes it one of the biggest exporters of charcoal worldwide. Germany, on the other hand, is the biggest importer in Europe, taking in 250,000 tons (50 million pounds) of charcoal per year.

Very few Germans, however, know that they're running their grills with a charred piece of tropical swamp forest. According to the environmental organization Tropical Forest Trust (TFT), 34 percent of the imported charcoal comes from Poland, while charred wood from tropical forests in Nigeria and Paraguay each make up 15 percent of the imports. But even the charcoal from Poland contains tropical woods. In Poland charcoal from around the world is repacked and then sold to neighboring countries.

Loopholes in the European Timber Regulation makes such things possible. The regulation came into force in 2013 and was established to stop illegal wood and paper products from entering the EU. But while tropical woods are tightly regulated, charcoal does not even appear in the paper.

"Why certain wood products are not included in the regulation is a puzzle to me," Johannes Zahnen from the World Wide Fund for Nature (WWF) told DW. "For several products it's basically up to the traders to ensure that their products are legal."

Zahnen and his colleagues conducted their own investigation into 20 of these products. They're sold at gas stations, supermarkets and hardware shops across Germany. The study found that 80 percent of the sacks they examined were labeled with incorrect information about the origin of the products. Some even contained wood from protected tree species.

"The marketing strategies are often sloppy or contain outright lies," says Zahnen. On closer examination, for instance, a sack that was labeled clearly as containing no tropical wood actually consisted entirely of tropical wood. "The consumer is practically left out in the cold and has no chance to do anything about it," Zahnen explains. 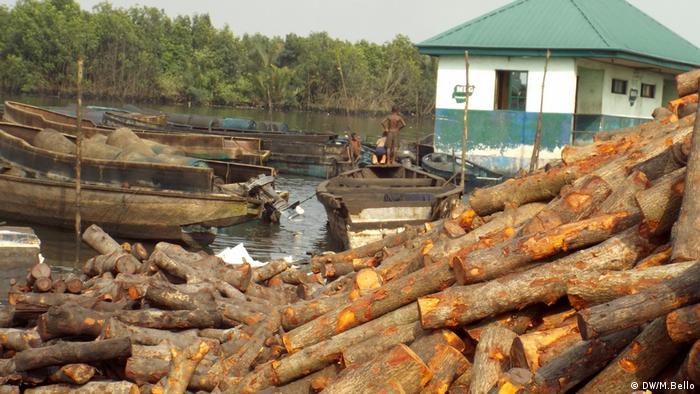 For many here at the riverside, the logging business is an important source of income

Could the trees disappear?

More than half of the world's felled wood is turned into firewood or charcoal, according to the UN. Three-quarters of the charcoal production takes place in Africa and about 98 percent of the charcoal stays on the continent. That is because while Europeans mainly use the charcoal for barbecues in the summer, African households use it for cooking every day.

In the Nigerian town of Bauchi, the business is booming. "Kerosene is so costly. That's the reason why people use charcoal," says charcoal trader Ibrahim. From his profits he was able to build a house.

There is little awareness about the environmental hazard of the woodcutting. "The bush does not finish, so as they cut trees, many more will grow," says Rachael John, who uses the charcoal to roast plantains at a local market.

In the dry season in particular, local farmers turn to charcoal production for survival. Yet by doing this, they not only contribute to global warming but also destroy their own livelihood. Each year, Nigeria loses approximately 350,000 hectares of fertile land to desertification and soil erosion.

According to Nigeria's National Council on Environment, the country's current forest cover is under 4 percent. In October 2017, the office recommended a ban on charcoal exports.

Johannes Zahnen sees this as a short-term solution to curb the export of illegal wood products. "If the charcoal comes from sustainably managed plantations, the exports business could actually help the country,” he says. Modern production methods could increase the production five-fold, but the problem has to be addressed at its root.

For instance, the amount of charcoal needed could be reduced by using charcoal-saving stoves. Such stoves cut the costs at the household level and produce less harmful smoke for the people using them. In addition, they're often easy to build with locally available products like clay. "Such simple methods can reduce the demand and therefore also the effect on the environment," says Zahnen.

Muhammad Bello and Aliyu Muhammad Wazir contributed to the report.

Firing up the local economy - Poop-Charcoal in Kenya

Firing up the local economy - Poop-Charcoal in Kenya

A haven for Nigerian wetland wildlife

The Eden Creation Care Initiative has transformed land scarred by mining, with an organic fish farm to boost the local economy, and a plant nursery that offers hope for Nigeria’s threatened forests. (27.10.2016)

Is there a good side to palm oil?

Palm oil is often synonymous with deforestation, pollution and bad agricultural practices. But an example from Sierra Leone shows that it doesn't have to be. (18.07.2017)