Challenges ahead for new German government | Germany | News and in-depth reporting from Berlin and beyond | DW | 22.09.2013

During her third term, Chancellor Angela Merkel will have to tackle a number of problems. DW takes a look at the most pressing issues. 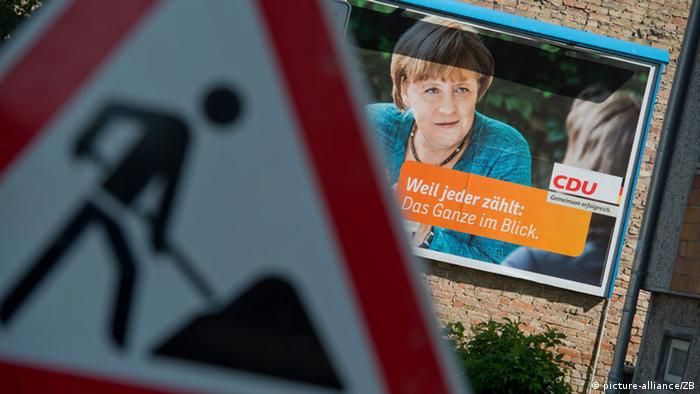 Beyond talking politics, little is actually done while elections are in full swing. Important decisions are put on hold for months, becoming all the more pressing once elections are over. Such is the case for a pivotal foreign-policy issue that politicians would have loved to avoid entirely: the euro crisis.

That issue, it's safe to say, has come to a halt - but not a full stop. Once elections are over, the euro crisis is likely to dominate the news once more. 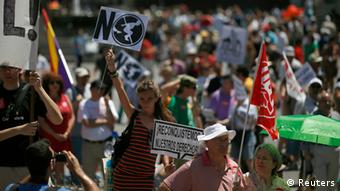 Anti-austerity protests in Madrid - will the euro crisis pick up steam again in the fall?

Though Europe's struggling economies have recently been faring a bit better, Greece will presumably not get back on track alone with its accumulated national debt of about 300 billion euros ($400 billion).

Even German Finance Minister Wolfgang Schäuble (CDU) recently had to admit that Greece would need yet another delivery of aid.

"The public was told that again and again in the Bundestag," he said. According to leading economic research institutes, EU member states will have to decide on new aid packages at the end of this year at the very latest.

Germany is faring better than most other EU member states. Its economy is booming, and tax revenues are higher than ever.

Still, Germany has debts of 2.1 trillion euros - and the country's spending continues to surpass tax revenues. Several federal states are heavily indebted; many cities and municipalities are broke. All parties want to change that but can't agree on how best to do so.

Increase taxes or increase savings? The Social Democrats (SPD) and Greens, both currently opposition parties, have announced they want to increase taxes on high earners. Merkel's CDU and its junior coalition partner, the Free Democratic Party (FDP), don't want that to happen.

"The plans by Social Democrats and Greens to increase taxes carry the risk of destroying the good initial position we have rather than improving it," Merkel during a TV election debate with challenger Peer Steinbrück.

Simultaneously, most parties also want to spend more on pet projects. For the CDU, that's higher pensions for moms; the SPD and the Greens want to spent more on education and day-care; and the Left Party is eager to increase social welfare.s

Another that will play a big role is equality - especially in terms of education. Every child is supposed to have the same chances in life, but that's a far cry from reality in Germany at this point. A child whose parents are well educated has a much higher chance of graduating with a university diploma than a child from a family with a low educational background.

Then there's the debate on fair salaries. "There are so many people who work all day long, but get such low wages that they can't make a living off it," Steinbrück said.

That's why there have been many arguments of late in favour of a mandatory minimum wage - for all employees, in all of Germany. 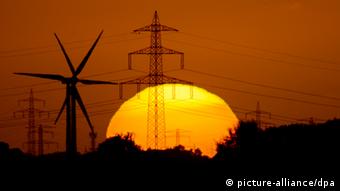 The German health care system is also under fire, since those on a private insurance plan get better treatment than those who on compulsory public health plans. And who will be able to pay for the care of the elderly and the sick, some ask, if numbers of older people rise while the number of young people paying in to the program decrease?

On the energy front, Germany has made a lot of progress since deciding to phase out nuclear energy and switch to renewables roughly two years ago. At this point, some 23 percent of Germany's energy needs are met via solar panels, wind turbines and biogas plants. Germany's ambitious goal is to hit 35 percent by 2015. But the project has hit a snag: There are not enough pipes to transport electricity where it's needed.

"Nothing has been pushed forward," SPD chairman Frank-Walter Steinmeier said. "The energy turnaround has hit the wall before it's even started."

In addition to that, it's putting a financial strain on German citizens. Electricity from renewable energy sources is partly financed through an extra charge paid by electricity customers; the more environmentally-friendly electricity being generated, the higher the charge.

The energy turnaround has also been criticized for granting exemptions to many companies, particularly those in energy-intensive industries that are internationally competitive.

Dealing with refugees: Who can stay in Germany for how long? 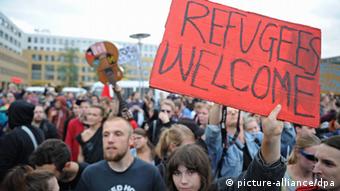 A number of Germans support taking in refugees

Internationally, the crisis in Syria is high on Germany's agenda. Hundreds of thousands of people have fled the civil war in Syria - and Germany is expected to take some of them in.

Initially, Germany is going to give shelter to about 5,000 refugees - not that much given Germany's population of 80 million. Still, there are discussions about where to place them and the state of their accomodation. In some places, citizens are fighting against having too many refugees in huge shelters in their own neighborhoods.

What's also been criticized is the rule that refugees are not allowed to leave a certain area without permission. The size of that area is regulated by individual states in Germany. Refugees are usually also not allowed to work, something a number of refugees have been protesting against.

Some even went further than demonstrations and protest marches, temporarily going on hunger strikes.

Euro crisis, domestic debt, education, fair salaries, health care, energy and Syria - all are important domestic issues that will have to be tackled in the next four years.

Euro crisis could return this fall

Debate has been raging over new aid for Greece, and EU finance ministers are grumbling again about a number of other problems. Is the euro crisis on its way back? (17.09.2013)

A successful and stable economy, low unemployment and declining debt: Germany seems to have come through the crisis with no significant injuries. Is this a credit to the Merkel government? (16.08.2013)