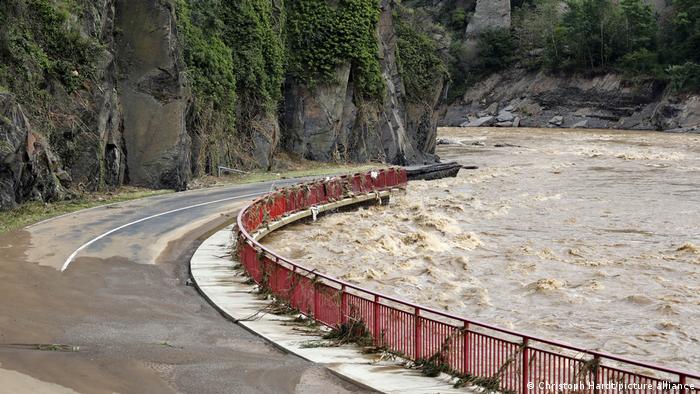 Before devastating floods swept across western Germany in mid-July, killing 184 people, Germany’s Ahr valley was a popular destination for wine lovers and hikers. But now, there is little left for tourists to explore: Vineyards have been destroyed, trails and roads have been washed away. It will take years for tourism in the region to recover. The flooding could be a wakeup call for other touristic regions in Germany to adapt to climate change — or suffer the consequences.

Climate change is real and can be illustrated by facts and figures, according to Peter Hoffmann of the Potsdam Institute for Climate Impact Research (PIK). "Droughts that last for years or devastating floods are already happening much more frequently today than predicted twenty or thirty years ago," he says.

Climate change is picking up pace

Even Germany, which until recently has been largely spared of such extreme weather, will in the future be affected more often by heavy rains, heat waves or storms. Yet it's impossible to predict exactly where natural disasters will take place.

"In recent years, the development has accelerated, so we can assume that 1 degree Celsius will be added every 30 years," says Hoffmann. That's why, he adds, it is important to act now. "The measures we take today will have an effect in 30 years' time." 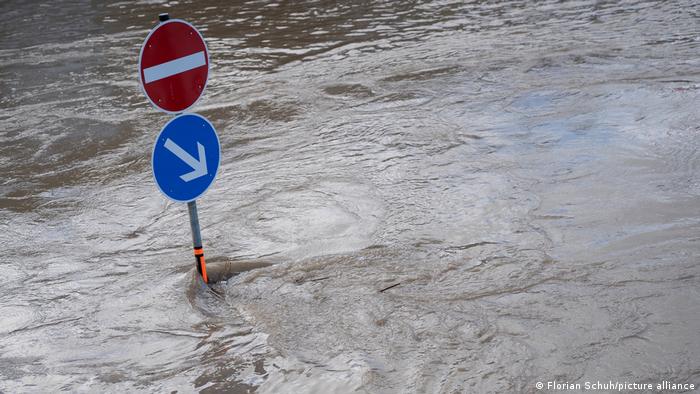 The German Tourism Association (DTV) has long been committed to helping tourism destinations adapt to climate change, emphasizes DTV deputy managing director Dirk Dunkelberg. "The DTV has been promoting sustainability for 30 years — back then, it was called 'soft tourism.'

"Ten years ago, we worked with the German Environment Agency to organize an event about how low mountainous regions will have to adapt their winter tourism season to a future where there is less snow due to climate change."

Since then, mountainous regions such as the Black Forest and the Harz have expanded their tourism offerings to include more indoor activities, spas, cycling and hiking trails, says Dunkelberg.

In view of the extent of natural disasters — including fires, droughts and floods, among others — it is clear that the tourism industry must change its course to adapt to climate change. Yet some say this is happening far too slowly.

Wolfgang Günther from the Institute for Tourism Research in Northern Europe (NIT) in Kiel calls for adaptations to be made at a faster pace. He says it is important to have "more flexibility" to be better prepared for changing weather conditions and to be able to modify or develop completely new offerings in a respective region. 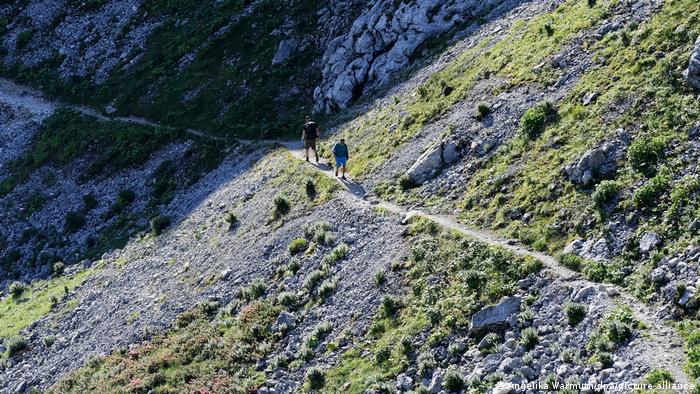 Expanding tourism offerings, including making new hiking trails, is one way to diversify

Sometimes it helps to look beyond an area's geographical characteristics to find solutions, says Hans-Joachim Hermann. He heads the department for international sustainability strategies, policy and knowledge transfer at the German Environment Agency.

Hermann cites an example from Switzerland, where in 2003, the Stockhornbahn AG — a travel company in the Bernese Oberland — decided to stop operating ski slopes and instead focus on a different kind of winter tourism. "The ski operation was running at a loss ... so they developed a new business model that focused on excursions, expanding gastronomy, as well as a wide range of nature-oriented summer and winter activities, while reducing winter operations from Wednesday to Sunday."

In order to create similar success stories in Germany, the German Environment Agency, together with the German Tourism Association, PIK and other associations, created a guide called Adapting to Climate Change: Shaping the Future in Tourism. It offers tourism managers well-founded factual knowledge and ideas about how to make the respective holiday regions successful in the future by using new tourism strategies. 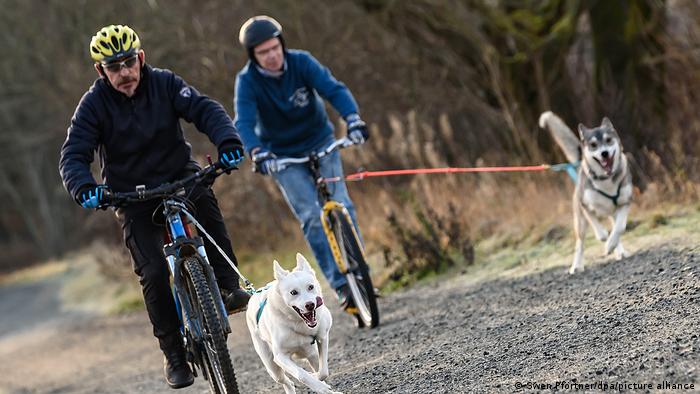 Some tourism regions have promoted cycling to expand offerings

The earlier the better

All experts seem to agree that the basic rule when implementing new strategies is: the earlier, the better. This includes an economic dimension, emphasizes Günther of the NIT. "Reacting early is definitely cheaper than having to make repairs afterwards."

This could mean, for example, creating new routes for hikers before the existing paths are destroyed by floods. Winter sports resorts, for example, could expand hiking and cycling tourism offers when snow is no longer guaranteed.

Once a natural disaster occurs, only a functional early warning system and evacuation plans can help bring people to safety. The example of the Ahr Valley made such deficits in existing disaster management all too clear.

Since then, there has been a debate about how to improve the warning and alert system in Germany. In the future, this could mean sending SMS messages to warn people, which already happens in many countries, including the US and Japan. Sirens could also be installed in case power is cut and mobile phone networks fail in affected regions. 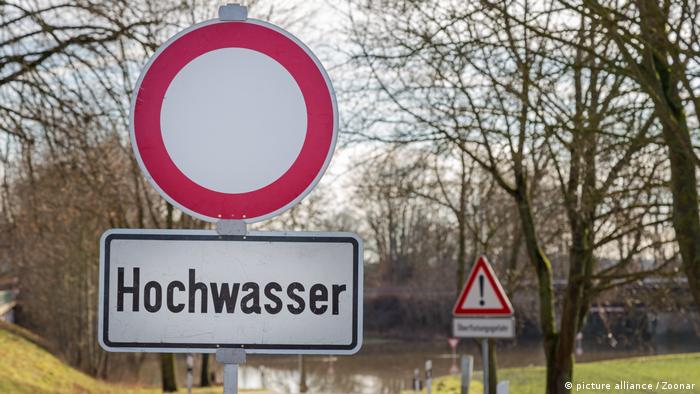 Extreme weather will become the norm

Shortly after the major storms in the Ahr valley, a spring flood occurred in the Höllentalklamm gorge near the Zugspitze mountain in Bavaria, killing a tourist and forcing more than 100 people to be brought to safety in a dramatic rescue operation.

Such events, says Hoffmann of PIK, will soon become the norm rather than the exception. According to his examination of German Meteorological Service records over the past 20 years, "flash floods and flooding can occur anywhere." He adds, "the effect of the damage then depends on how built-up the area is, and how well-sealed the landscape and infrastructure is."

Furthermore, extreme weather will only become more extreme, Hoffmann goes on. Heat will linger for longer, heavy rains will become more intense, and storms more violent. "The diagnosis has been made, now it's time for therapy — also for the tourism industry," he says. How creative the approaches are is entirely up to those responsible for the sector. 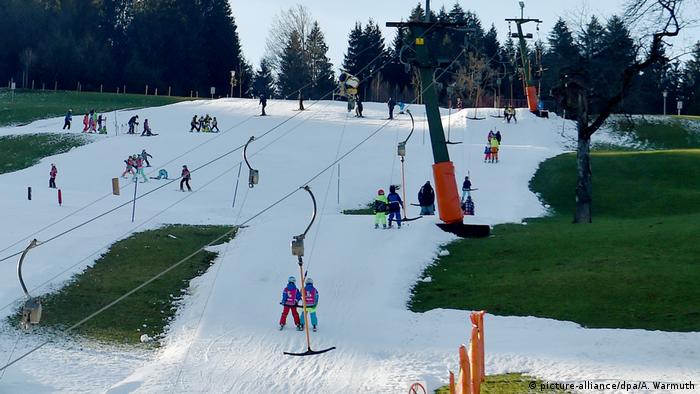 Rising temperatures will make a lack of snow on the slopes more frequent, including here in Fischen im Allgäu, Germany

Günther adds that tourists have also changed their expectations. As they expect more commitment to environmental protection, the offerings are being adapted. For many, it is no longer attractive or acceptable for snow-starved ski slopes to simply buy more snow machines to make snow in an otherwise green environment.

Yet Günther also observes that many destinations have not yet accepted this reality. "Some will succeed, others will be caught up in their failures," he says. "The faster we turn the trend around, the better things will be."

A Bike Tour on the Lech River

Lukas Stege tours the mountain river: From Forbach in Austria to Landsberg am Lech in Germany. He visits Füssen, Neuschwanstein Castle, learns how to do the popular Schuhplattler folk dance and soaks up nature.