′Bride′ trafficking – How Chinese gangs lure Pakistani girls into fake marriages | Asia | An in-depth look at news from across the continent | DW | 11.05.2019

Pakistan has arrested a number of Chinese nationals for marrying Pakistani girls and then forcing them into prostitution in China. The scandal has shocked the Islamic country, S. Khan reports from Islamabad. 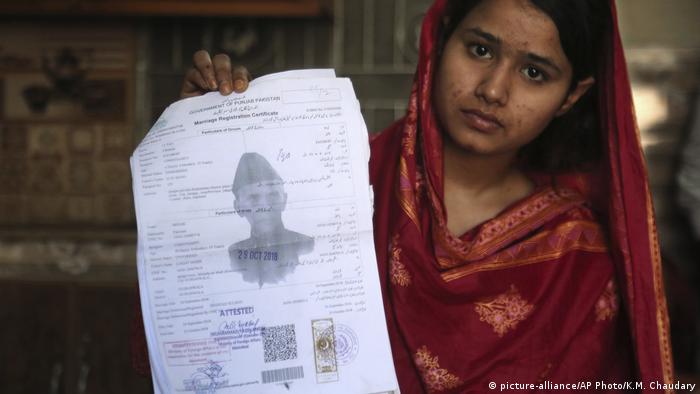 Basheer Ahmed, a 60-year-old partially handicapped man in Pakistan, was offered a tiny house by the government. A middle-class resident of the eastern city of Lahore, Ahmed had never owned a house, and worried about being financially able to marry off his daughters as quickly as possible.

"It was a difficult task," Ahmed, a Quran teacher and a father of four, told DW, adding that he desperately started looking for a suitable match for one of his daughters.

Ahmed said that some agents from a matchmaking center approached him a few months ago and presented a marriage offer for his daughter. "They said that they had a proposal from Chan Yen Ming, a Chinese national who had recently been converted to Islam, for my 24-year-old daughter Yamna Bibi. They said that Chan was ready to bear all expenses for the wedding and that he would even allow Bibi to work in China," Ahmed said.

Ahmed added that Bibi and Chan tied the knot on January 4. "It was a huge relief for me. After the marriage, Bibi stayed in Islamabad for a month and a half, awaiting her travel documents. We remained in contact with her during that time. After she received her documents, she flew out to China."

Ahmed was hoping that his daughter would get a job in China, which would allow her to send some money to her family in Pakistan as he could hardly make ends meet. But one day he received a call from his daughter, who was crying on the phone. "My daughter told me that we had been cheated. Chan was not a businessman as the agents told us, and he tried to force Bibi into prostitution. When she refused, Chan beat her up," a heart-broken Ahmed said.

"I informed the matchmaking agents in Islamabad. Their chief was called David but his real name was Wei Lin Ping. I contacted Wei to inform him about the situation. But I was shell-shocked by his reply. He told me that Chan had spent 2 million Pakistani rupees (€12,568, $14,121) on my daughter, and that if I wanted my daughter back, I must pay back an equal amount of money," he continued.

Later I found out that it was actually a big gang involved in fake marriages, human trafficking and organs sale, Ahmed said.

"But I did not lose hope and contacted the Pakistan embassy in China. They rescued my daughter and ensured her safe arrival back. She returned to Pakistan on May 3," Ahmed said.

Bibi, who was present while her father narrated the story, told DW that her life has been ruined because of the scandal.

Bibi's case is only one of the many fake marriage scams that have surfaced in the past few weeks. Most of these cases involve Chinese men and their agents (including local agents) who lure young Pakistani girls into marrying them.

Many lower and middle class Pakistanis want to move out of the country for the sake of better economic opportunities and living conditions. China, although not the first choice for Pakistanis who want to leave the country, is still attractive enough for those who live hand to mouth in the South Asian country.

The presence of Chinese nationals has also increased in Pakistan in the past few years due to an increasing Chinese economic investment in the country. In 2015, China announced an economic project in Pakistan worth $46 billion. With the China-Pakistan Economic Corridor (CPEC), Beijing aims to expand its influence in Pakistan and across Central and South Asia in order to counter US and Indian influence. Many Pakistanis are learning Chinese to be able to work in Chinese companies opening up in their country.

The fake marriages news and pictures soon started circulating on social media, shocking the nation and alerting the authorities. Last month, a Pakistani news channel claimed it had gained entry to a matchmaking center in Lahore where poor families would marry their daughters off to Chinese nationals in exchange for money and a visa.

This led to a raid by Pakistan's Federal Investigation Agency (FIA) on Thursday. The authorities arrested eight Chinese nationals and two Pakistanis at the building, which was allegedly being used as a guest house for the Chinese men who were brought to Pakistan to marry girls. The authorities reportedly confiscated at least six Chinese passports. Three more Chinese nationals were arrested from other parts of the city on the same day.

A spokesman for the FIA told media that a probe into the fake marriages scandal had been launched.

In a statement published in Pakistan's Dawn newspaper, the Chinese embassy in Pakistan said that "according to investigations by the Ministry of Public Security of China, there is no forced prostitution or sale of human organs for those Pakistani women who stay in China after marriage with Chinese."

"China is cooperating with Pakistani law enforcement agencies to crack down on illegal matchmaking centers. We remind both Chinese and Pakistani citizens to remain vigilant and not be cheated," the Chinese embassy in Islamabad said.

Human Rights Watch said Pakistani authorities should be "alarmed" at the reports of "bride" trafficking from Pakistan to China. The rights watchdog warned these cases are "disturbingly similar to the pattern of trafficking of 'brides' to China from at least five other Asian countries."

Asad But, a Karachi-based official of the non-governmental Human Rights Commission of Pakistan, told DW that the government needs to be vigilant of the Chinese nationals' activities in Pakistan. "Human trafficking is a major human rights violation. On the one hand, the government is shutting down western NGOs, on the other they have turned a blind eye to the Chinese nationals who are allegedly involved in human trafficking."

But said that the Pakistani government must not issue a visa-on-arrival to the Chinese nationals. "Pakistanis have to go through a complicated process to get a Chinese visa, but any Chinese national can enter Pakistan without any scrutiny," the rights activist said, adding that China-Pakistan ties should be based on a mutual respect.

Editors' note: The protagonists' names have been changed at their request to protect their identities.

The rape and murder of Zainab Ansari, a seven-year-old Pakistani girl, have shocked the country. People demand justice for the girl's family, but there isn't much discussion on the issue of child protection in Pakistan. (11.01.2018)