At a summit in Fortaleza, Brazil, BRICS countries launched a slew of initiatives, including two new international financial institutions: A new development bank and a joint monetary fund. 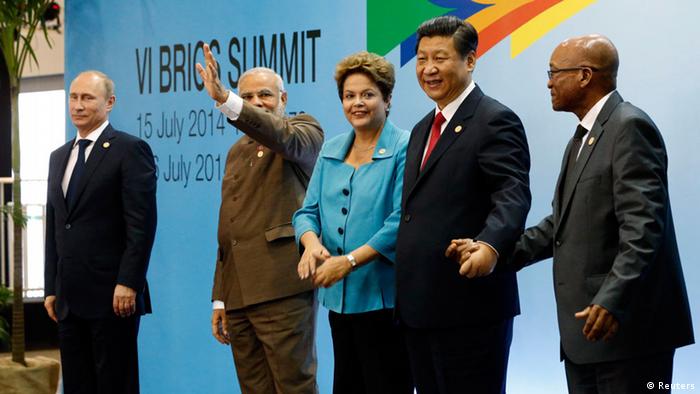 The leaders of five of the world's most populous and powerful emerging countries met this week in the northeastern Brazilian city of Fortaleza to seal deals that could mark an important step in the growth of their global economic power.

On stage at the city's Ceara convention center, Brazil's President Dilma Rousseff sat in the middle, surrounded by her four counterparts, Russia's Vladimir Putin, China's Xi Jinping, Jacob Zuma from South Africa, and India's Narendra Modi. The leaders seemed well pleased with themselves as they looked down into the plenary crowd.

"We're helping to democratize international relations," enthused China's President Xi, adding that all five BRICS countries were "countries of the future" that would enrich the international community with their positive energy and initiatives.

The leaders were not stingy with praise for their meeting's achievements. They celebrated the founding of the BRICS' New Development Bank (NDB) as a "historic moment" and the "growing prestige" of the group, and proclaimed a "new era of global power structures."

The BRICS' agreement on how to fund the new development bank, which will be based in Shanghai, consciously set a counterpoint to the old power structures of the World Bank and International Monetary Fund (IMF). Each of the five BRICS countries will contribute an equal $10 billion share to the NDB's $50 billion capital base, despite big differences in the countries' population sizes and economic weights.

"At the World Bank, the US has a veto. In the BRICS' New Development Bank, all shareholders are equal," said Brazil's finance minister Guido Manteiga. He added that the presidency of the NDB will not be the prerogative of a particular continent; instead, it will change every five years, rotating among the BRICS countries. The first president of the NDB is to come from India.

In addition to the new bank, a new monetary fund was also launched at the Fortaleza summit. The five leaders signed a memorandum establishing a Contingent Reserve Arrangement (CRA) - a $100 billion contingency fund, which member states can draw on in financial emergencies when their foreign exchange reserves become dangerously depleted.

The BRICS countries currently have the world's largest foreign currency reserves, and the new institution offers an opportunity to invest those savings at a profit. China contributed $41 billion to the capital stock; India, Brazil and Russia each paid in $18 billion, and South Africa's share is $5 billion.

Competition for the IMF

The CRA is meant to provide an alternative to International Monetary Fund's emergency lending. In the CRA, emergency loans of up to 30 percent of a member nation's contribution will be decided by a simple majority. Bigger loans will require the consent of all CRA members. 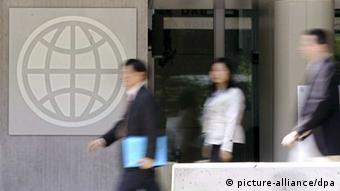 The CRA's establishment is in part driven by the BRICS countries' unhappiness with the lack of progress in reforming the IMF's governance. The US and Europe have dominated the IMF's councils since the Fund's establishment at the end of the World War II, when developing countries had small economies and little say in international affairs.

A draft package of reforms was agreed in 2010, aimed at providing greater representation to emerging countries, reflecting the increase in their relative economic weight. A modest six percent shift of IMF voting rights in favor of developing and emerging nations was among the provisions.

But the draft reforms have not been adopted, because changing the IMF's governance would require the US to pass suitable enabling legislation, and the US Congress has refused to cooperate.

At the annual Spring Meeting of World Bank and IMF member nations in April, a communiqué was released that used unusually blunt language to express member nations' anger at US intransigence. BRICS leaders expressed the same frustration in a communiqué from the Fortaleza summit.

"We remain disappointed and seriously concerned with the current non-implementation of the 2010 IMF reforms, which negatively impacts on the IMF's legitimacy, credibility and effectiveness," it says in the common "Fortaleza Declaration" of the five BRICS nations. "We call for an international financial architecture that is more conducive to overcoming development challenges."

Critics were unwelcome at the summit

Representatives of social movements who met in Fortaleza at a counter-summit also had to deal with some disappointment. They were denied access to the official BRICS meeting, and they were not able to pose questions to BRICS leaders - questions such as what kind of infrastructure projects are to be financed by the New Development Bank, and whether measures will be in place to ensure the projects funded will be socially responsible and environmentally benign. 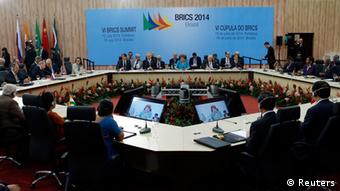 BRICS nations agreed on a slew of initiatives at Fortaleza

Questions from journalists were also generally unwelcome. Only Brazil's President Dilma Rousseff took time for a press conference, in which she praised the "BRICS family" in the highest terms.

"The new bank will stimulate growth within the BRICS group and reduce the huge gap in the financing needs of infrastructure projects. It will be a complement to the IMF and World Bank, not a competition," she said. "This is extremely positive and can make the international banking system more equitable."

The leaders of the BRICS group of emerging nations have signed a deal to create a new development bank and contingency fund. Both are meant to act as counterweights to Western-dominated institutions. (15.07.2014)

The US and Europe are maintaining a clear position: they've condemned the Crimea annexation by Russia. But what do Russia's BRICS partners Brazil, China, India and South Africa think of the Crimea crisis? (06.04.2014)