The leaders of the BRICS group of emerging nations have signed a deal to create a new development bank and contingency fund. Both are meant to act as counterweights to Western-dominated institutions. 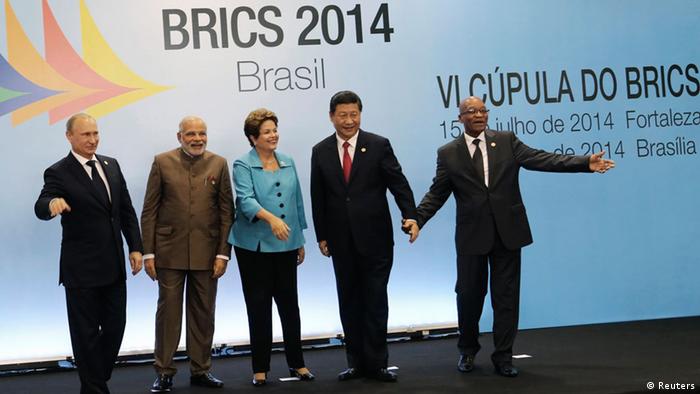 Leaders of Brazil, Russia, India, China and South Africa inked a deal Tuesday to launch a development bank with an initial $50 billion (36 billion euros) and a $100 billion monetary reserve, according to a joint declaration.

Brazilian President Dilma Rousseff said setting up the currency reserve was a priority for the countries to protect themselves from crisis scenarios.

"It will be a kind of security net to increase protection for BRICS countries as well as other countries. It's a question of our security," she said at the summit in the Brazilian coastal city of Fortaleza.

"The development bank is to guarantee the means for investment in infrastructure," Rousseff added. The initial $50 billion in startup capital for the bank, equally shared between all five countries, is expected to grow to $100 billion.

The bank and the fund are meant as an alternative to the Western-run World Bank and International Monetary Fund (IMF), which BRICS nations say need more reform to give emerging nations more voting rights.

The summit will continue Wednesday in Brazil's capital, Brasilia, with leaders from across South America.

Russian President Vladimir Putin has signed a nuclear energy cooperation deal with Argentina during his tour of Latin America. He called Buenos Aires one of Russia's most strategically important allies in the region. (12.07.2014)