Brexit: Crucial day for Boris Johnson and no-deal date — as it happened

The UK Parliament will be suspended Monday evening following a vote on a snap election. The queen has given "royal assent" to a law that aims to prevent a no-deal Brexit. Follow along for the latest from Parliament. 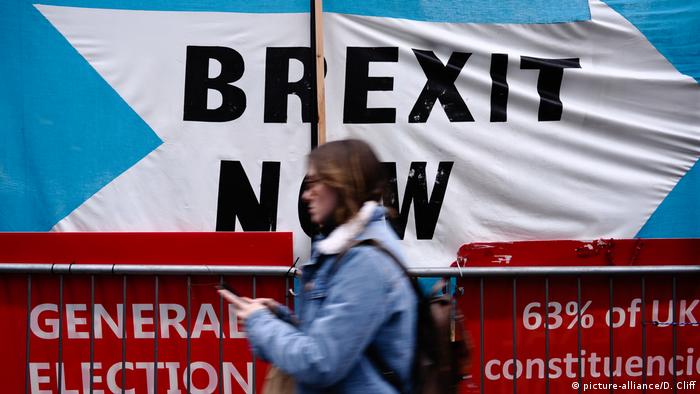 Following a difficult week in Parliament for Prime Minister Boris Johnson, Monday is a key day for Brexit developments. Here's what you need to know:

All times in UTC/GMT

22:08 Labour leader Jeremy Corbyn said the party opposed a new election unless a no-deal Brexit on October 31 was taken off the table.

"We're eager for an election. But as keen as we are, we are not prepared to risk inflicting the disaster of no-deal on our communities."

22.04 Johnson said he would not request a Brexit delay, despite MPs approving a new law that could force him to do so.

21:51 Parliament has begun debating a motion from Prime Minister Johnson asking for an early general election.

20:59 Foreign Minister Dominic Raab said Prime Minister Boris Johnson did not plan to go to Brussels on October 17 to request a Brexit delay.

20:12 Corbyn's motion passed without a vote.

18:43 Labour leader Jeremy Corbyn has opened the debate on a motion concerning the enforcement of the Brexit delay law, which conditionally forces the prime minister to ask for an extension to the October 31 departure deadline.

18:33 The Operation Yellowhammer motion passed with 311 in favor and 302 against. It forces the government to publish no-deal Brexit planning papers and plans to suspend Parliament.

18:14 DIVISION! Lawmakers exit the lobby as they vote for the motion on Operation Yellowhammer.

18:10 Cabinet Office Minister Michael Gove has pushed back against releasing "private correspondences of private individuals" who had given advice as it related to no-deal Brexit preparations. He called the motion unprecedented, saying it was like "fishing — with a trawl."

18:05 British MP Lindsay Hoyle, tipped as the favorite to replace Commons Speaker John Bercow, has officially announced his intention to seek the role.

"Now that there is a vacancy for the Office of Speaker of the House of Commons, I am happy to confirm that I will be standing as a candidate," said Hoyle.

16:25 Parliament begins debating the motion to require the British government to publish documents related to no-deal Brexit plans, including suspending Parliament. The plans are better known by the code name Operation Yellowhammer.

16:14 Opposition Labour leader Jeremy Corbyn requested an emergency debate on the implementation of the law that conditionally forces the prime minister to request an extension of the October 31 Brexit deadline. The speaker grants the debate.

14:39 House of Commons Speaker John Bercow has just announced that he will step down on October 31 if Parliament does not vote for an election today. In an emotional statement to Parliament, he says serving as speaker has been "the greatest privilege of his personal and professional life." MPs from all parties are now paying tribute to him in the Commons. The speaker is an independent lawmaker in the British Parliament.

14:26 The queen has just given royal assent to the piece of legislation that seeks to prevent Boris Johnson from taking the country out of the EU without a deal. This will essentially force Boris Johnson to seek another extension to Brexit.

14:20 The prorogation ceremony itself might not happen until after midnight. The ceremony involves royal assent being given to each outstanding bill in the House of Lords. As tradition dictates, the ceremony will be conducted in the antiquated language of business of UK politics: Norman French.

13:47 Assuming that both of these debates take place, and given the amount of other business in Parliament today, it could be after 2000 (UTC) before MPs even begin to debate the prime minister‛s motion for an election.

13:42 Brexit discussions are set to kick off in the UK Parliament at around 1430 (UTC). Two MPs are then expected to make applications for emergency debates — Labour leader Jeremy Corbyn and Dominic Grieve, one of the deselected Conservative "rebels." Both concern the suspension process. Grieve is aiming for MPs to get access to all documents relating to prorogation and a no-deal Brexit, according to his parliamentary motion.

13:15 Though it is now unlikely that there will be an election before October 31, two MPs have announced that they will not be seeking re-election. Conservative MP Mark Prisk claims that this decision was "not in reaction to Brexit," while Richard Benyon was amongst the 21 "rebels" whom Johnson deselected on September 3. This comes days after the prime minister's own brother announced that he would also be resigning as an MP.

12:52 Welsh party leader Liz Saville Roberts is calling for the impeachment of Boris Johnson. The prime minister has said he would do his best to prevent an extension to Article 50, even if the necessity to ask the EU for an extension became law, as is expected to happen later today. Saville Roberts believes that such a move would be illegal.

12:20 Liberal Democrat party leader Jo Swinson has confirmed that her party, along with other opposition parties, will "not support an election until Article 50 has been extended." Article 50 is the formal legal process which triggered Brexit.

12:00 Global stock markets report a six-week high for sterling of $1.2385. This has been put down to investors seeing the threat of a no-deal Brexit easing, with Goldman Sachs raising the probability of a Brexit deal from 45% to 55%.

11:50 Confused about how Boris Johnson can suspend Parliament, and what proroguing actually means? You can read our explainer here.

11:30 A joint statement from Prime Minister Boris Johnson and Taoiseach Leo Varadkar says that some common ground was established but "significant gaps remain." The two leaders say they are committed to securing a Brexit agreement with the European Union.

11:08 A former Conservative Party special adviser, Jason Stein, tells Sky News that polling carried out by Number 10 Downing Street shows that Boris Johnson and his party could fare worse than his predecessor Theresa May did in the last elections if one were called immediately.

11:01 Incoming President of the EU Commission Ursula von der Leyen announces her chosen commissioners for every EU country. All except for the UK, which did not nominate a candidate, assuming that Brexit will take place on October 31, one day before von der Leyen takes office.

10:40 The spokesman says the prime minister will not "seek an extension" and not sanction any more "pointless delays" to Brexit. "There is a simple way for MPs to resolve this: all they have to do is vote for an election today," he said.

10:38 A Downing Street spokesman confirms that the UK Parliament will be prorogued, or suspended, at the close of business Monday. The suspension will last until October 14 and, according to the spokesman, will take place regardless of the outcome of the government-led vote on holding a snap election.

10:23 Johnson and Varadkar are out of their meeting. "Give me a ring," Johnson apparently called out to the Irish prime minister before leaving. Johnson is now on his way back to London.

09:25 The Dutch government's statistics office revealed data showing "that British companies are moving their activities to the Netherlands because of uncertainty about Brexit." According to the report, foreign businesses are starting to invest less in the UK.

09:20 German Foreign Minister Heiko Maas stated in Berlin that he was awaiting a "clear" message on Brexit from the UK Parliament. "We remain in principle ready to talk, and we have to be in order to make possible as orderly a withdrawal as possible, but that ultimately requires clear decisions and proposals from London." Other EU leaders have expressed dissatisfaction with the idea of a further delay to Brexit.

08:57 Closing his remarks, Johnson described the possibility of a no-deal Brexit as a "failure of statecraft for which we would all be responsible." He added that he was "absolutely undaunted" by what might happen in Parliament in the coming days.

08:55 In response, Johnson remained optimistic that he would be able to secure a deal that pleased all parties at the EU summit in mid-October. "I have one message that I want to land with you today, Leo: that is I want to find a deal, I want to get a deal," Johnson said. "Like you, I've looked carefully at no-deal; I've assessed its consequences both for our country and yours."

08:46 Johnson and Varadkar appeared together to give statements ahead of their meeting. When asked if the European Union had received any alternatives to the so-called backstop provision, Varadkar said: "We haven't received such proposals to date. In the absence of agreed alternative arrangements, no backstop is no deal for us."

08:45 Johnson arrived in Dublin ahead of talks with Irish Prime Minister Leo Varadkar. This marks the first time the two have met since Johnson's election as prime minister in July. Varadkar tweeted that "the stakes are high."

08:10 This morning, the UK's Daily Telegraph reported that Johnson's government was drawing up plans to stop the Brexit extension if there is no early election. "We intend to sabotage any extension," a Downing Street source told the paper. Alongside the official request for an extension as set out in the new law, Johnson would reportedly enclose another letter emphasizing that the UK government does not want another delay.

08:00 Welcome to live updates for another important day in Brexit developments. Following Prime Minister Johnson's visit to Dublin, he will face the House of Commons later in the day.

Amber Rudd, the UK work and pensions secretary, has resigned, citing her disagreement over a possible no-deal Brexit as the reason why she chose to leave Prime Minister Boris Johnson's government. (07.09.2019)

Britain's Boris Johnson said the UK and EU need to "step up the tempo" with biweekly Brexit talks. Germany expects a no-deal exit — and the government is already prepared for it, Foreign Minister Heiko Maas said. (30.08.2019)