Amber Rudd, the UK work and pensions secretary, has resigned, citing her disagreement over a possible no-deal Brexit as the reason why she chose to leave Prime Minister Boris Johnson's government. Amber Rudd, the UK work and pensions secretary, resigned from government in protest on Saturday. She stated in a tweet that she could not stand by while loyal conservatives were expelled. Making public her resignation letter in a tweet, she also cited a Brexit no-deal disagreement with UK Prime Minister Boris Johnson as a reason for stepping down.

Her resignation marks a further setback for Johnson after he expelled 21 Conservative party members from the party after they defied the whip, siding with the opposition in a decisive Brexit vote.

In her resignation letter, Rudd wrote, "I cannot stand by as good, loyal moderate Conservatives are expelled. She added that she remained committed to "the One Nation values that drew [her] into politics."

Despite being a supporter of a deal with the EU, she accepted the possibility of a no-deal Brexit when she joined the Cabinet, yet in her resignation letter she emphasized, "I no longer believe leaving with a deal is the government's main objective."

Rudd told The Sunday Times she will quit the Conservative party and will sit as independent in her constituency.

The resignation concludes a decisively stormy week for Johnson as leader of the Conservative Party that saw MPs reject both his bid for a general election, as well as the key vote to stop legislation that would prevent Britain from leaving the European Union without a divorce deal. The latter saw the mass rebelling of the 21 MPs who were then sacked from their party. 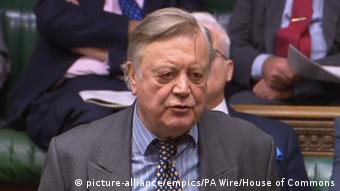 Ken Clarke, the longest-serving Conservative in Parliament, was among those sacked from the party this week

Johnson's brother Jo also left the Conservative party this week saying he had been "torn between family loyalty and the national interest."

Johnson has been adamant that the UK will leave the EU on the agreed leave date of October 31, saying that he would rather be "dead in a ditch" than seek a postponement, which he sees as leaving the government and Parliament with no obvious solution.

To break the Brexit deadlock, he attempted several new approachesincluding proroguing Parliament  and calling for a general election. There is due to be a further vote on whether to hold a general election on Monday, where Johnson needs two-thirds of the House of Commons to vote in favor of the motion.

However, Labour and other opposition parties have said they are unwilling to send Britons back to the polls unless Johnson is left unable to take the UK out of the European Union on October 31 without a withdrawal agreement.

Among the 21 lawmakers who were sacked from the Conservative party were several prominent members including Winston Churchill's grandson and MP, Sir Nicholas Soames, as well as Philipp Hammond, the conservative party former chancellor, and the longest-serving Conservative in Parliament, Ken Clarke.

UK PM Boris Johnson's plan to lead his country out of the EU by the end of October has met a stinging defeat in the lower house. London is in disarray, but Brussels says it is prepared for all eventualities. (05.09.2019)