Brexit: House of Lords approves bill to block no deal

The UK House of Lords has approved a bill that aims to block the possibility of a no deal Brexit happening in October. The bill is expected to pass into law on Monday. 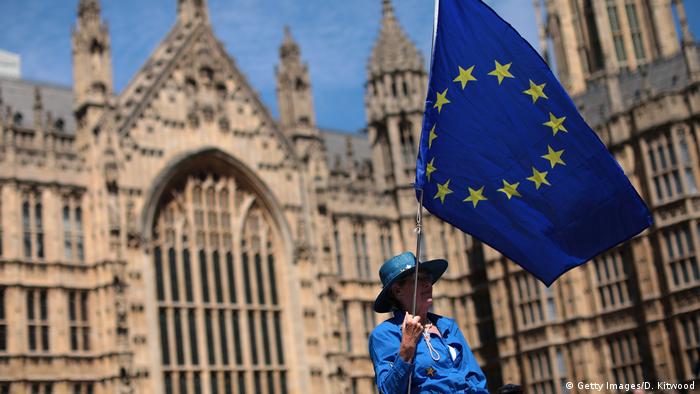 The unelected upper house of the UK Parliament, the House of Lords, approved a bill on Friday which seeks to block the possibility of a no deal Brexit in October. The bill will force Prime Minister Boris Johnson to delay Brexit if no deal has been agreed with the EU by October 31.

The legislation was approved without a formal vote in the House of Lords. The bill is expected to be signed into law by the Queen on Monday.

Britain's lower house of Parliament, the House of Commons, approved the bill on Wednesday, despite Johnson's strong opposition. He claimed that it would mean "years of uncertainty and delay" because it requires him to seek a further postponement to Brexit. He went on to dub it a "surrender bill."

Johnson says he is determined to leave the EU on October 31, even without a deal.

The new bill obliges the prime minister to ask the EU for an extension to Brexit unless the House of Commons has approved either a withdrawal agreement or a statement that the UK is to leave without a deal. The latter would be an increasingly remote possibility after defections from Johnson's Conservative party.

"If neither of these conditions is met," the bill says, it  "would require the Prime Minster to send a letter to the President of the European Council requesting an extension to article 50 until 31 January 2020."

It further requires a detailed report in November as to the state of negotiations with the European Union.

Finnish Prime Minister Antti Rinne, whose country now holds the rotating EU presidency, said he doesn't believe it is possible to make any sort of deal with the UK now because of the "mess" Brexit has become.

"I hope that we can reach a situation where this (Brexit) can be solved so that there is no mess, but it seems not possible now," he told reporters in Helsinki. "The situation in Britain is quite a mess now. We don't know what's happening there. It seems very obvious that we are not getting Brexit with an agreement."

Johnson had been demanding a new election before a summit with the EU in October. However, Labour and other opposition parties said they would not support such a plan unless they had assurances that the prime minister would not force a no-deal Brexit.

Following the meeting with Labour, the Scottish National Party and Welsh party Plaid Cymru, a spokeswoman for the Liberal Democrats said that "as a group we will all vote against or abstain on Monday."

Johnson had already lost a similar vote on Wednesday.

"All I see is (Labour leader Jeremy) Corbyn and the SNP clubbing together to try and lock us into the EU when it's time to get this thing done," he said. "It's the most sensational paradox. Never in history has the opposition party been given the chance for an election and has turned it down."

Quadriga - Brexit: The End of the Road for Johnson?

British lawmakers have rejected Boris Johnson's call for a general election after the opposition abstained from the vote. The PM called for an early election, saying he has lost a governing majority. (04.09.2019)

Bloomberg's allegations that Nigel Farage may have influenced forex markets to help hedge funds on Brexit referendum night in 2016 have not gone away. We ask if something similar could happen on October 31? (15.07.2019)