British lawmakers have rejected Boris Johnson's call for a general election after the opposition abstained from the vote. The PM called for an early election, saying he has lost a governing majority. 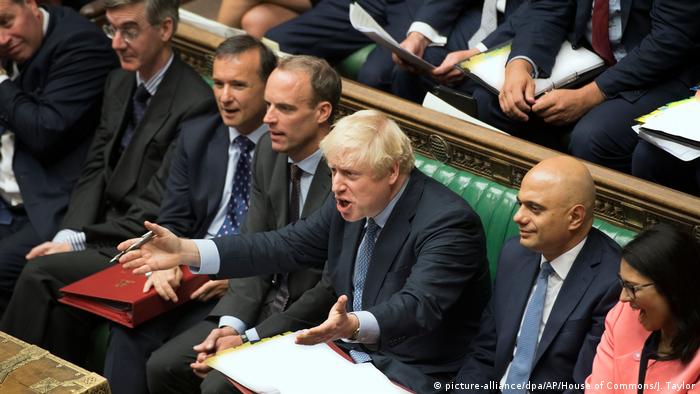 All times in UTC/GMT

00:56 The Conservative and Labour parties have agreed that all stages of the bill to stop a no-deal Brexit from occurring on October 31 will be completed in the House of Lords by Friday at 5 p.m.

21:48 Labour leader Jeremy Corbyn said his party will not support an election before October 31, the day the UK is currently set to leave the European Union, a spokesman told the BBC.

20:36 The House of Commons has voted against a motion for a general election, with 298 in favor and 56 against. It did not reach the two-thirds majority necessary to pass.

19:55 Now that the opposition's bill is through, MPs are readying for the last major vote of the evening — on PM Boris Johnson's motion for an election on October 15. The government would need a two-thirds majority for this to pass. Labour has said that it will not support the motion, probably by abstaining, meaning that it would be quite a shock if the motion passed. At least for now.

19:03 Despite his recent appeals for a general election, Labour leader Jeremy Corbyn has refused to back an early poll on these terms. Instead, he said that Johnson should publish his definitive plan on how to leave, and then put that to a referendum.

"Johnson is offering with an election the poison of a no-deal," Corbyn said. "I look forward to the day that his government, his party ... are turfed out of office."

18:58 Prime Minister Boris Johnson said there must be an election on October 15 that way a prime minister with a mandate can head to an EU summit days later.

"The government cannot function if parliament refuses to pass what it proposes," Johnson said. "There must now be an election on Tuesday, 15 October."

Read more: Can a new pet save Boris Johnson?

18:51 British lawmakers have backed a third reading of the Brexit delay bill. The tally was 327 in favor and 299 against.

The draft legislation now goes to the Houses of Lords for approval, which could take days. If amended by the Lords, it would then need to be approved again in the Commons. Only then would the bill be ready to go to Buckingham Palace for the Queen's signature to become law.

18:49 The last amendment passed. In an odd turn of events, it gives British lawmakers the power to vote on former-Prime Minister Theresa May's draft Withdrawal Agreement. That deal was voted down three times before May resigned.

Johnson had voted in favor of May's deal on the third vote.

"The delay and denial by too many MPs on delivering the people's Brexit decision must now be concluded," he said. "Cynically and hypocritically Labour along with defectors won't support due to their fear of accountability."

Labour has signaled their intention to not vote in favor of a general election until the October 31 Brexit deadline is extended.

18:31 "DIVISION!" The last vote on a proposed amendment to the bill appears to have been skipped after all. Now we're going into the vote on the third reading of the bill. If it passes, it would then proceed to the House of Lords for approval, which could conceivably take several days. If amended by the Lords, it would then need to be approved again in the Commons. Only then would the bill be ready to go to Buckingham Palace for the Queen's signature to become law.

18:22 MPs strike down the first amendment, which would have paved the way for a no-deal without parliamentary consent. The tally was 65 for and 495 against.

18:11 MPs are voting for amendments to the Brexit delay bill. The first one, dubbed Amendment 19, would allow a no-deal to occur without permission from Parliament.

17:47 Away from the House of Commons in private talks with the Conservatives' influential 1922 Committee, British media reported that Johnson said he could not restore the status of 21 MPs because he can't undermine the chief whip.

According to one of the most prominent MPs to be kicked out, Nicholas Soames, the chief whip had told him that removing him from the Tory benches would be his "sad duty" — at least suggesting it wasn't entirely the decision of the party's chief disciplinarian.

17:21 Asked to comment on the latest about Brexit, US President Donald Trump said: "Boris knows how to win."

16:20 The second reading of a law to extend a deadline for Brexit past the current October 31 deadline has been approved, with 329 in favor and 300 against.

15:51 Prime Minister Boris Johnson will open the debate on a general election later this evening, according to his spokesperson.

"The prime minister, while not wanting an election, believes that if his negotiating position has been destroyed then that should be tested at an election and the public should be able to decide on the next steps forward," said the spokesperson. 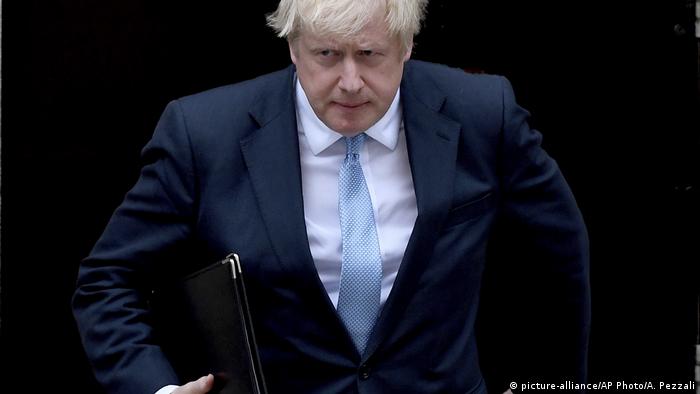 15:15 Philip Hammond, the former finance minister in Theresa May's government, said Parliament must act to prevent a no-deal Brexit, saying such a departure from the EU would be disastrous for the UK. Hammond was one of 21 Tory lawmakers who voted against the government on Tuesday and was stripped of his status as a Conservative MP for it.

15:09 Labour's shadow Brexit secretary, Keir Starmer, said his party wants to ensure that the UK avoids a no-deal Brexit before it backs a general election.

14:59 British Prime Minister Boris Johnson's spokesman said that if elections are necessary, they should take place before an EU summit slated for October 17 and 18.

13:37 The Bank of England updated one of its possible scenarios on the UK's departure from the EU with new data on inflation, saying a no-deal Brexit would have a "less severe" impact on the economy.

12:59 Not all Conservatives, or in Douglas Carswell's case, former Conservative who defected to UKIP and then became an independent, are downbeat at the ejections. The committed Brexit supporter comments that while the Conservatives have lost their majority in parliament, they're not faring as badly in the polls.

Johnson's apparent strategy for an election, if one comes, is to try to court as much of the pro-Brexit vote as possible and take a bite out of Nigel Farage's newly formed Brexit Party. Should the more Remain-inclined voters remain divided between Labour, the Liberal Democrats, and the Greens in a few urban constituencies, Johnson's election gamble could, in theory, pay off. Assuming that Parliament consents to a vote taking place, that is.

12:46 Remember the Rory Stewart bid for the Conservative leadership? Its most successful component was small videos posted to social media and labeled #RoryWalks. The leadership bid may be no more, but the videos endure, and Stewart is strongly hinting he won't be leaving the party without a fight:

"This is just to say to Cumbria, that although some bits of the Conservative Party have left me, I'm not planning to leave the Conservative Party, still less my constituents," Stewart says, before outlining his weekend plans when he'll be back in his rural farming constituency near the Scottish border. He mentions the risks to British agriculture in the event of a "no-deal" Brexit in his video, also describing goings-on in Parliament as "pretty mad."

12:38 As Sajid Javid outlines the government's spending plans, all of which could be put on ice if a vote does follow, the broader Conservative Party continues to reel at losing 21 MPs after a single vote. Ruth Davidson was never in the House of Commons; until recently, she was leader of the Conservative Party in Scotland, where she had presided over a mini-revival in recent years after decades in the doldrums. She got out before the fireworks truly started, quitting last week citing a desire to spend more time with her new baby and her partner. However, the writing was already on the wall when she decided to leave. This morning, she took to Twitter to ask "How, in the name of all that is good and holy, is there no longer room in the Conservative Party for Nicholas Soames?"

Both Soames, the grandson of Winston Churchill, and fellow soon-to-be-former Tory MP David Gauke were among those who chose to share Davidson's message as well.

12:20 Ireland's foreign minister says Britain has not yet presented any solutions to solve the backstop impasse. Simon Coveney spoke to reporters after Boris Johnson told Parliament that substantial progress was being made.

"This process cannot move forward unless and until the British government comes forward with actual proposals that make sense so we can interrogate them," Coveney said.

12:05 The UK's Finance Minister Sajid Javid is unveiling the government's spending plan for the coming year. He begins by discussing Brexit, but is told he is "out of order" by Speaker John Bercow. Javid is told to instead focus on the spending review.

11:58 The pound has rebounded further, but gains were capped by investor anxiety after Brexit turmoil sent the currency tumbling and set the stage for a potential snap UK election next month.

11:40 Johnson has urged opposition lawmakers to back his plan for a snap election on October 15 if, as expected, lawmakers back a bill to prevent a no-deal Brexit.

The prime minister was earlier reminded by speaker John Bercow of the need to respect parliamentary rules after he referred to Corbyn, against convention, directly by name.

During Prime Minister's Questions, Johnson referred to Corbyn as a "chlorinated chicken," after the Labour leader challenged him over the details of a US trade deal.

11:30 Ian Blackford, leader of the Scottish National Party in Westminster, complains that Boris Johnson has failed to give answers during Prime Minister's Questions.

"I know he's a new boy," Blackford quips. "We ask the questions. He's supposed to answer them."

It's been a stormy half-hour for Johnson, who Blackford accuses of "bliff and bluster" and having no mandate for no-deal. 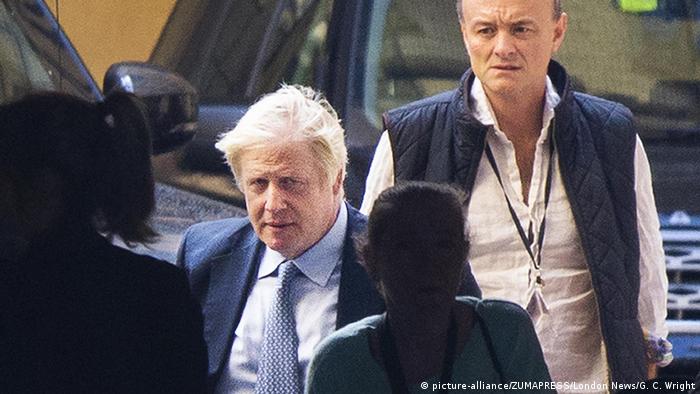 11:20 At Prime Minister’s Questions, Boris Johnson refers to the Labour legislation as a "surrender bill" after opposition leader Jeremy Corbyn asks what the government’s strategy is. Johnson says he aims to get a deal by October 17, but says preparations for no-deal are very advanced.

Johnson claims the bill would "undermine this country's ability to negotiate" with the European Union. "This government is going to get a deal from our friends in Brussels," he says.

UK Prime Minister Boris Johnson is pushing for a new general election after losing a historic vote in parliament on Tuesday evening to block a no-deal Brexit.

Lawmakers voted 328 to 301 to take control of parliamentary business in order to debate a bill on Wednesday that would prevent Johnson from taking the UK out of the European Union without a withdrawal agreement on October 31.

Johnson has repeatedly said he intends to pull the UK out of the bloc in just a few weeks' time, even without a deal in place. Many lawmakers, including several in Johnson's Conservative Party, are concerned that crashing out without a deal would be disastrous for Britain's economy and lead to medicine, food and fuel shortages.

Thousands of protesters have condemned Boris Johnson for taking an "undemocratic" decision to suspend Parliament. But he has defended his actions, saying he needed a clean slate to prioritize "our domestic agenda." (31.08.2019)