After hours of heated debate, UK Prime Minister Boris Johnson lost a major vote in Parliament that could force him to delay Brexit. The PM is now pushing for a snap election, but he'll need a majority of MPs to do so.

UK Prime Minister Boris Johnson is pushing for a new general election after losing a historic vote in Parliament on Tuesday evening to block a no-deal Brexit.

Lawmakers voted 328 to 301 to take control of parliamentary business in order to debate a bill on Wednesday that would prevent Johnson from taking the UK out of the European Union without a withdrawal agreement on October 31.

Johnson has repeatedly said he intends to pull the UK out of the bloc in just a few weeks' time, even without a deal in place. Many lawmakers, including several in Johnson's Conservative party, are concerned that crashing out without a deal would be disastrous for Britain's economy and lead to medicine, food and fuel shortages.

The contentious vote in the House of Commons came after Johnson moved to suspend Parliament for several weeks leading up to the October 31 deadline. On Wednesday morning a judge at the Court of Session in Edinburgh ruled in favor of Johnson's decision to suspend parliament, providing some breathing space for the prime minister. 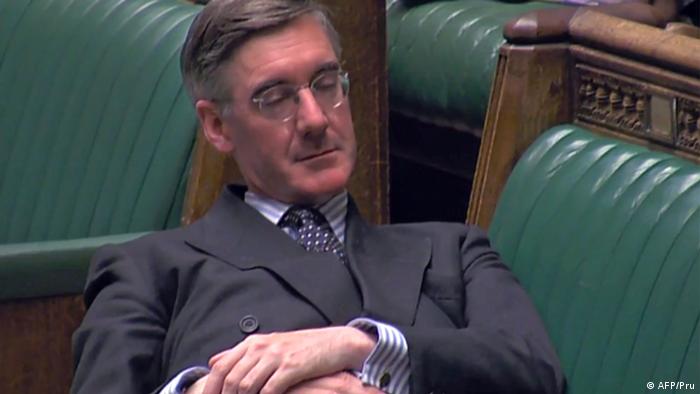 Brexiteer Jacob Rees-Mogg was criticized for napping during Tuesday's debate

The deciding factor in Tuesday's vote came from rebel Conservative lawmakers who voted against Johnson's government despite the threat of being thrown out of the party.

Some 21 Tory MPs voted to support the plan to halt a no-deal Brexit. Among them are Nicholas Soames, the grandson of Britain's World War II leader Winston Churchill, as well as two former finance ministers: Philip Hammond and Kenneth Clarke.

Soames told the BBC that he has only voted against a Tory government three times during his 37 years as a Conservative MP and that he would not be running again as a candidate in the next election.

Johnson suffered a further defeat earlier on Tuesday when he lost his one-seat majority in the House of Commons. Conservative MP Philip Lee dramatically defected to the Liberal Democrats while Johnson was addressing Parliament.

While Johnson and British lawmakers lock horns over Brexit policy, the EU is continuing to prepare for the worst.

A spokeswoman for the European Commission said that they are operating on the "working assumption" that the UK will leave the bloc at the end of October.

On Wednesday, the Commission will present a proposal to offer financial support for EU businesses, workers and farmers that would be hardest hit in the event of a no-deal.

The EU plans on using the European Solidarity Fund, which is normally used to help victims of natural disasters, as well as the European Globalization Adjustment Fund to help workers who may be dismissed if the UK crashes out without a deal, according to documents seen by Reuters news agency.

One of the major sticking points has been over the so-called backstop to ensure that there is no physical border between Northern Ireland and the Republic of Ireland.

Johnson wants it taken out of the current withdrawal agreement, telling German Chancellor Angela Merkel and French President Emmanuel Macron that he has an alternative.

The EU said it has not yet received a proposal from the British government about overcoming an impasse.

Election 'the only way to resolve this'

Johnson painted lawmakers' attempts to thwart a no-deal Brexit as a bid to force the UK to "surrender" to the EU and hand over negotiations to Brussels — saying it left him no choice but to call a new election.

"I don't want an election, but if MPs vote tomorrow to stop the negotiations and to compel another pointless delay of Brexit, potentially for years, then that will be the only way to resolve this," Johnson said shortly after the vote on Tuesday.

Labour leader Jeremy Corbyn fired back that any backing for a snap election would need to be contingent on no-deal being taken off the table.

"There is no consent in this House to leave the European Union without a deal. There is no majority for a no deal in this country," Corbyn said.

Should the snap election be approved in Parliament, it would likely be held just days before a key EU leaders' summit in Brussels on October 17 and 18.

Britain's Boris Johnson said the UK and EU need to "step up the tempo" with biweekly Brexit talks. Germany expects a no-deal exit — and the government is already prepared for it, Foreign Minister Heiko Maas said. (30.08.2019)

British Prime Minister Boris Johnson has urged his own Conservative MPs not to support an opposition maneuver to block a "no-deal" Brexit. The UK Parliament is set for heated debate when it reconvenes on Tuesday. (03.09.2019)